Timothée Chalamet reluctantly takes the throne in first trailer for The King: Watch 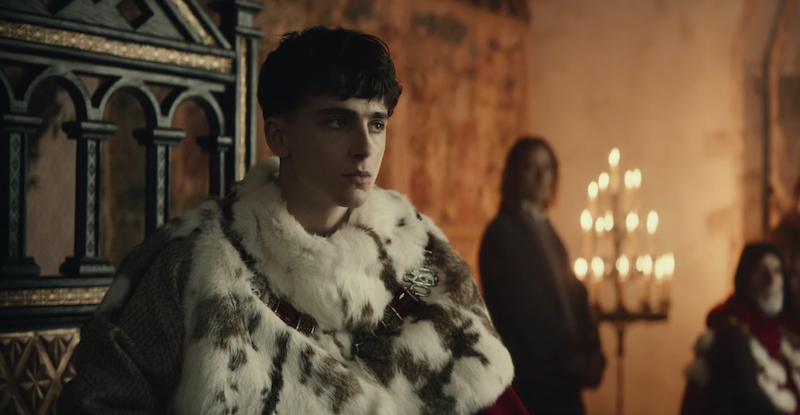 Heavy lies the crown on Timothée Chalamet in the new trailer for The King. The Call Me by Your Name actor stars as Henry V in Netflix’s upcoming period epic, and as the preview alludes to, it’s not easy being king.

The King is an adaptation of three-fourths of Shakespeare’s Henriad (Henry IV, Part 1, Henry IV, Part 2, and Henry V) co-written by director David Michôd and co-star Joel Edgerton. Chalamet’s Henry begins as a defiant prince named Hal who scorns royal life, only to find himself thrust into power upon the death of his father, King Henry IV (Ben Mendelsohn). With his trusted but alcoholic mentor Falstaff (Edgerton) at his side, the young King must navigate the political chaos his predecessor left behind.

It’s heavy Shakespearian stuff, but Michôd has built an impressive cast around Chalamet to help carry the load. In addition to Edgerton and Mendelsohn, Robert Pattinson plays Louis, the Dauphin of Viennois; Lily-Rose Depp stars as Henry’s romantic foil, Catherine of Valois; Sean Harris appears as Michael Williams; and Dean-Charles Chapman takes on the role of Thomas of Lancaster.

The film is set to premiere out-of-competition at this year’s Venice Film Festival, which runs August 28th-September 7th. It will then screen in select theaters this fall and be streamable on Netflix. Watch the trailer for The King below.

This is just one of two award season period dramas Chalamet has coming out; he also stars in Greta Gerwig’s Little Women adaptation. The in-demand actor also recently wrapped filming on the highly anticipated Dune movie from Denis Villeneuve.

Here’s the official synopsis for The King:

Hal (Timothée Chalamet), wayward prince and reluctant heir to the English throne, has turned his back on royal life and is living among the people. But when his tyrannical father dies, Hal is crowned King Henry V and is forced to embrace the life he had previously tried to escape. Now the young king must navigate the palace politics, chaos and war his father left behind, and the emotional strings of his past life — including his relationship with his closest friend and mentor, the aging alcoholic knight, John Falstaff (Joel Edgerton).