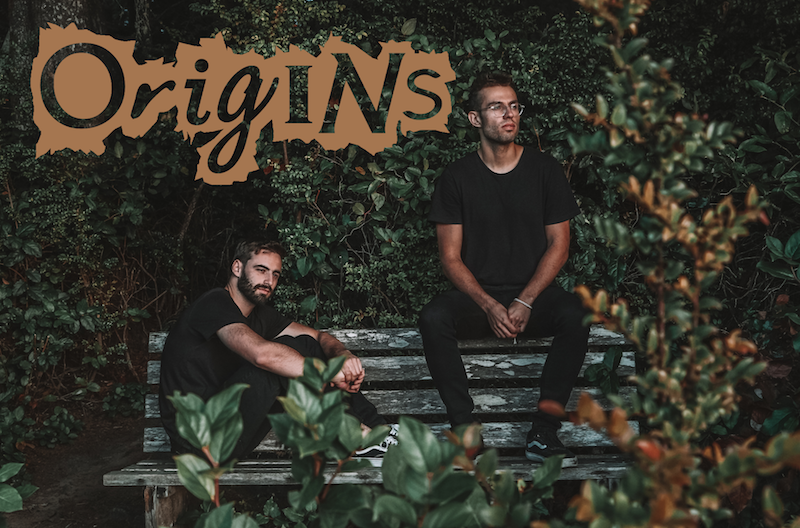 Origins is a recurring new music feature in which artists are presented the chance to pull back the veil on what influenced their latest track. Today, slenderbodies prepare for their “arrival”.

The title of slenderbodies’ debut album, Komorebi, can’t be directly translated into English. It’s a Japanese word identifying the feeling one gets when watching light cut its way through the branches and leaves of a tree. We all know that intimate, calming feeling such a natural beauty creates — and tracks like the slenderbodies’ latest, “arrival”, capture it in their distinctly atmospheric alt-pop style.

“arrival” actually arrives on a droning synthesizer that breathes like the wind. Like a woodsy alt-J, the duo’s airy vocals lift and fall over an increasingly upbeat meditation of guitars and slow beating percussion. There’s a serenity in the composition that feels natural despite its electronic elements, slenderbodies’ radiant voices gently dancing between the shifting, interlocking notes as they sing, “You’re stranded right where you belong/ And maybe its intentional/ Maybe its not bad at all.”

Take a listen to slenderbodies’ “arrival” below.

Komorebi is out September 20th via Avant Garden Records. slenderbodies will kick off their US tour supporting the effort a week later, and you can find tickets here.

For more on what led slenderbodies to the peaceful sounds of “arrival” and the record as a whole, they’ve broken down the Origins of their latest single.

Our process writing Komorebi began after attending this incredible festival in Mendocino, CA put on by Escape the Routine. At the time we were starting our journey into the music industry and so we were spending a lot of time in LA doing sessions and looking for a new sound to pursue. The festival was a lovely interruption to all that, replacing all the noise of the city with the sounds of nature as we connected with new and old friends over the short span of a weekend. In a lot of ways, the festival catalyzed our new sound and concept for the album, prompting us to think about the importance of nature, our values and connections and ultimately return to Mendocino to finish the record. “arrival” was the first song we wrote after our time at Solaura.

Following our time at Solaura we took a brief writing trip to Santa Cruz, CA. This was where the entire album was conceptualized, as we settled on making Komorebi a time capsule of an album for our future selves. We decided the whole record would be a reflection on what is most important to us, our morality and our passions, personified or adapted to individual stories for the record. “arrival” (in parenthesis komorebi spelled out in kanji) was made to be the title track as its concept explores what you might tell a baby as it first comes into the world if it could fully understand you. We sought to make a thesis for our album and tie in the themes we would explore throughout the whole album we had yet to write. These themes ended up being a reverence for the outdoors, the importance of intimacy and community, love for music and art, and gratitude for the simple gift of our bodies and minds. Ultimately, we thought if we could tell the child one thing, it would be to wait until life has transpired before you try to judge any one part of it.

Mendocino is situated on the upper coast of California, relatively isolated and wildly beautiful. It’s a place where coastal redwoods line rugged pacific beaches, and wildlife is abundant, yet the coast is peaceful. It’s one of the most beautiful places in the world to us, and inspired the soundscape of the album with the samples we used as well as the trajectory of “arrival” as we wrote the song with the area in mind.

We took a ton of inspiration from the way Rhye sound designs and mixes his records. We wanted the album to be present yet spacious, full of air yet present. His 2013 album Woman accomplishes this masterfully, especially in the way of using reverb. Although our “arrival” is a lot more wet in terms of effects, Woman’s emotive quality through soundscape was definitely something we thought about frequently while making the track.

Local Natives — “Who Knows Who Cares” and “Wide Eyes”:

Local Natives has been an influence for so many years, but these two songs in particular were an absolute driving force behind “arrival”. They capture a beautiful wistfulness, bliss and accepting nostalgia, and slight bit of unease. Between the two of them is a wonderful picture painted of life, as the duality of these two moods influenced us in writing “arrival”. The heavy use of choral stacked vocals, easily recognizable guitars and huge outros were absolute guiding forces when conceptualizing “arrival”.