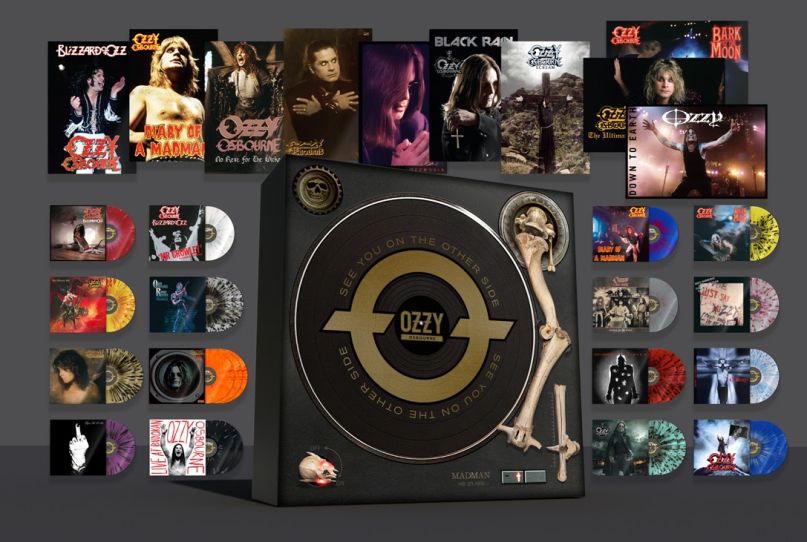 Ozzy Osbourne's See You on the Other Side Box Set

Ozzy Osbourne is collecting his solo discography in a new comprehensive vinyl box set, See You On the Other Side, which will arrive this fall. The decadent set retails for $499.99 and includes 16 albums across 24 pieces of wax, including B-sides, live albums, and numerous goodies.

The box, which comes out November 29th, includes every studio album from 1980’s Blizzard of Ozz through 2010’s Scream, as well as the Tribute, Live & Loud, and Live at Budokan live albums, the Mr. Crowley and Just Say Ozzy EPs, a new B-side LP of non-album tracks, and a 7-inch flexi-disc that includes an unreleased version of the track “See You On the Other Side”. Additionally, Live at Budokan will see its first vinyl press in this box set, and No More Tears will be spread across 2 LPs for the first time. The only thing missing is the Speak of the Devil live album from 1982, which includes only songs originally by Black Sabbath and no original Ozzy solo material.

“This one’s the most elaborate collection so far,” Ozzy said in a press release. “It’s very well thought-out and well put together. It’s got everything in there that you possibly could want and some surprises along the way. The sound of a vinyl record is different, and I do believe that vinyl sounds better.”

In addition to the massive amount of vinyl, the set also houses 10 posters — one for each studio album — measuring 24″ x 36″, an Ozzy autographed vellum certificate, and 12 “augmented reality triggers” inside the box set that lead to “rare live performances and exclusive video content.”

Pre-orders are currently available here. Check out the hilarious infomercial for the box set featuring guitarist Zakk Wylde, as well as the list of vinyl included and the B-side LP tracklist, below.

Flippin’ The B Side LP Tracklist: