Kid Rock baselessly attacks Taylor Swift, says she’s political “because she wants to be in movies”

Added the irrelevant rocker, "And it looks like she will suck the door knob off Hollyweird to get there" 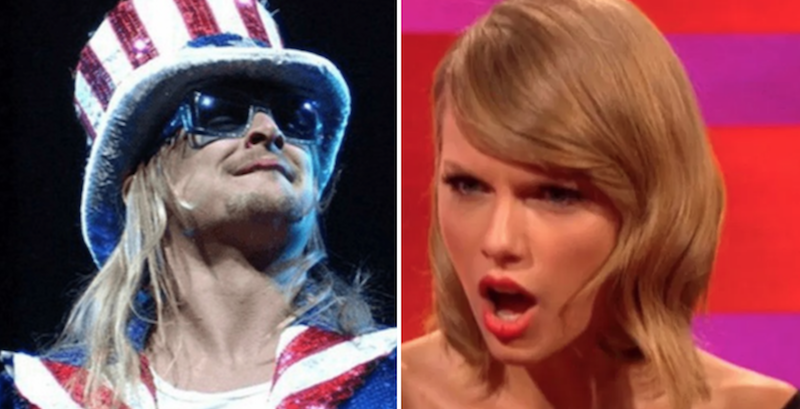 While Taylor Swift chose to remain silent during the 2016 election, Kid Rock buddied right up to Donald Trump. Although whether Swift’s decision was actually a shrewd one is debatable, at least she’s not aligned with a president who’s used as an excuse for fracturing a 13-year-old’s skull. Now that she’s vowed to get more political, however, Kid MAGMA has seen it fit to attack Swift for trying to gain Hollywood clout.

In a completely unprovoked tweet, Kid Rock wrote, “Taylor Swift wants to be a democrat because she wants to be in movies….period.” He went on to get needlessly sexist and regressive, adding, “And it looks like she will suck the door knob off Hollyweird to get there.” And then he signed the Tweet, as if to say, “Yes, I will stand by this ridiculous and baseless comment 100%.”

Taylor Swift wants to be a democrat because she wants to be in movies….period. And it looks like she will suck the door knob off Hollyweird to get there. Oldest move in the book. Good luck girl.

Kid Rock, whose film credits include Joe Dirt and Biker Boyz, is clearly referring to Swift’s upcoming role in Cats. Considering how mega-famous Swift is, it’s safe to say she could have her pick of Hollywood roles even if she was an avowed anarchist. Why an irrelevant rap-rocker would feel the need to go after her so vulgarly just because she has a different political stance then he does probably says more about his side than hers.

Anyway, while Swift hasn’t responded, we have a good guess what the pop star would have to say: