Jhonen Vasquez’s animated series grows up with Zim, Dib, and the rest of the gang 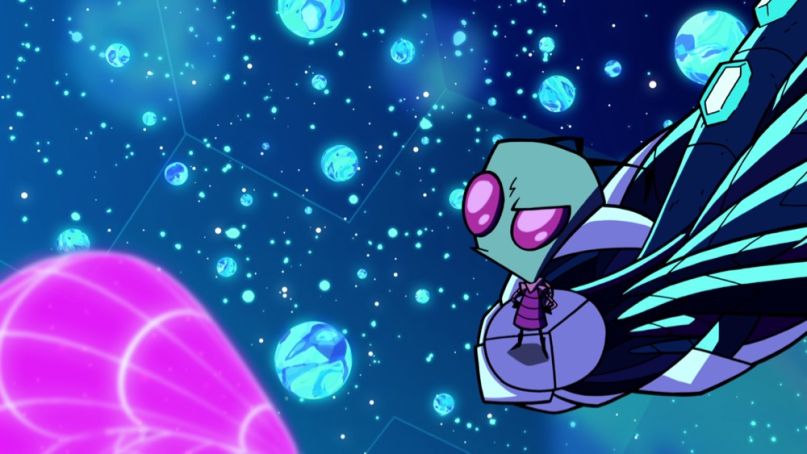 The Pitch: In 2019, the cult of strange bedfellows culminates in mainstream media’s lust after reboot culture and none other than Invader Zim. Of course, this tracks with the program’s history: In 2002, beloved kids network Nickelodeon sent Zim to Earth in hopes of tapping a pre-teen market. They did so by way of creator Jhonen Vasquez, the man behind Johnny the Homicidal Maniac and Squee, two equally grisly and wicked comic series soaked in a grayscale bloodbath. Makes sense.

For just 27 episodes, an inept megalomaniacal alien successfully posed as a child on Earth in order to prime the planet for an eventual takeover by the Irken Empire. As the cosmic joke of life would have it, no one — except for Zim and his earthly nemesis, Dib — could care less about their angst or ambitions. Thus, Invader Zim existed as a microcosm of the pre-teen experience. And hey, who are we kidding? The human experience at large.

Just as navigating the rush of emotions is never easy in those formative years, so is steering the comedic spaceship into successful television territory. Let alone the dastardly asteroid belt of nostalgic throwbacks. Alas, Invader Zim: Enter the Florpus does just that with something for old and new viewers alike. Zim is finally back and his plan to enslave the Earth? It could happen.

The Usual Suspects: Years passed. Zim seemingly vanished from the planet. Dib sits obsessively at a wall of monitors, biding his time until his alien foil returns. The oldest child of the Membrane family’s purpose in life and in plot — to thwart Irken domination — still holds an iron grip on his heart and mind. His hygiene habits have followed suit. It may be 2019, but Dib hasn’t quite got the self-care memo. Luckily, his dispassionate younger sister Gaz (dressed in a hazmat suit to enter his room) takes no prisoners in chiding her brother. Of course, in true Vasquez fashion, Zim instantly appears, enjoying some run-of-the-mill aerobic stretching in his front yard.

Invader Zim’s ragtag gang of misfits is still intact and playing out the subtle satirical smeers to the same stunning, slimy animation. Dib and Zim are narcissistic as ever. The Earth remains a derelict hellscape. Its mindless inhabitants are ravaged by the evils of consumerism but look forward to the next Apple-esque Keynote for benediction. Somebody pinch me.

By sticking to these guns, Enter the Florpus cracks the nostalgia code. With the original cast and crew intact, Vasquez knows his strengths and plays to them. There are no new faces, no unfamiliar, out of this world (pun intended) character arcs. The film stays true to the source material’s ethos, staring down the barrel with intense focus on its plotline. Enter the Florpus shoots a stealthy bullet that never veers off into space to waste time and isn’t afraid to charge full speed ahead. Bullseye.

Daddy Issues: Enter the Florpus delivers more than just a few genuine laugh-out-loud moments by way of leaning on the absurd to augment its growing pains. But it does so with a little more compassion for its outcasts than the original series. Emotionally resonant exchanges propel the film forward while plumbing the depths of Zim and Dib’s inner turmoil.

Like all good arch-nemeses, Dib and Zim are two sides of the same coin. Zim was, if you’ll recall, unknowingly banished to Earth by the Almighty Tallest after almost annihilating his entire race. Ignorant to the fact that his bosses loathe him, he remains hell bent on proving his worth as an invader. Our favorite alien protagonist’s blissful bubble is brutally popped in the series’ feature-length companion, and he must wrestle with the inner turmoil that comes with rejection.

Meanwhile, Dib still desperately seeks the approval of his famous scientist father who is largely absent from his life. So much so that he will go, quite literally, to the ends of the Earth to secure it. With the world in real danger, and death at the Membrane doorstep, Dib reaches out for fatherly recognition one last time in the most sincere moment any of Zim’s cast have ever seen.

The Verdict: Invader Zim grows up with its characters, seeing them work through longing, rejection, and unmatched ambition despite incessantly wanting to murder one another. Hey, if you’ve ever worked in an office, you might know this emotional flux well. By allowing Dib and Zim the space to grow without forgetting who they are, the film proves ageless in a galaxy plagued by the consumerist nostalgia grab. At its worst, Enter the Florpus, is a hilarious way to spend 71 minutes, and at its best, reminds us that if we just stick to the plot on our search for meaning, we might realize we’re not on this spaceship alone.