The band's Ken Casey and Tim Brennan showed up to cheer on young Quinn, who is battling cancer 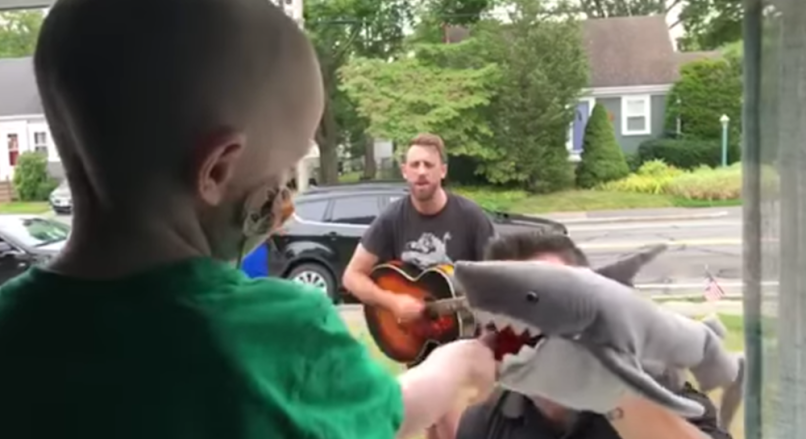 Before hitting the road with Clutch and Hatebreed this fall, Massachusetts punk outfit Dropkick Murphys took some time recently to perform for one very special young fan: Quinn, a three-year-old, Boston-area boy who is battling cancer.

However, it wasn’t just any run-of-the-mill show. Because Quinn is highly susceptible to infections and can’t leave his home, band members Ken Casey and Tim Brennan showed up to play right outside of his window.

The intimate performance included an acoustic rendition of Dropkick Murphys’ “I’m Shipping Up to Boston”. There was also a special “cameo” from the friendliest punk-loving shark.

“A few of the guys were able to sneak over and play some songs for an awesome little fella named Quinn yesterday,” a social media post from the band reads. “Quinn has a wonderful family and they are in our thoughts and prayers during this difficult time.”

Watch the heartwarming clip below.

According to a post on Quinn’s Facebook page (The Mighty Quinn), the performance was arranged by Casey and his charitable organization, the Claddagh Fund. The Fund has been supportive of Quinn ever since learning about his Medulloblastoma diagnosis earlier this year.

“To say we are grateful, again we cannot be more thankful to everyone, but especially today, to Ken Casey and Tim Brennan for taking the time to come see Quinn. Both were so great with Quinn & Maggie…especially Tim, you took the time to tune Maggie’s Guitar even though she can’t play a lick!”

In addition to punk rock shows, other locals have been showing up outside of Quinn’s window to cheer him on. There’s been a dog parade, a fun airplane art installation, and even a huge Nerf gun fight. It’s safe to say that, even during these dark times, there’s still plenty of light and kindness out there in the world.

Find more footage from the Dropkick Murphys appearance below, and catch the full band in action by getting tickets to their upcoming tour here.