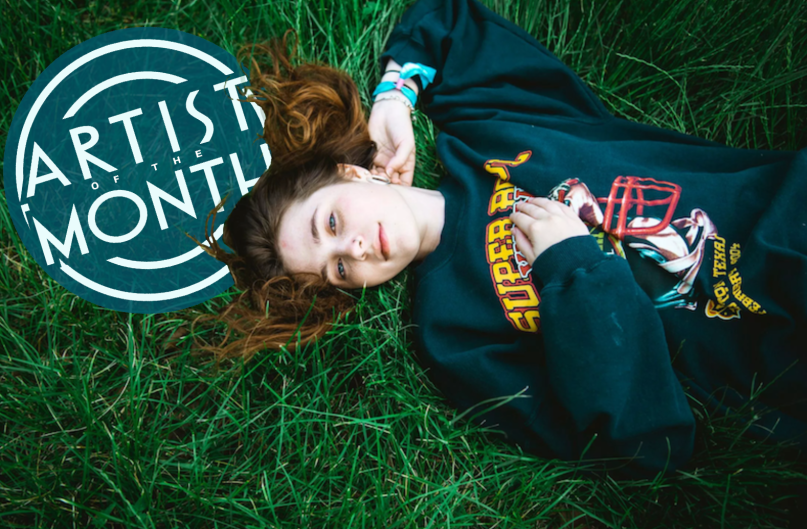 It’s the week after Pitchfork, and like many of America’s hippest twentysomethings, Claire Cottrill’s still basking in the festival’s afterglow. Unlike her peers, our Artist of the Month’s source of warm, post-festival fuzzies didn’t come from surviving Saturday’s weather delay or busting moves to Robyn, but from gazing out into a softball field full of people assembled just for her.

“I’ve been on an arena tour for a minute, but having Pitchfork in the middle was amazing,” said the performer also known as Clairo. “To have a crowd that was there for me, and ginormous, and knew the words to my songs … I’ve never seen a crowd sing along to those early songs like that.”

The key word there is “early.” Clairo’s Sunday appearance at Pitchfork (which earned the “Most Surpising Showmanship” superlative from Chicago Tribune’s Nicole Blackwood, who noted “[Clairo] is someone who knows exactly what she’s doing, and she does it beautifully”) was a curtain call of sorts.

The set represented one of just a handful of performances left before the release of her debut album, Immunity, which adds 11 songs to her already catchy catalog and forever divides her career in worlds of pre- and post-. Thus, the early adopters in attendance in Chicago didn’t just get one of the festival’s buzziest sets; they also got the chance to reflect on how Clairo got here, what she’s already accomplished, and where her shooting-star rise to prominence might take her next.

A quick Clairo catch-up, for the still-uninitiated: Claire Cottrill began making music at the age of 13. Throughout those early days, she wasn’t shy about uploading her works (and works-in-progress) to sites like YouTube and Bandcamp.

“I started using social media as a journal,” she said, “to keep a record of the moment.”

One of those journal entries struck a nerve: “Pretty Girl” went viral in 2017; as I write this, the original YouTube video sits just north of 37 million views. The video’s charms are immediately apparent; shot webcam-style in what appears to be Cottrill’s bedroom, the clip finds her locked in a goofy lip-synch, miming along to her own spare Casio-esque accompaniment while trying on sunglasses, testing out dance moves, and showing off a Gremlins Funko Pop figure. And the song? Well, the song sounded like a cassingle that’s only for sale at a record store accessible by dreams.

People were paying attention now, for both good and ill. Labels including RCA, Columbia, and Capitol soon came calling. Faced with instant (and life-altering) success, Cottrill did what most teenagers would do: talked to her parents. That’s how, as detailed in a 2018 profile by The New York Times, Cottrill met Jon Cohen, the co-founder of The Fader and friend of her father, Geoff. Soon, she signed with Cohen’s Fader Label.

Simple, right? As you can tell by that construction, it was anything but. In the wake of her signing, Cottrill found herself under the microscope of the Internet’s wannabe sleuths, who interpreted her father’s connections to industry players as a form of nepotism. Soon, Reddit was aflame with cries of “industry sellout” and posters questioning whether or not Clairo could legitimately call herself a DIY artist. Many of the arguments were plainly in bad faith and more than a little sexist. As Cottrill told The New York Times:

“The fact that there has to be a man behind my success when I genuinely have worked so hard is frustrating,” she said. “At the end of the day, when people say, ‘Oh, she’s an industry plant,’ I’m like, ‘No, I just have representation, like every single other artist you listen to.’ I’m not the first person to get a manager.”

Beset by viral fame and equally viral backlash, Clairo entered the album-making process with more to worry about than just boosting her streaming numbers or pleasing a record label.

“I wanted to make sure and get the album right,” she said. “It was important that it showcased what I’m capable of, and my ability.”

In addition to an exhaustive writing session (Cottrill estimates that she wrote 30 to 40 songs before nailing down the 11 that now appear on Immunity), that also meant finding the right producer.

Enter Rostam Batmanglij, the ex-Vampire Weekend dynamo whose production credits include tracks for everyone from Carly Rae Jepsen and HAIM to Frank Ocean and Solange. Described by Cottrill as “a legend,” Rostam had toured with her friends in the Philadelphia band Joy Again in 2018, so she knew she might have a potential in. Then, she got a surprise.

“He actually mentioned me in Rolling Stone when they asked what he was listening to,” she said, referring to Batmanglij’s early endorsement of “Flaming Hot Cheetos”. “My parents slammed the copy of Rolling Stone down on the counter and were like ‘YOU’RE IN ROLLING STONE!’ And I was like ‘WAIT, THAT’S ROSTAM!'”

This mutual appreciation society soon met in person, and got to work crafting the album that would become Immunity soon after. Of the collaboration, Cottrill has nothing but good things to say.

“Working with Rostam was a blessing,” she said. “He brought so much experience, but was still so willing to answer questions and let me try things I didn’t really know how to do.”

A week after Immunity’s release, the results of this partnership are finally free to speak for themselves. Across 11 tracks of soft-focus indie pop, Cottrill proves her adeptness at crafting a cohesive collection of songs that still unfolds with the surprises of a mixtape. Whether she’s turning out ’90s-style R&B torch songs (“Sinking”), crunchy buzz bin rock (“North”), or lighter-than-air Italo pop (“Sofia”), Cottrill infuses each with a confident confessionalism that reveals her expressive range as both a singer and lyricist.

Rostam’s production work feels symbiotic in response; from Vampire Weekend-style harpsichord flitting around the edges of kiss-off ballad “Impossible” to the sparse piano that echoes throughout “Alewife” and its story of a failed suicide attempt, his flourishes amplify the material without ever overwhelming it. There are certainly singles here — “Softly” sounds like a 1994 radio hit crossed with a J. Dilla beat played from the next room, and “Bags” could be a lost A-side from Transatlanticism-era Death Cab for Cutie — but Cottrill firmly believes these songs work best as a collective experience.

“These songs can only exist together,” she said. You’ve gotta listen front to back. No song can exist without the other.”

Where Does Social Stand?

If, as Cottrill told me early in our chat, “songs are a time capsule of a moment,” then the songs of Immunity seem to capture a performer in the act of proving their bona fides and stepping towards the edge of even greater things. While it’s not Clairo’s job to rebut the haters and doubters, it’s hard to see how anyone could listen to the record and still come away questioning. Still, I wondered how Cottrill’s relationship with social media had changed between 2017 and now.

“Social is weird,” she said. “I moved quickly from being a consumer to being a producer, and it’s tricky to go from constant posting to figuring out how often to share things, because now people are paying attention. I don’t want to overload the Internet with bullshit.”

It’s still interesting to look back on what I made when no one was paying attention,” she added “and to realize that it isn’t private and that millions of people are seeing it and interpreting it.”

It seems likely that, in the wake of Immunity’s release, Cottrill’s older work will come to the attention of yet another wave of first-time listeners. However, that’s not what was on her mind the day we spoke. Neither was Immunity, really. Even on the eve of her record’s release, Cottrill wasn’t interested in living in even her very recent past.

“Once I release [the album] and it’s out into the world, it isn’t mine anymore,” she said. “I feel like I’ve been listening to it for months, and I’m already kind of sick of it and ready to move on to new stuff.”