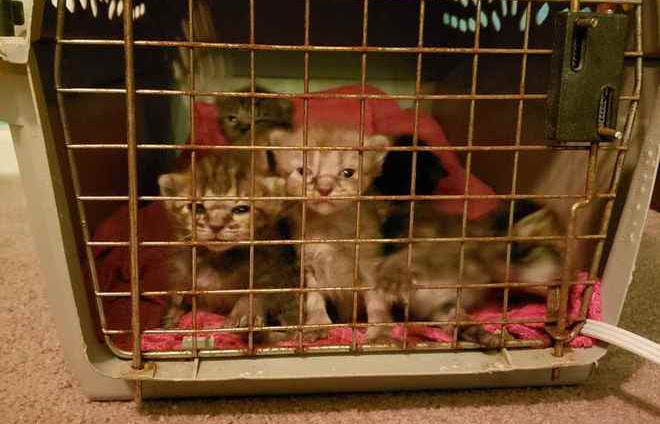 The classic stereotype of the rock-and-roll lifestyle is one of danger, with kids abandoning their parents’ home too young, seduced by the music and life on the road. While that trope has more or less fallen to the wayside, it still lives on in a group of very punk-rock kittens, who stowed away on Sister Hazel’s tour bus last week for an 800-mile trek across the South.

The felines started their journey in Nashville, hidden in the battery compartment of the Gainesville alt-rockers’ tour bus. For two days, the newborn cats were trapped in the front hood of the vehicle, tagging along for the band’s 15-hour journey back to their home state of Florida. Sister Hazel ultimately discovered their unexpected and adorable cargo in Ocala, Florida, where they were delighted to find that the bizarre sounds they’d been hearing were not a faulty air compressor, but instead six very young and very cute kittens.

“One of our crew guys came into the venue last Friday afternoon and told Kurt Pfister, our production manager, he heard a weird noise coming from somewhere in the bus that sounded like cats. Kurt told him we have been having problems with the air compressor and that’s probably what it was. He went out, heard something, shut everything down on the bus, and shockingly heard meowing. The cries were tracked down to the front battery compartment of the bus where it was opened to find SIX kittens.

Kurt then called the bus owner to get some advice about the easiest way to get to three of them that we couldn’t reach. The owner then told him that the mother cat lives in an old abandoned bus on the tour bus company’s parking lot in Nashville, TN, and she had six kittens a couple of weeks ago. So she must have moved them into our bus. Luckily, one of the employees of the venue in Ocala, FL runs an animal rescue, so she took them to get fed and checked out!! They seemed okay, but I can’t imagine how loud and windy it was when the bus was on the road!”

All six cats are available for adoption at Melissa Bell’s Rescue. Happily, the organization noted that they’re in fine health after their harrowing road trip, adding:

“They are really precious and love to eat. We are currently bottle feeding them and likely for another week or so until they can start to drink from a shallow plate. Then we move to wet food around seven weeks, then to kibble after that. They have had their first dose of Strongid, which is a wormer, and they all had baths two nights ago. They don’t need their heating pad anymore since they can now better regulate their body temperature. They are doing really well, and the one black one along with the fluffy brown/tan one are the two loudest!”

The rescue is also accepting monetary contributions, plus food, litter, and formula donations, which can be given here.