R.I.P. Stewart, the corgi who played Cheddar on Brooklyn Nine-Nine, has died 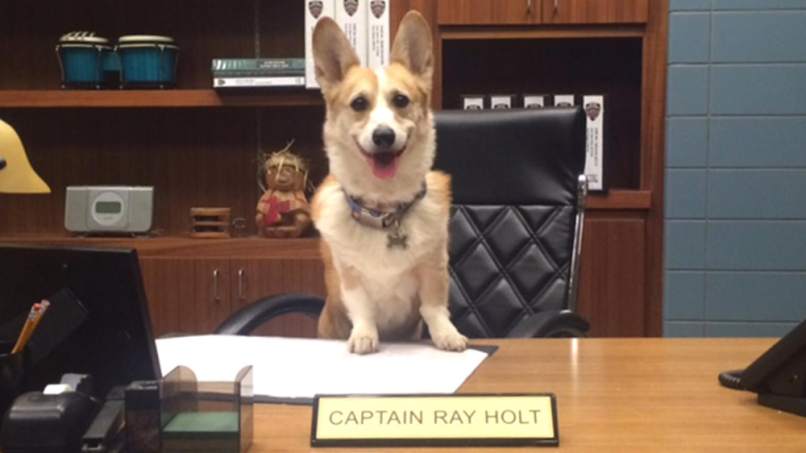 The Brooklyn Nine-Nine team will have a little less bite. Stewart, the adorable corgi who famously played Captain Raymond Holt’s Cheddar, has died. He was 13.

Stewart lived in California with his human pawrents and canine sister. The Pembroke Welsh corgi reportedly passed away “peacefully” and surrounded by loved ones after enjoying a day at the beach, according to his owners,

“We went to the beach (his favorite place) where he frolicked in the surf and then enjoyed a picnic lunch of In & Out burgers. We relaxed in the sun and just enjoyed each other’s company. Our veterinarian met us there later and Stewart went to sleep peacefully in my arms while listening to the sounds of the ocean. He was a one in a million kind of dog, he was my supaah staah.”

As Entertainment Weekly notes, the Cheddar character has been played by a number of dogs, but Stewart’s stint was the longest. More than just a cute pet, Cheddar was known for partaking in police business as a topnotch sidekick to Captain Holt and his squad. In 2016, Brooklyn Nine-Nine even aired a season three episode named after Cheddar.

A replacement pup for Cheddar hasn’t been announced yet.

Below, check out video clips of Cheddar, as well as tweets mourning the passing of one of TV’s goodest bois.

My heart hurts. Stewart, the dog who played Cheddar on Brooklyn Nine-Nine, just passed away yesterday. RIP to the goodest boy there ever was. You were never just some common bitch <3 https://t.co/i4bWzYUGVT pic.twitter.com/jWfuX16xOI

just found out that the dog who played cheddar on b99 died this is the worst day of my life pic.twitter.com/LQMDFpbpu2