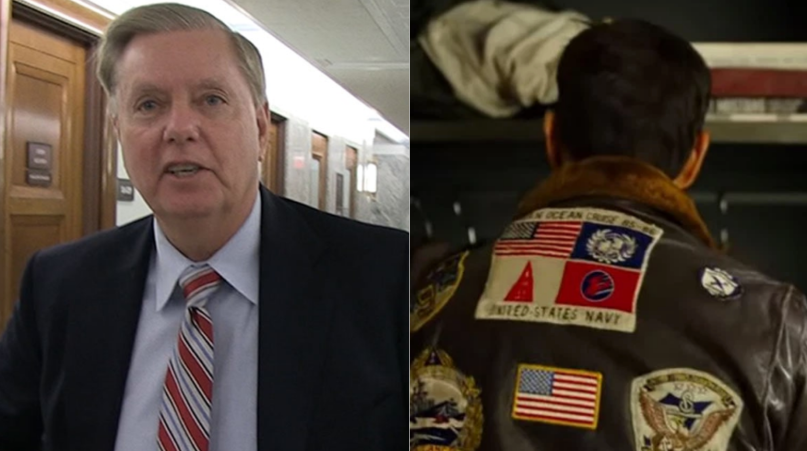 South Carolina Republican Senator Lindsey Graham is not worried about Russia’s meddling in Western democracies. Nor is he concerned about Donald Trump’s flagrant disregard for the Constitution and the rule of law. He doesn’t seem particularly bothered by Trump’s admiration for authoritarian dictators and disdain for longtime allies. He looks the other way when the president attacks the free press, blatantly lies to the American people, throws children in cages, and bans Muslims from entering the United States.

But there is one thing Lindsey Graham will absolutely not stand for: the alteration of Tom Cruise’s jacket in Top Gun.

As we told you yesterday, in the forthcoming sequel Top Gun: Maverick, the jacket worn by Cruise’s character no longer features Japanese and Taiwanese flags. It seems Paramount made the change to ensure a release in the highly lucrative Chinese film market. Basically, a move to maximize profits — or, as we like to call it here in America, capitalism!

TMZ asked Graham his thoughts on the “controversy” and the senator didn’t hold back. “The power of Chinese money in the modern world, it sucks,” Graham remarked. “I hate to see the flags removed because of Chinese financing. It’s a private sector decision, there’s nothing the government can do, but I think it sucks.”

For those keeping score, Graham has now said more on the record about alterations to a jacket worn by a fictional character in a fictional action movie than he has about Trump’s derogatory and racist insults aimed at four Congresswomen of color. #Priorities