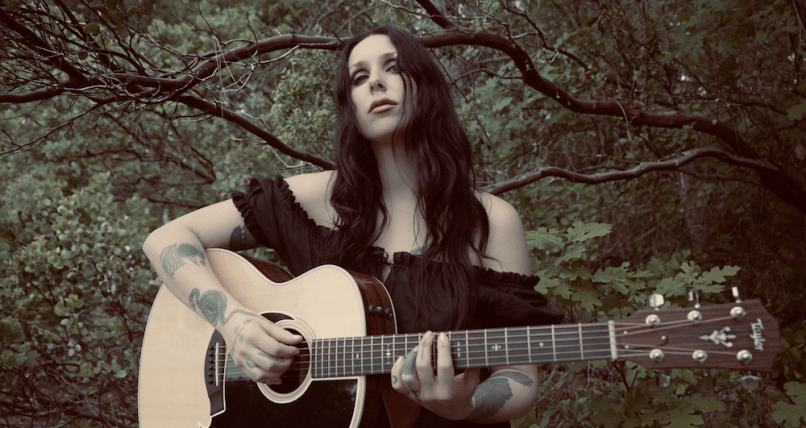 Later this summer, Chelsea Wolfe returns with her sixth album, Birth of Violence. The follow-up to 2015’s Abyss finds the artist revisiting the stripped-down, Gothic folk rock of her earlier records. After teasing with the June single “The Mother Road”, Wolfe pulls back the veil today to show fans “American Darkness”.

According to Wolfe, the slow-burning number is about the “expression of freedom and beautiful humans being themselves.” “Damn my dreams, the tormentors,” she sings on the track. “Last night your mouth was on my skin and the poppies were like fire on the mountain/ i took your hand and led you home.”

A mystical, black-and-white video also accompanies the single. Directed by Karlos Rene Ayala, it originally started as “a sort of homage to a scene in the Paul Thomas Anderson film Magnolia, where the characters are singing along to the Aimee Mann song ‘Wise Up'”. However, it ended up becoming a piece “explored through the lens of The Tarot”, explained Wolfe,

“I’ve been reading tarot cards for myself for many years, and researching the symbolic expressions of the cards for this video made me want to dive even deeper. To represent that, I played both The Fool and The High Priestess cards in the video, to embody both the beginning of the journey, and the realization that the sacred knowledge I was seeking was inside me all along. We cast friends to play a few other tarot archetypes, and Karlos’ idea was to bring the symbols and signifiers into the contemporary; deconstructed, and made everyday – ‘the magical and the unexceptional.’ I loved that. At the same time, we really wanted to challenge the binary of the traditional tarot cards, and give them more diversity, which is something important that many cool artists and witches are doing.”

As mentioned, Wolfe stars in the “American Darkness” clip, which can be watched below.

Birth of Violence hits shelves September 13th through Sargent House. Wolfe will support the LP with an extensive, acoustic North American tour, tickets for which can be purchased here.