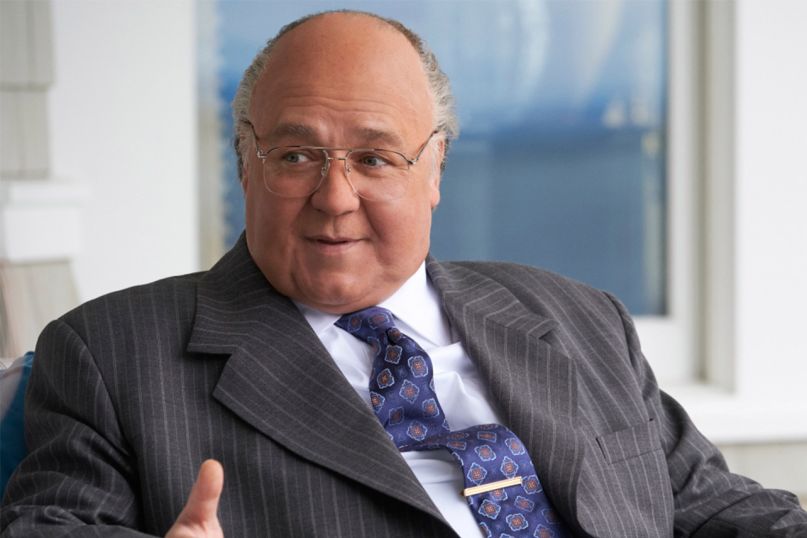 The Pitch: At the beginning of it all, Roger Ailes (Russell Crowe) just wanted to sell people the news they want. It was a simple, chilling principle, and one from which the former CNBC mastermind never strayed. Despite being pushed out of that network in the mid-1990s, Ailes knew that his ideas could alter the course of television news for good. He would sell America “a positive message, an American message, wrapped in a conservative viewpoint,” and with that he would affect the national change that he and other right-wing power players of the era desired most.

Ailes’ vision of a new TV news was simple. The male hosts would be “real guys,” inexperienced but passionate hosts willing to yell their way through a lack of preparation or qualification. The female hosts would show their legs, present appealingly, and willingly kowtow to Ailes’ demands both in front of and behind the camera. And the perspective, as previously mentioned, would be as conservative as possible. It would be a channel for the “forgotten American.”

On October 7th, 1996, Ailes’ vision was realized with the broadcast debut of the Fox News Channel. Less than 25 years later, it would become the epicenter of the broadcast media’s war with news ethics and with its own hunger for ratings. Ailes would live to see his vision take over news media around the nation, and the world. And he would also live just long enough to see his public name undone by his years of harassment and sexual abuse behind the scenes, involving himself and several different women at the network. Ailes built the empire America wanted, and perhaps the one it deserved, and Showtime’s new limited series The Loudest Voice explores the life of the man who wanted to control the world.

Turn Off Your TV: Through the four episodes of The Loudest Voice provided into critics, out of seven in total, the series takes no shortage of pains to illustrate that Roger Ailes was a capital-V Villain, both before and after he became the face of conservative TV news in the United States. The series hardly takes a nuanced approach to Ailes; whether he’s bloviating to Rupert Murdoch (Simon McBurney) about the value of bringing salacious ’90s talk show principles to prime-time television, or putting his hands on prospective female anchors as soon as his office empties out, Ailes is a shark waiting for the means to feast on anything and anybody he wants.

This approach gives Crowe plenty to work with, as the Oscar winner piles on the righteous fury in his portrayal of a man who flew into a rage the second any whim of his was denied. At one point he’s chided by network ownership for demanding that the 44th U.S. president be called “Barack Hussein Obama” when mentioned on-air, and you can practically see the darkness clouding the actor’s eyes as he churns himself into outrage. Crowe’s portrayal is vicious, a vision of a man whose cocksure aura exists at odds with the petulant rage he slides into whenever he’s disobeyed. Like so many power-hungry men, Ailes as depicted here is only as strong as the necks on which he’s standing at any given time. But as he continues to accumulate political clout, eventually ghostwriting talking points for the post-9/11 Bush administration, his menace grows exponentially alongside it. A man like Ailes is beastly enough by his very nature, but when handed the ability to influence and subjugate others, something ghastly is unleashed in him.

While Crowe’s performance is the textbook definition of “showy,” the actor making a five-course meal out of every bellowing rally speech and growling instance of interpersonal menace, he also does excellent work at teasing out the burgeoning evil within an already frightening man. Whenever he’s successfully able to bend somebody else to his will, it’s the only time Crowe allows a smile to creep out. His only joy emerges from dominion over other people, and Crowe imbues his take on Ailes with an ever-snowballing God complex. For the Ailes of The Loudest Voice, and more than likely the late Fox News owner himself, dragging America to his own vision of what it “should be” wasn’t just a moral duty, or even a matter of personal vendetta. It was simply the natural order of things.

The Muted Voices: However, if The Loudest Voice yields a compelling showcase for Crowe in as deeply unempathetic a performance as he’s ever given, the first two-thirds of the series do a great disservice to his victims by comparison. While the series’ approaches to both Ailes and his effects on the future of American news are detailed, far less screen time or forethought is granted to the various women who Ailes victimized while in his position of great power. The series finds ample time for depictions of his lecherous behavior in anchor interviews, his rank misogyny behind the scenes, and dread-inducing soft-focus images of Fox News executive Laurie Luhn (Annabelle Wallis) being walked to a hotel room to deliver on the sexual arrangement that would eventually lead to her massive lawsuit against Ailes and the network. But it doesn’t seem to have nearly as much time for, or interest in, defining Laurie or top-level anchor prospect Gretchen Carlson (Naomi Watts) on their own, in the early going.

While The Loudest Voice is hardly vague about where its sympathies lie, and where its scorn is being assigned, it’s still ultimately a story about and almost entirely following the life and times of Roger Ailes. Even as it condemns him, it’s still fixated on the hateful ideologies that drove his vision and dictated his day-to-day behavior. The series’ early episodes are generally far more concerned with scorning Ailes for his transgressions than it is in exploring his effects on the people who suffered under him, and this approach situates Voice in an uncomfortable position as it progresses. By offering little insight into Laurie beyond her abusive sexual relationship with Ailes, even as it makes time for unsettling and repeated re-enactments of their hotel encounters, The Loudest Voice recounts Ailes’ abuses at length while still privileging his story over those of his victims.

Deprogramming: While the series often underwhelms when it’s time to interrogate its subject beyond a “wow, he was a pretty bad guy, huh?” level of consideration, The Loudest Voice does prove its value in one key respect. At its best, it’s a searing examination of how deliberately Ailes meant to bring white supremacy and bigotry back into the American mainstream from the very beginning, through his version of news reporting. Particularly after 9/11, Ailes’ greatest desire was to incite an international war on the Middle East, and one of his most fundamental beliefs was that people needed to be told exactly who to fear. Without equivocation, without regard for political nuance, it was his job and responsibility to give scared Americans an enemy.

His understanding of the news as a natural tool for propaganda grows more dangerous with each episode, as his credibility continues to rise and his reach expands. Even his side projects cause unspeakable harm; when he and his equally conservative wife Beth (Sienna Miller) decide that their small northern New York town has too great a liberal bias, they simply purchase the town paper and demand that it spread their message. When the years go by and upper Fox News management begins to worry about his loose interpretation of “journalism” as a concept, he simply refuses to field discussions on the topic. To Ailes, journalism wasn’t an institution; it was an industry, and beyond that, a weapon.

The Verdict: Like its protagonist/antagonist/target, The Loudest Voice operates with the subtlety of a hammer to the skull. This is occasionally a virtue, especially when it’s using this approach to capture the growing terror of Ailes’ undisputed rise to power. But in its lacking restraint, the series too frequently approximates Ailes’ sensationalistic instincts as well.

Most of the second episode follows Ailes, and the network, as the September 11th attacks take place and Fox News rushes to establish itself as the defining news network for any truly patriotic viewer. While it’s fact that Ailes demanded the network air footage of people jumping from the Twin Towers as they burned, there’s something highly disqueting about The Loudest Voice replaying that same footage, following a jumper’s plummet from start to finish, for little more than shocking dramatic effect. Too much of the series follows a similar pattern: recount Ailes’ worst sins in harrowing detail, even while condemning his methods all the while.

The Loudest Voice is about a bad man who did bad things, and it makes both of those points in abundance throughout. But it’s also increasingly difficult to shake the feeling that the series’ primary function, unintentional though it may be, is to grant yet another lengthy platform to a man, and to ideals, that have caused and continue to cause widespread harm. It immerses itself in a crucial question without ever actually addressing it in any meaningful way: at what point are we all, by continuing to watch, participants in the whole process?