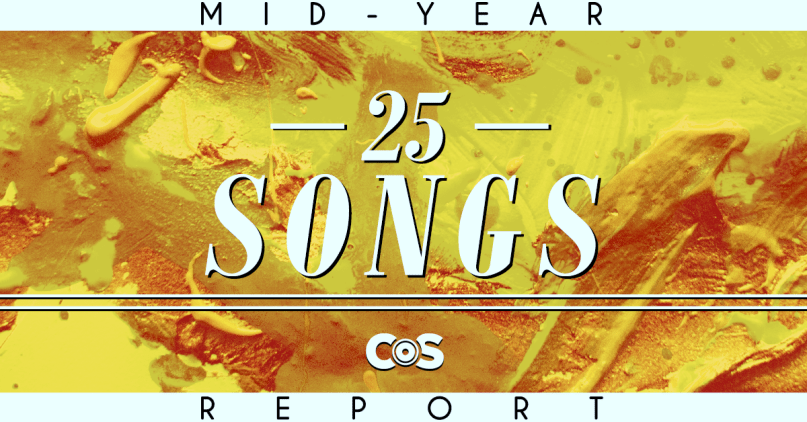 I fall into the same habit year after year. Right around the time we start rounding up contenders for our mid-year reports, I catch myself trying to figure out whether a given year has thus far been an “albums” or a “songs” year. I have no idea if that’s a distinction anyone else makes. The other determination I try to make is whether or not this year’s “anthem” has dropped yet. You know, this year’s “Royals” or “Alright” or “Freedom”, the song that’ll transcend barriers, break through demographics, and be on everyone’s lips and stuck in everyone’s heads until 2019 fades … and maybe longer. Then again, if you have to ask, it hasn’t happened yet, right?

Where am I at so far in 2019? More or less stuck. The albums I love most so far are packed with the songs I love most. That doesn’t always happen. Usually, more diamonds fall from rougher places. This year, they seem mostly clumped together. Does that make it an “albums year?” Maybe, but I’m not sure. For instance, I can’t necessarily tell you if Sharon Van Etten’s “Seventeen” is a better song than her Remind Me Tomorrow is an album. Again, maybe we’re not supposed to think this way.

But putting my idiosyncrasies aside, I do know that there isn’t a song on this list that doesn’t do something for me. Whether it’s a twerking session with Lizzo, a history lesson with Jamila Woods, or a heartbroken late-night drive with Tyler, the Creator, I never find myself pressing <skip>. And that tells me all I really need to know. Now, press <play>.

Head to Consequence of Sound Radio on TuneIn to listen to all our favorite music released this year!

I Am Easy to Find

Sounds Like: Love echoing in the insurmountable distance between two people

Key Lyric: “Everyone was lighting up in the shadows alone/ You could’ve been right there next to me, and I’d have never known”

Why It Matters: The National can break a heart like nobody’s business. As soon as Aaron Dessner’s fingers tumble over the keys on this closing track to I Am Easy to Find, the cracks start to form. Then in comes Matt Berninger, his voice an even more restrained hush than usual, and it’s like the organ just falls apart in your chest. There’s something so simple about the phrase “I will always be light years away from you” that almost feels like it’s not cerebral enough for a National cut, but it’s composed with such grace that it will make you cry like the best of their repertoire. –Ben Kaye

Key Lyric: “Ricky used to take me to my first shows ever/ Would only drop jewels way before they dropped cheddar”

Why It Matters: With a playful beat that slaps almost obnoxiously hard and with earnest sincerity in the lyrics, “Ricky” is the type of dichotomous rap track that would confuse the bow tie off a Fox News host. It feels grimy, the kind of dirty, noisy production that would make Laura Ingraham’s brows furrow in disgust. Though Denzel Curry practically bites through the lyrics, their homage to the advice and support of his parents make them actually rather sweet. Sure, the idea of your mom telling you to “use a rubber” is a bit shuddery, but the sentiment is profound. –Ben Kaye

Sounds Like: Looking out the window as your plane floats through a massive and hazy marshmallow cloud

Key Lyric: “Watch the fan as it spins/ In my arms, wrapped in/ Don’t know where you stop/ And where I begin”

Why It Matters: I don’t know what it’s like being a part of the “Mile High Club,” but James Blake, Travis Scott, and producer Metro Boomin sell the membership exceptionally well. The Assume Form single can be listened to with feet firmly planted on the ground, or thousands of feet above sea level, but the result is the same. You’re instantly transported to a place where slow-burning trap never sounded so sweet and yet so sad, where Blake channels Scott’s swagger and Scott manages to borrow a page from Blake’s sensitive choirboy handbook. –Lake Schatz

Sounds Like: The song playing in your head as you dramatically peer out of a car window in your 10-gallon hat, pretending to be in a movie or music video

Key Lyric: “Had enough of heartbreak and pain/ I had a little sweet spot for the rain/ For the rain and skies of gray/ Hello sunshine, won’t you stay?”

Why It Matters: There’s a comfort in being sad, but Bruce Springsteen is ready to break free. “Hello Sunshine” introduces us to The Boss as we’ve rarely seen him: reaching out to embrace contentedness in life and in music. A warm, pedal steel-drenched exercise in country folk’s supreme mellow, the nostalgic lead single off Springsteen’s first album in five years is a watershed moment driven by his richest song in over a decade. There are sunny days ahead for all of us if we choose to move out from underneath the rain cloud. –Irene Monokandilos

Key Lyric: “Took my life for granted till I saw myself in pixels/ All alone and lost for words, so take a thousand pictures”

Why It Matters: Jagged bass and an absurdly beguiling explosion into the hook make “Neon Me Out” as addicting as the technological dependency it’s about. That’s the neat trick of the whole thing, as Sego make it feel somewhat ‘Gramable while simultaneously wrestling with the very concept. Even when it gets a little on-the-nose on the bridge, the criticism that is the song’s conceit feels well considered, cogent, and catchy as hell. It’s all the sort of puckish charm that’s made Sego a band to watch this year, ignoring modish rock norms while taking faddism to task. –Ben Kaye