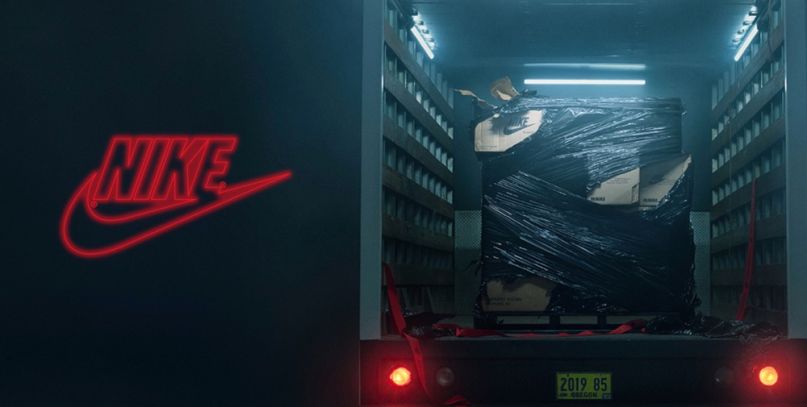 Nike and Stranger Things are teaming up to release limited-edition branded gear ahead of the third season. They even devised a clever backstory to the forthcoming goods that should prompt fans to reach for their wallets.

In the summer of 1985, several transport vehicles departed from Nike HQ in Beaverton, Oregon, carrying special product shipments headed to multiple locations across the US. Unfortunately, a few of the shipments never made it to their destination.

These vehicles all had one thing in common…they were last seen on surveillance footage passing through Hawkins, Indiana. Nike, concerned and confused, never mentioned these missing shipments to anyone for fear that something supernatural was at play.

Their contents are what we now know as iconic Nike styles: the Cortez, Blazer, and Air Tailwind ‘79

The shoes are modeled off their classic 1985 designs. The difference is that they’re all imprinted with Stranger Things logos. As the official site promises, each shoe comes with original-inspired Nike packaging and special edition pins.

So, what’s available? On June 27th, Nike will release the “Hawkins High” collection. That includes the Nike High Blazer Mid, the High Air Tailwind 79, and the High Cortez. It should be noted that series MVP Steve Harrington wore the High Cortez.

The “OG Collection” will follow a week later on July 1st. That one includes a variation on Blazer Mid, the Air Tailwind 79, and the Cortez. In addition to shoes, fans can also pick up a t-shirt, a hat, and a hooded sweatshirt with Hawkins iconography.

The Nike deal is just one of a dozen branding partnerships with Netflix. Look around and you’ll see Stranger Things taking over Target, Coca-Cola, Baskin Robbins, Eggo’s, and even your local Major League baseball teams. It really is the event of the summer.

If we’re to believe Finn Wolfhard, the hype is all too real. In a recent interview with Empire, the Calpurnia singer teased, “Season three is everything, like the fun of season one and the horror of season two and the Duffers have got better at writing it. And we’ve become better actors.”

We’ll see when the fireworks go off on July 4th. In the meantime, revisit the epic Season Three trailer below. You can also read our entire breakdown for essential clues.