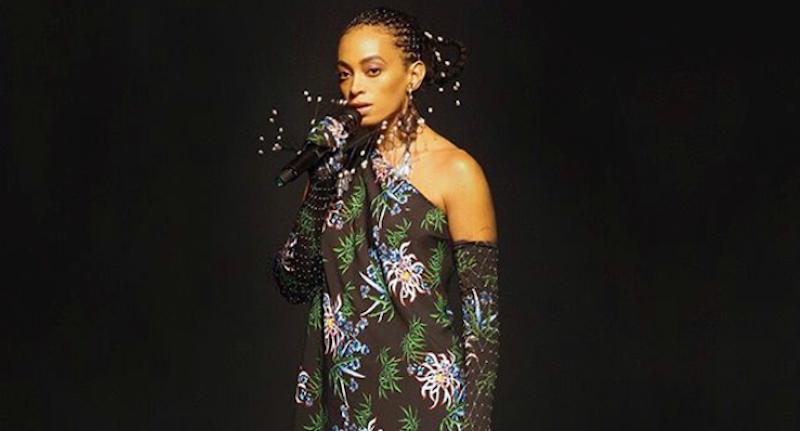 According to ABC News, the show paid homage to the Ama, a dying Japanese community of aging women who free-dive into the sea well into their 70s. “For over 2000 years (they) have dived to the ocean floor to forage for seafood such as shrimp, urchins or even pearls,” said one of the featured designers Humberto Leon. “They have become known as the last mermaids.”

Solange’s score throughout was minimal, yet still striking in its own subtle way. To the take the stage for her performance, she walked down the runway alongside models and her band, per Dazed,

“Then, the womenswear segment began, with models emerging wearing all the inches, with floor-skimming extensions. Part-mermaid, part-diver, the models looked as if they’d emerged from the sea with tiny pearls all over their clothes and accessories – even their nails. Solange and the band came down to the runway, with the singer conducting them as the models sashayed past.”

Adorned with futuristic jewelry, Solange then launched into a brass-heavy performance of “I’m a Witness”, taken from her stellar 2019 album, When I Get Home.

Check out video clips and photos from the event below.

KENZO SS20 Farewell show for @carollim and @humberto 3,000 guests!!!! Well done to the @backofthehouse team! It was a pleasure working with you! #kenzo #pfw #ss20 #fashion #bts #models #runway #finale

Since the release of When I Get Home, Solange has contributed to Tyler, the Creator’s IGOR and Flying Lotus’ Flamagra, as well as appeared in sister Beyoncé’s Netflix documentary Homecoming.