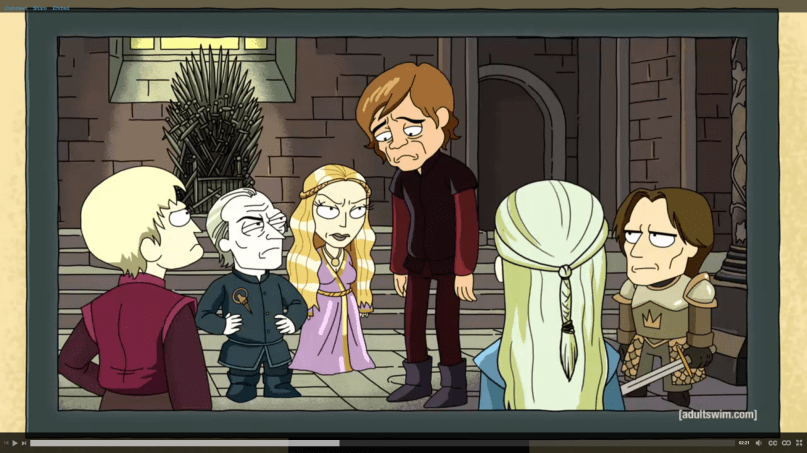 Not everyone hated the ending to HBO’s Game of Thrones. Rick and Morty creators Dan Harmon and Justin Roiland are pleased with how the series ended. Enough that they’ve come to the show’s defense in a new interview with Entertainment Weekly.

“I was afraid to watch it for a while because I didn’t want it to end,” Harmon admitted. “I wanted to keep this soap opera in my life. But I knew it had to end, and I was as satisfied as I possibly could be watching a staple in my life wrap up and all of the characters taking each other out.”

He continued, “As a showrunner, I was amazed at the amount they were able to accomplish — especially given the meta-reality of having run out of books to adapt. Watching The Hound fight The Mountain on the stairs, I was like, ‘This is all great, man.’”

Harmon said he was “aware of the disappointment factor with [Daenerys Targaryen’s] dark turn,” but leaned on the fans. “I’m not going to say fans are too cynical and ungrateful, but I guess I did just say that.” Rest assured, he knows a thing or two about toxic fandom.

“I echo all of Dan’s sentiments about the show,” Roiland followed. “Structurally, I think it was great. I just selfishly wanted more episodes. I wanted to get to those plot points at a slower pace. I didn’t want it to end either. I wished it was stepped out over three more seasons, or three of four more episodes.”

Roiland stressed, “There’s not going to be another show that big. I shouldn’t say that because there’s always something potentially looming around the corner. But that show was a phenomenon. It was insanely big. Everybody was watching it.”

It should be noted that Game of Thrones showrunners D.B. Weiss and David Benioff are conversely big fans of Rick and Morty. The two even provided a DVD audio commentary track for the show’s breakthrough episode, “Pickle Rick.”

That relationship stands as Roiland added, “I love [them], they’re fucking awesome guys.”

Rick and Morty returns to Adult Swim in November. Meanwhile, the finale to Game of Thrones has been submitted for Emmy consideration.