The figures are modeled after the band's "Cowboys From Hell" look 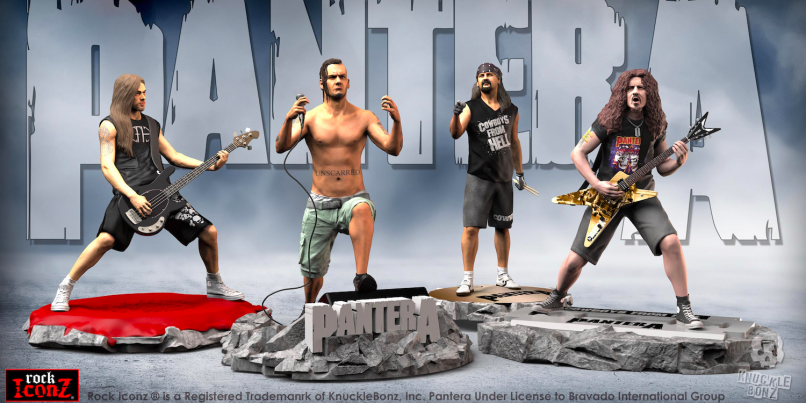 Pantera are already metal gods in the minds of headbangers worldwide, but this fall they’ll be immortalized with a set of “Cowboys From Hell” collectible statues by KnuckleBonz.

At 8.5″ tall, the figures will command some space on the shelf next to your copies of Cowboys from Hell andVulgar Display of Power. Fans can own the full band of Phil Anselmo, Dimebag Darrell, Rex Brown, and Vinnie Paul for $499.99, or snag their favorite member of Pantera individually for $149 apiece. Each statue is limited to a run of 3,000.

Designed by KnuckleBonz, the set is apart of the company’s Rock Iconz series, which is known for its intricately detailed sculptures, right down to the tattoos and guitar inlays. Crafted by a “team of highly skilled artists,” each statue is “sculpted and cast in poly-resin and then hand-painted in fine detail.”

Pantera played their last show in August 2001, and went on indefinite hiatus after inner turmoil and Anselmo’s substance abuse tore the band apart. Dimebag was tragically slain onstage by a deranged concertgoer while performing with his band Damageplan in 2004, and Vinnie Paul died last year as the result of heart disease.