She also sings Metallica, Led Zeppelin, and Amy Winehouse, and brings out Lil Nas X and her dad for "Old Town Road". 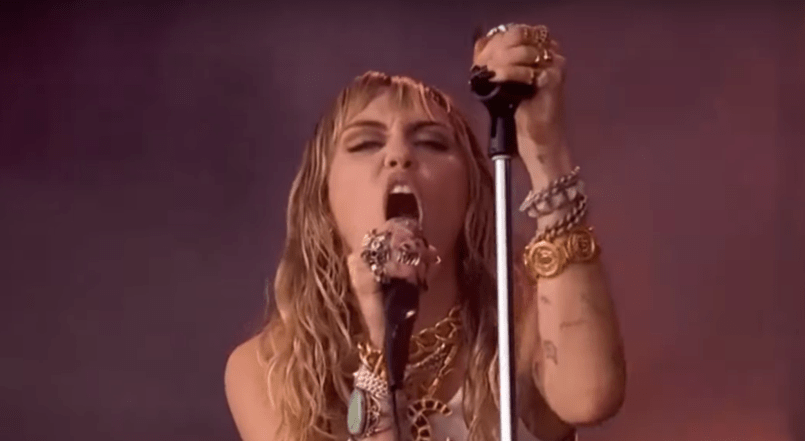 Miley Cyrus pulled out all the stops for her debut appearance at Glastonbury.

The pop singer’s 16-song set was littered with unexpected covers and surprise guests. She and Mark Ronson opened the show with “Nothing Breaks Like a Heart” featuring a brief cover of Amy Winehouse’s “Back in Black”. Subsequent renditions of “Mother’s Daughter” and “Unholy” incorporated elements of Led Zeppelin’s “Black Dog” and Metallica’s “Nothing Else Matters”, respectively.

Most notably, however, Cyrus followed up the live debut of “On A Roll”, her Black Mirror Nine Inch Nails remake, by covering Trent Reznor’s original composition in full.

In addition to Ronson, Cyrus was joined on stage by Lil Nas X and her father Billy Ray Cyrus for a performance of their viral smash “Old Town Road”.

Watch footage of Cyrus’ Glastonbury set and see the full setlist below.

Is this the first time someone from Black Mirror has played @GlastoFest?

(@MileyCyrus came back on after to cover @nineinchnails’ Head Like A Hole 🤟) pic.twitter.com/YeTGVx01iS

R.I.P. Amy 😢 @MileyCyrus and @MarkRonson doing a cover of ‘Back To Black’ at Glastonbury. pic.twitter.com/97hU4nxIgt