"Seeing the response [to the new album] live, it's a whole other level" 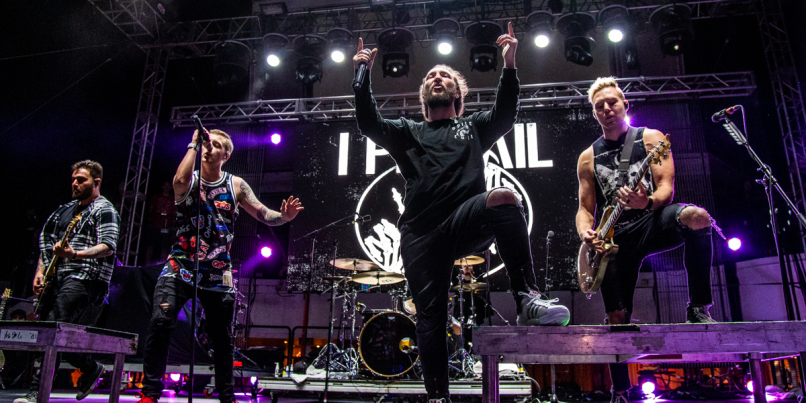 I Prevail at ShipRocked 2019, photo by Amy Harris

Detroit-area rockers I Prevail achieved great success with their 2016 full-length debut, Lifelines, and it looks like that momentum has carried over to their new album, Trauma, which arrived in March.

Avoiding the sophomore slump, I Prevail, well, prevailed, churning out a high-octane set of tracks on Trauma, which earned the band a Top 15 showing on the Billboard 200 chart.

Thematically, Trauma is a painfully honest collection of songs that comes from a very real place. Vocalist Brian Burkheiser took time away from the band before recording the album to undergo throat surgery, which was scary both physically and mentally. The album also deals with emotional issues that are all too common in young people’s lives, such as anxiety and depression.

With the band set to kick off the a new North American leg of “The Trauma Tour” in mid July, I Prevail guitarist Steve Menoian spoke with Heavy Consequence about the honest themes surrounding Trauma, why he’s so proud of Burkheiser’s triumphant return to the band, their now-famous Taylor Swift cover, and more. Read the full interview below.

On fans’ response to I Prevail’s new album Trauma

It’s been amazing. It just honestly feels like there’s a different energy in the room with these songs, for whatever reason. The kids are singing back in a different way than they did even on Lifelines. After locking yourself away in isolation in the studio for so long, you kind of start to lose your mind and question everything and wonder, “Is this any good?” So, then putting it out there and getting the response we did, and then seeing the response live, it’s a whole other level. So, it’s been an amazing couple of months so far.

On the single, “Paranoid”, and the genesis of the song

That song was such an interesting journey. We had combined different songs and different choruses, and Brian [Burkheiser] and I wrote what became the verse of that song, which was centered around a lot of his battles and our battles with a lot of mental stuff we were going through and the challenges that come with that side of it. The instrumental we had built around it had this dark, kind of creepy vibe to it, and it’s almost like took on this playful darkness to it, which we really leaned into.

“Paranoid” became this really serious, introspective song, and it also had this playful side to it, which we just let happen naturally. We got really weird with the instrumental and the arrangement of it, and we ended up doing a drop in a rock context, which we thought was a really cool idea that fit the weird vibe. And, it’s only 2 minutes and 23 seconds, so we didn’t do a typical bridge and typical third chorus. We basically threw all the rules out the window and leaned into all the weirdness of it. Releasing “Paranoid,” we felt, told people to get ready for a record that you wouldn’t expect.

Oh, very heavily. I’d say it was the biggest influence. Brian has dealt with it a lot, and so has Eric [Vanlerberghe]. We all have had our experiences with it, as well. With Brian and Eric being on the front end, they’re the ones saying the words, and every night, we really try to filter through their experiences as much as feels natural. Our music has always kind of had undertones of positivity. Sometimes, you need to be told it’s going to be okay. That’s how our first two records were — they had a lot of ultimately positive messages.

With this record, we took the position of, “You don’t need to be told it’s going be okay.” Sometimes you just need somebody to tell you that they hear you or are there with you. So, that was more of the message of this record — that sometimes everything isn’t going to be okay. Sometimes you just want someone to know what you’re going through or say, “I hear you. I know exactly what you mean.” That’s what felt natural for us right at this time.

We toured with him and We Came As Romans in the fall of 2017, and it was such an honor to have them support our band. We all grew up in the Detroit area, too. We got to know Kyle pretty well. I personally didn’t, but definitely for the other guys in the band, and every time I met him, he was like super nice and just an incredibly sweet guy. He had this real, crazy positive energy in the way he approached things.

Anytime stuff like that happens within the heavy music community, it’s something that hits close to home and makes you question and rethink a lot of things. It influences you in a weird way. Even with Chester Bennington or Chris Cornell passing away — all of that stuff. We were out on Warped Tour when we got the news about Chester, and it hit everybody in the scene. We almost couldn’t believe it. It makes you wonder if there’s something with this lifestyle of something that is causing this, and it’s the lifestyle you’re trying to live, so it definitely carried an impact. I’m sure that there’s some way that it impacted our headspace for writing the new record.

On Chester Bennington’s influence on the music world

It’s almost like you become numb to how influential they were, just because they were so big. With Linkin Park, it was so mainstream, but then you have that moment when you realize how groundbreaking they were. When we were on the Warped Tour and the news came out that he passed away, every single band was pouring their hearts out onstage, talking about how influential Linkin Park and Chester Bennington were to their music. It’s one of those things that just gives you some perspective.

On how Brian Burkheiser forged ahead following his vocal surgery

He’s doing amazing. I’m really proud of him, and the rest of the guys in the band are so proud of him for the way he pulled himself up. Getting an injury like that and the mental stuff that came with it — he dealt with that and came out as a better singer. He looked for months for the right vocal coach and finally found him, and he found a great guy and instructor to build the best technique for his vocals and the right lifestyle. It’s pretty insane the level he went to in order to hone his craft. I’m personally really proud of him for the way he came out of it, because it would’ve been really easy to go the other way.

We were definitely worried if Brian would be able to physically sing the same way that he did and also mentally be as strong as he needed to be to go through all the things that come with this lifestyle. He just did an amazing job of getting both his voice and his headspace to a great spot. He sounds better than ever now. He has so much extra power to his voice now, and you can just tell that he has this new control, and he gets to show it off a bit more.

It’s funny, because that cover was — I don’t want to say as a total afterthought, because we always knew we were going to do a cover like that, but it wasn’t the main thing. We had worked as a band for probably a year just totally underground, writing and producing, and when we had all of this stuff recorded and done, we were like, “Should we put out a cover?” We knew we wanted to, and we had seen what it did for other bands when it went right, so we genuinely liked the idea of doing a pop-goes-punk kind of song. So, we did it.

On the perfect timing of I Prevail’s “Blank Space” cover

“Blank Space” hadn’t even been put out as a single yet. Her video for the song wasn’t even out yet! I think we got our little video up either a day or two before or after she put up her official video. So, there was a little bit of planning, but like so many things, it just had to catch at the right time for it to become the crazy thing that it did. I remember being like, “Is this really happening?” It just happened so fast, and we were on the road and suddenly touring around the country, and we really had no idea what happened. And then we were on a label and had managers and all that stuff, so we were like, “This is a real thing.”

To me, I always knew this was real and not just from the cover, because our other songs were doing so well from the start. When we were actually playing shows, the kids were singing all the songs, and the movement and energy for our original songs was more intense than even for the covers. So, from somebody like seeing it from the inside, I was never worried about it. But trying to overcome that perception from people on the outside or the industry, our next record sold something like 600,000 copies worldwide, which didn’t have a single cover on it, so that pretty much did it.

Our thanks to Steve Menoian for taking the time to speak with us. Pick up the band’s new album, Trauma, at this location, and see their full tour itinerary here.