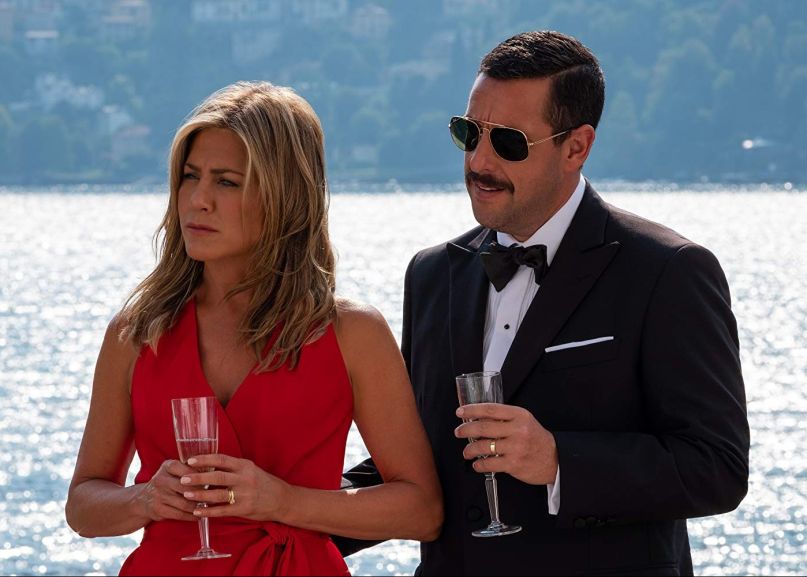 The Pitch:  Think Romancing the Stone meets Murder on the Orient Express, but thinned out, less plucky, and sporting two ‘90s mainstays as the leads. Meet Nick (Adam Sandler) and Audrey Spitz (Jennifer Aniston), a working-class New York couple that gets more than they bargained for during a romantic Eurotrip. Nick’s a struggling cop, embarrassed to admit to Audrey that he’s failed his detective’s exam yet again. Audrey’s a hairdresser, feeling maligned by Nick, constantly daydreaming of a more exciting life through her affinity for Agatha Christie novels. How convenient.

The Spitzes are more-or-less wooed by viscount Charles Cavendish (Luke Evans). The fancy aristocratic type invites the unassuming couple to a yacht party featuring all sorts of characters straight out of a Clue board. Gemma Arterton is Grace Ballard, the actress. John Kani is Colonel Must … err, Ulenga. There’s a maharajah, a race car driver, a scorned mistress, a French detective, and a petty son.  And of course, a crotchety billionaire with a will, surrounded by people with dollar-sign eyes. That’s Malcolm (Terence Stamp), by the way.

Sand-bagging: Dammit, Adam Sandler. You were doing so well for a minute there.

Sandy Wexler was a nice little mid-career love letter. The Meyerowitz Stories was a treat. The Week Of was better than expected. And that stand-up special from last year was a later-career high note for the comedian. But this? Director Kyle Newachek and writer James Vanderbilt’s Murder Mystery? Party like it’s 2005, we suppose. This thing could’ve made $150 million (domestic) a decade ago. But we don’t have the time or patience for a slacking Sand-man anymore. Murder Mystery is ostensibly a truncated SNL sketch. Wouldn’t it be hilarious if an average couple waltzed into an upper-crust scheme? You’d think so.

Is Murder Mystery amusing? Not often. Is it intriguing? Not particularly. Is this another commercially-driven Sandler rom-com with no heart, no soul, lots of branded cross-promotion, and airless plotting that was years in the making until Netflix pulled the trigger by way of their Sandler deal, unconcerned with things like editorial oversight or creative input, rushed out as a means to maintain interest in the Sandler product until the next project comes out in six months? Yes.

The rest of the movie doesn’t even have the courage to get weird, or shocking, at any point. And that’s something when countless bodies are piling up in Italy and Monaco. The script deals in homage, to be certain; in the Christie vein, the characters are designed to be alluring, intriguing, and constantly fishy. The Spritz couple is listless, but even when portraying a tired couple, the joke wears thin when Sandler and Aniston scamper from scene to scene with disingenuity aplenty. They’re neither likable nor all that funny. They’re just pawns baffled by things happening around them, occasionally and angrily trying to solve the case.

The parade of suspects are similarly dull. Stamp’s been playing eccentric kooks for decades now, let him try something else. David Walliams, of Little Britain fame, is Tobias, the sad son of Stamp’s billionaire, and he plays things straight. Walliams was the king of wig parties on the BBC, but misued here as he plays against his strengths. The wonderful Arterton is wasted on a stuck-up archetype. Adeel Akhtar, as the aforementioned maharajah Vikram, is tasked with delivering off-brand Ali G gags. And Evans seems to drift in and out of the film without any memorable scenes. A sneer here. A pout there. Perhaps Netflix got a deal on him for weekend shooting, because he doesn’t even look like he’s having fun.

To pull off a film like this in 2019, you either need a killer lineup of suspects, or to go all-in on the plotted intrigue. Murder Mystery refuses to commit to either. But there is a dumb car chase set to AC/DC near the film’s end. That’s a new one for the genre.

Ad Money: The whole “Sandler as company shill” problem has been observed to death. We get it, he likes vacations and Anheuser-Busch kickbacks, at his laziest. But still, that’s another knock against Murder Mystery’s crappier qualities. Just take note of the following companies and brands mentioned by name throughout: Monster Energy. Flamin’ Hot Cheetos. Allegra. Amazon gift cards. Marshall’s. Target. Claritin.

Some of these lead to jokes. Others are mere conversation topics. And sometimes they just get a nice insert shot. Mr. Sandler, the check’s in the mail. Enjoy the new gazebo.

The Verdict: 97 minutes may not be a lot of time, but even by the standards of Netflix’s grabs for the half-attention of phone-reading viewers, Murder Mystery has little to boast about. It’s not even worth even a passing glance. Netflix wants viewership numbers, and this doesn’t warrant them. Murder Mystery is a dud, stained with slack humor and a total unwillingness to play within its own chosen genre.