TV Review: Of Mics and Men Canonizes the Legend of the Wu-Tang Clan

The tensions of sustained brotherhood echo through the entire Showtime series 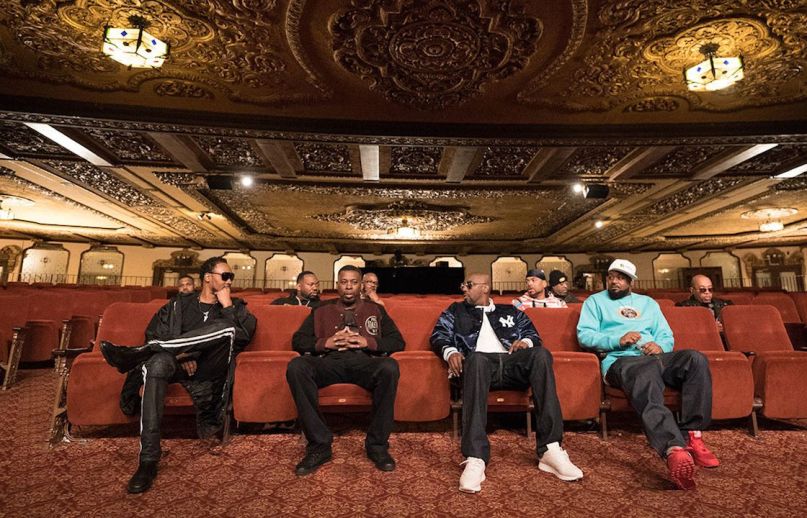 (Editor’s note: The following review covers all four episodes of Wu-Tang Clan: Of Mics and Men.)

The Pitch: When you hear the story, it sounds like divine intervention. Eight rappers from Staten Island and beyond came together in the early 1990s, unified by the vision of an upstart producer. They weren’t signed, but they were talented on a raw level that would draw immediate notice. By late 1993, the Wu-Tang Clan became an immediate household name with the release of Enter the Wu-Tang (36 Chambers), and in the following years they’d spawn a rap dynasty, a litany of hit solo careers, a clothing line, and the expansion of abrasive, true-to-life hip-hop into the American (and then global) mainstream. The Showtime documentary miniseries Wu-Tang Clan: Of Mics and Men tells the story of perhaps the most influential crew in the history of the genre, in the words of RZA, GZA, Raekwon, Ghostface Killah, Method Man, Inspectah Deck, U-God, Masta Killa, Cappadonna, and the Ol’ Dirty Bastard.

Nothin’ To Fuck With: Over the course of its four hours, Of Mics and Men reveals itself as a more pragmatic type of celebration of musical genius. After all, it’s not often a series like this, following an act’s genesis from upbringing to the highs and the following lows, features this degree of candor from its participants. That’s doubly true of an act like the Wu, who’re still touring in both solo and group forms to this day. There’s often a certain degree of inhibition involved in such projects, a sense that the brand has to be protected even when the public already knows much of the story.

What’s immediately arresting about Of Mics and Men is the way in which the group (and the series) treats every step of their rise, and the subsequent fight to stay risen, as an endless series of arguments, squabbles, and necessary time spent apart. The dynamic of the Wu-Tang Clan, as evidenced here, is one of a family, albeit a family who’ve occasionally engaged in public feuds over the years. Early on, it’s acknowledged that “the only time we basically see each other is at the studio or at shows”, but that’s not the ominous declaration it might be in another series, for another act. For the nine surviving members, the maintenance and protection of their place in rap history is its own worthwhile effort, no matter how the players involved might have felt or feel about each other at various points in time.

Members break into arguments, whether in grainy VCR footage from 1997 or in the movie theater where the full-group interviews are being shot. Past feuds are recalled, without bitterness but with an insistence on leaving the historical record as accurate as possible. At large, Of Mics and Men carries an air of catharsis as it goes along; it’s the story of an assumed family, forged through a rapid ascent as a unit that splintered off in unpredictable ways for years, who can still come together when it matters. To this day, as the series’ final episode notes, there are still intra-group issues, and there are still full-group shows being played together. That’s just how family is sometimes.

Grew Up On the Crime Side: Wu-Tang’s chief connection to martial arts movies has always been the constant atmosphere of danger, often from childhood, in which the warriors of such movies were forged. Of Mics and Men explores their version of Staten Island, and New York City in a larger sense, as a place where “it was a nightmare, but at the same time, it was home”. The documentary is framed against violence both specific and broad; members recall running from the thrown glass bottles of local racists at the age of 9, and that specter of endangerment follows them through their careers. RZA briefly did time while the crew was coming together; late in his life, ODB was incarcerated due to an obscure New York law about prior felons wearing body armor. An archival video illustrates how as soon as the group began to build even a little buzz around itself, police began to circle around them more than ever before.

The aggression of Wu-Tang’s music has always been informed by this duality, the sense of making sure one’s always ready for war, since it’s inevitable and just around the corner. Of Mics and Men does excellent work with emphasizing the tone of the environment that shaped them, director Sacha Jenkins bolstering these sequences with a surprisingly deep archive of handheld camcorder footage from their early days, chronicling disputes and brainstorms and shared outrage at their mutual circumstances. They never stopped fighting, and haven’t to this day. As the documentary argues, this might be the thing that’s held them together.

Shimmy Shimmy Ya: As mentioned, Of Mics and Men is the oral history of all ten Wu-Tang Clan members, and that includes the departed Ol’ Dirty Bastard, a.k.a. Russell Jones. Jones remains a key presence in the documentary through his recordings; wisely, Jenkins steps back and allows ODB to tell his own story whenever possible. With the help of Jones’ family, archival recordings of Jones’ own musings, and the accounts of the other members, ODB is resurrected in a way moving beyond holograms or onstage family re-enactments (Jones’ son now occasionally performs with the Clan).

Jones was at once the group’s most visible breakout star (for all of Method Man’s records sold, it’s hard to dispute this, especially circa 1995-96), and its most fundamentally misunderstood member. As several terse label executives point out, there was a gap between the rambling lyrical/sonic brilliance of Jones, and the wider audience’s appreciation of him as a zany outsider. (The phrase “clandestine liberal racism” comes up at one point.) Wu-Tang Clan got where it did in large part by being itself, from the jump, and Jones was the tone-setter for the entire collective.

As such, when the series gets to its third episode, all Wu-Tang Forever heralding the beginning of creative and personal declines alike, it’s the struggle and eventual breakdown of Jones that feels like the truest killing blow for the group’s prime. ODB was ODB, as every member points out, and he was loved fiercely for it. Once he was gone, things were never the same. They couldn’t be.

The Verdict: Over four hours, Of Mics and Men shifts its identity a few times, which makes eminent sense given the fluctuating careers of its subjects. It’s about a New York imperiled then and now by the blight of poverty, about a rap crew who knew they were going to be stars before a song had ever been put to tape, about the ways in which brotherhood remains indomitable even as money and hangers-on and hurt feelings start coming into play as the years go on. Like any marriage, the Wu-Tang Clan has involved a lot of work, a lot of strife, and even the occasional bit of disloyalty. It’s held together for so long because of what it means to those who started it, even now, even after everything.

That doesn’t necessarily mean that it’s all love, even now; one of the film’s best talking head interviews comes late, when the discussion of the controversial Once Upon a Time in Shaolin comes up. The record, produced by RZA and an affiliate without the larger group’s awareness (until it was done, anyway), is still clearly a sore point. Sitting together in a vintage theatre, the members finally get to let loose about how they don’t see it as a “real” Wu-Tang record, and about how they felt like shady business had been conducted, while RZA has to sit there in the front row, being dunked on by his ostensible brothers.

But even a bad “spark of inspiration” and Martin Shkreli can’t keep the Wu apart forever. It won’t. Of Mics and Men offers a thoughtful assessment of a musical act well past its hungry days but still thriving, and of the ways in which a group that started as a cipher connected by RZA’s fixation on supreme mathematics became an international phenomenon. Because the Wu-Tang Clan is no one man, the Wu-Tang Clan abides by no one set of principles. That means the fighting will probably never stop, but it also means that when push comes to shove, every one of them will always come home again.

Where’s It Playing? The full four-episode series is now available on Showtime.