"I am excited about what we’ve got going on" 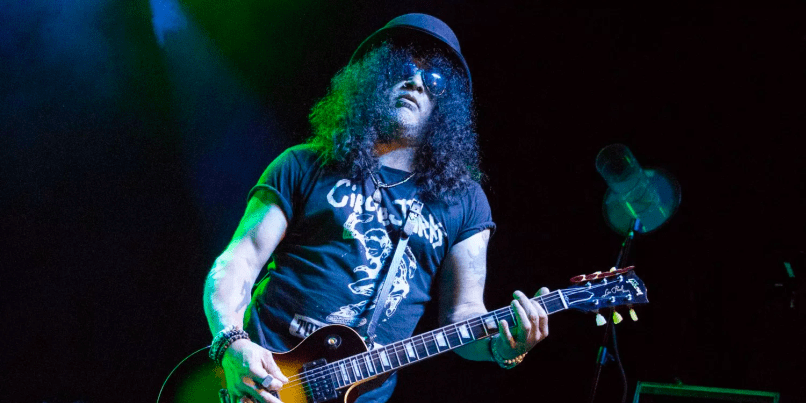 In a new interview, Slash has confirmed that Guns N’ Roses have already started working on new music, and will hit the studio to record a new album following a run of fall tour dates.

In speaking with Detroit radio station WRIF’s “Meltdown” podcast (listen below), Slash explained why he was a bit vague in recent interviews when asked about new Guns N’ Roses music. “The thing is, we hadn’t really done anything yet, and I don’t like to say anything. You know how people use it to promote shit and lie through their teeth? So I just wanted to be honest about it, and so there was really no telling what we were gonna do at that point.”

He added, “But at this point, I do know that we are gonna do this run [of fall shows], and we’ve already started working on stuff. So, there you go.”

Slash also addressed a recent report that a picture of his guitar rig setup on social media likely meant he had already been at Axl Rose’s house working on the album. He said, “There was a rumor that I was over there, and it was before I had even been there. So, I was, like, ‘Jesus Christ.’ And that’s just a pain in the ass and annoying. But I am excited about what we’ve got going on and everything, so it’s gonna be cool.”

In our own interview with Slash last month, the guitarist told us that he “would hope” that a new Guns N’ Roses album will arrive before the next full-length effort from his band Slash Ft. Myles Kennedy and The Conspirators.

A new Guns N’ Roses album would mark the first LP of original material featuring Slash, Axl Rose, and Duff McKagan since the Use Your Illusion albums came out in September 1991.

Slash Ft. Myles Kennedy and The Conspirators are playing three nights in Brazil over the next week, before hitting Europe for a jaunt that runs from early June through early July. After that, they’ll return to North America for a monthlong summer tour that kicks off July 15th in San Francisco.

Guns N’ Roses, meanwhile, are scheduled to play the Louder Than Life festival, the Austin City Limits festival (two weekends), and the Exit 111 festival this fall.