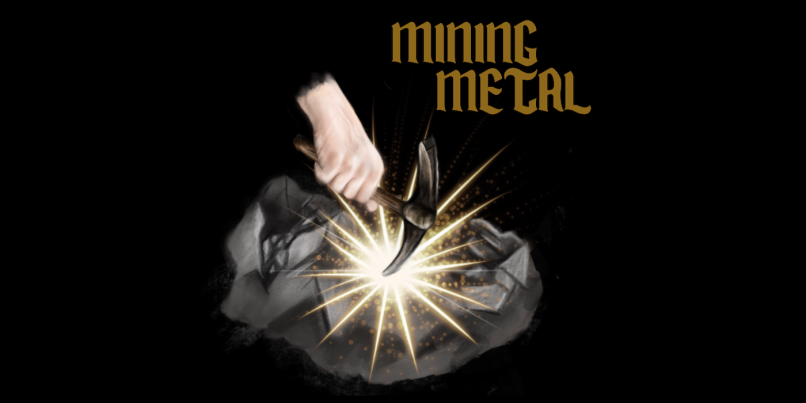 The late spring is a good time for heavy metal. It tends to be fertile ground for bands who wish to tour in the summer or play one of the season’s many large festivals want their newest material on store shelves, or at least on streaming platforms.

Special notice in May goes out to Italian label I, Voidhanger, which released three of the eight records in this month’s column, on the same day no less. These choices don’t stem from label favoritism, but they do reflect our taste for the eccentric. I, Voidhanger specialize, generally speaking, in weird death and black metal — for example, one release covered below is the only all-acoustic death metal record we can recall.

Another highlight of this month’s “Mining Metal” column is an exclusive premiere of the Finnish band Nucleus’ new album, Entity, via Unspeakable Axe Records (stream below).

Other releases this month use extreme metal as a portal to reach back into the avant garde and progressive rock of the ‘70s, or the industrial of the ‘90s. Even the more straightforward fare has something new and exciting to say about the state of the underground in 2019. — Joseph Schafer

Bright Curse – Time of the Healer

For almost a decade California label Ripple Music has been a repository for some of the finest guitar-based music at the nexus of stoner metal, psychedelic garage, and the perennially influential desert rock scene. Put more simply: if it’s new and it sounds like Black Sabbath, Roky Erickson or Kyuss, and it’s good, chances are Ripple Music puts it out. The best bands, however, don’t just keep well-established genre tropes alive; they enhance them and mutate them into new forms without sacrificing songwriting, and that’s exactly what Bright Curse do on their new album, Time of the Healer. Formed from the ashes of French outfit Soul Manifesto, Bright Curse manage to keep some of the francophone shoegaze vibes alive while also incorporating the pastoral folk tradition of England into their music — dig that flute! Think Fu Manchu playing Syd Barrett-era Pink Floyd on Alcest’s gear. Buy it via Ripple Music. — Joseph Schafer

Despite the rather cosmic and pessimistic intro on the new Epectase album Astres, the LP quickly reveals itself to have more groove and ’70s rock/prog heart than black metal angst. Granted, this is not uncommon in this space of extreme music, which seems to use metal as a primordial element the same way greats like Captain Beyond and Uriah Heep. Of course, Epectase know they aren’t in the past so they still let it rip every now and again, settling into blastbeats and shrieks. It’s strange to describe a black metal record as fun, but this feels like the same kind of open-chested, hair-billowing prog-psych fury as Led Zeppelin at their most tripped-out. Save for the vocals, this record wouldn’t be out of place in any collection of great ’70s prog deep-cut records. Buy it via I, Voidhanger Records. — Langdon Hickman

Esoctrilihum – The Telluric Ashes of the Ö Vrth Immemorial Gods

If Onkos is the kind of experimental fringe columns like this are designed to suss out, then Esoctrilihum is the bread and butter. A progressive mixture of black metal, death metal, and folk all wrapped up in a loose fantasy/sci-fi concept, The Telluric Ashes of the Ö Vrth Immemorial Gods by Esoctrilihum is the kind of macroscale widescreen cinematic approach to extreme music that reminds you of why you fell in love with it in the first place. This is decidedly not party music, demanding your headphones and perhaps a good book in hand; imagistic stabs of cracking seismic plates and bolts of magma slashing at the sky abound, a psycho-cosmos of planetary generations. Esoctrilihum deliver the kind of lateral thinking right-brain black/death metal that reframes metal as a realm of infinite imagination, a caelestium of doorways. Put on a good set of cans, stare at the cover, press play, and soar ever away. Buy it via I, Voidhanger Records. — Langdon Hickman

Sweden’s Martyrdöd play D-beat, and they do so very well. For some readers, that’s going to be enough to justify clicking the “play” button below. Others may require an explanation: The D-beat, popularized (though not invented!) by British punk legends Discharge in the early ‘80s, is an especially driving drum pattern that has since become the calling card for a certain fusion of hardcore punk and death metal — it’s as critical to crust punk as the “Amen” breakbeat is to drum and bass. In the hands of determined Swedes such as Wolfbrigade, Disfear and, yes, Martyrdöd, D-beat means consistently fun and often politically poignant music. To the surprise of some, Martyrdöd actually use a few non-D-beats on their eighth album, Hexhammeren (“the hammer of the witches”). To the surprise of none, Hexhammeren is a perfect mosh soundtrack. Buy it via Century Media Records. — Joseph Schafer

While Florida and Sweden are most often cited as death metal’s points of origin, Finland also produced their own less popular though no less potent take on the genre in the late 80s and early ‘90s, characterized by idiosyncratic and often dissonant riffs — Convulse and Demilich are good examples. In recent years the Finnish style has gained wider traction and is an audible influence on bands like Spectral Voice and Tomb Mold. Add Nucleus to that list of Finnworshipp death metal. On their new album Entity, the band leapfrogs to the forefront of this micro-scene, with songs that expertly balance memorable riff patterns with eldritch weirdness. But don’t take my word for it, stream Entity in its pummeling sci-fi-loving entirety below. Buy it via Unspeakable Axe Records. — Joseph Schafer

Onkos is presented as an avant-garde acoustic death metal record, but that’s not quite accurate. You’ll have a better experience approaching it as an avant-garde folk record, sitting closer to Comus and that sort of metal-influencing dark and complex acoustic music. The vocals are growls throughout, but for a concept record about cancer it feels only fitting, like a rough tumescent growth within the fibrous strands of interweaving acoustic lines. A challenging but rewarding record. There are notes at times of the 1969 Cromagnon record Orgasm on Onkos, drawing from the same well of proggy, experimental folk mixed with a primitivist mentality. It often feels like you are dancing in caves, body smeared with mud and natural paints, unspooling into some long-buried Hyborian folk practice. Buy it via I, Voidhanger Records. — Langdon Hickman

Germany has long been home to forward-thinking extreme metal — from the improvisational prog of Grobschnitt in the ’70s to the brutalism of Sodom and Destruction in the ‘80s, who would predict the rise of extreme metal in the 90s, not to mention the neoclassical shredding on Mekong Delta. The country’s current torchbearers for outside-the-box riffage are Valborg, who meld the Teutonic thrash lineage with a martial and industrial-influenced rhythmic approach. Those seeking the pounding of Rammstein with a much more aggressive edge will find something to like, here. Those nostalgic for the golden age of Wax Trax! Records, as well as the golden age of Germanic blackened thrash a la Sodom, are their target audience. On their new album, Zentrum, Valborg deliver maybe their most consistent collection of fire drills yet. Buy it via Prophecy Productions. — Joseph Schafer