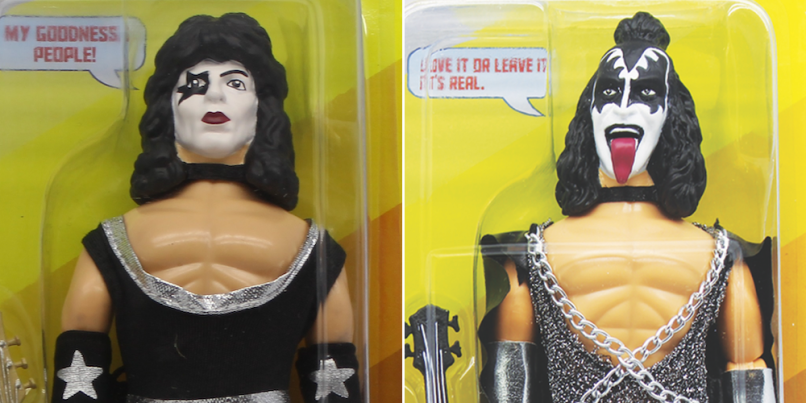 If you were a child of the ‘70s and a fan of rock music, chances are you owned one, two, three, or all four of Mego’s KISS action figures. Originally issued in 1978, these toys have remained quite popular with KISS fanatics and collectors over the years — fetching a pretty penny on eBay (especially if they were unopened).

Now, under the Marty Abrams Presents Mego line, all-new officially licensed Demon (Gene Simmons) and Starchild (Paul Stanley) figures have been created to tie in with KISS’ “End of the Road” farewell tour.

Abrams, who took over the original Mego company from his parents in the early ’70s and helped turn it into an action-figure behemoth, was kind enough to check in with Heavy Consequence to discuss the new wave of KISS figures, the appeal of Mego dolls to both older collectors and young kids, and more.

ON HOW MEGO AND KISS FIRST COLLABORATED TOGETHER IN 1978

Back in the ‘70s, my son Ken asked me to take him to a KISS concert. While we were there, so many people in the crowd were wearing KISS makeup, KISS t-shirts, as well as buying posters and other merchandise at the show. At that moment, it came to me to make KISS action figures for the KISS Army of diehard fans. I knew right away this was something that they’d want to buy. Soon after that, we reached out to the band and it ended up being one of our most famous collaborations.

ON THE CONTINUED POPULARITY OF THE 1978 MEGO KISS FIGURES

The original Mego KISS action figures are almost considered “required collecting” by Mego fans, rock music fans, and rock musicians alike. Over the years, it’s been fun for us to see that people still have and cherish their originals, lovingly displaying them and saving the original boxes. We’re glad to be a part of that piece of rock music history, and we’re excited for today’s generation to be able to partake in it, too.

Of course, we’re also KISS fans, and since the original collaboration was such a hit, it was a natural next step for us to include the iconic band when we decided to relaunch Mego Corporation with the Marty Abrams Presents Mego line.

ON WHY THERE ARE NO NEW SPACEMAN OR CATMAN FIGURES

When we first relaunched the brand exclusively at Target, we introduced the collection in waves, and there was one music character for each new wave. Jimi Hendrix was the choice for wave one, Starchild for wave two, and the Demon for wave three. Catman and Spaceman have always been part of our plan for future action figures. Catman and Spaceman will return in the Marty Abrams Presents Mego line in the near future.

The difference between the 1978 figures and the 2019 figures is the size, and their apparel. The original 1978 figures were 12 inches, and the 2019 editions come in either 8-inch or 14-inch action figures. The original KISS outfits were based on their “Love Gun” tour, and todays are based on their “End of the Road” farewell tour, which is happening now.

ON THE PROCESS OF MAKING FIGURES TODAY COMPARED TO THE ‘70s

Our process has not changed drastically since 1978. However, we’ve been able to leverage the advancements in technology by doing digital sculpting, which allows for better accuracy and symmetry than in previous versions. Our action figures today still feature our signature 14-point articulation.

ON WHETHER MEGO WOULD LIKE TO WORK WITH OTHER ROCK ACTS

Of course! There are many, many artists we’d love to work with. Musicians and performers are like real-life superheroes and their styles are always evolving, but capturing them as action figures in real-time preserves those appearances and moments forever. It’s incredible to see the looks of the original figures, and how it instantly brings you back to that time. We hope to continue doing that for today’s generation so they can look back on those memories, too.

ON WHAT MEGO HAS IN STORE FOR ITS DEAL WITH TARGET

When we launched the new line, it was exclusive to Target, and they have been a tremendous partner to work with. We’re now selling with other retailers which is exciting, but of course Target is still a major retail partner with us. This next year we will be heavily focusing on introducing superheroes, sci-fi, and horror characters in addition to the music and film legends. Our new releases will continue to feature characters that first appeared in the ’70s and ’80s, while we will also reveal new contemporary characters to the Marty Abrams Presents Mego line.

ON WHETHER MEGO’S CUSTOMERS ARE MOSTLY FORTY-SOMETHINGS, OR YOUNG KIDS

We’re seeing a mix of both — which is phenomenal! We’re thrilled to see that our original fans are taking to the new action figures with just as much as excitement as before, and we love that we are able to bring back those happy memories. We’re also seeing kids that are enjoying the action figures, as well. In many cases, their mom or dad may have been a fan so it brings in the nostalgic factor, but even today, action figures are a favorite toy for kids. We have reissued many classic characters that kids today recognize, so it happily ties in both.