"Most people believe that covering 'Stairway to Heaven' should be illegal" 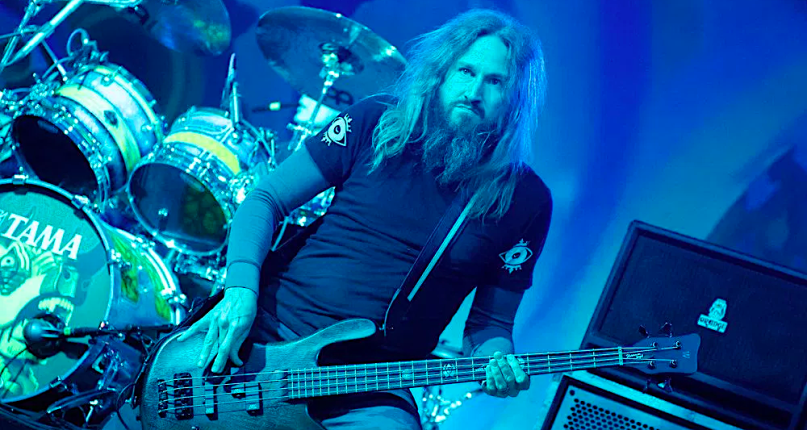 Mastodon experienced a tragic loss last year when their longtime manager, Nick John, passed away from pancreatic cancer. In honor of their beloved manager, the band recorded a cover of the Led Zeppelin classic “Stairway to Heaven”, John’s favorite song from his favorite band.

The metal act’s cover of the iconic Zeppelin song, which they’ve dubbed “Stairway to Nick John”, was released as a 10-inch vinyl single on Record Store Day, immediately selling out, and on May 17th, the song will be released digitally worldwide. Featuring lead vocals by drummer Brann Dailor, Mastodon’s version is true to the original, while adding a bit of the band’s signature heaviness. Proceeds from the track will benefit the Hirshberg Foundation for Pancreatic Cancer Research.

Mastodon will also embark on a North American summer tour with Coheed and Cambria and Every Time I Die, during which they’ll perform their 2009 album, Crack the Skye, in its entirety at each stop in honor of its 10th anniversary.

We recently caught up with singer-bassist Troy Sanders to discuss Nick John’s impact on the band, the Zeppelin cover, the summer tour, plans for a new Mastodon album, and the band’s relationship with Game of Thrones over the years. Read our interview with Sanders below:

To say that Nick John was an integral part of our band would borderline be an understatement. We credit every step we’ve made since 2004 — so for 15 years, every step we’ve made had been with Nick’s guidance. I always considered Nick a friend before I considered him our band’s manager, the type of relationship we had. So he was appreciated and loved like a fifth member of the band, without a doubt.

Yeah [laughs]. Most people believe that covering “Stairway to Heaven” should be illegal, and I’m one of the people that agrees with that. However, this situation was special in that Led Zeppelin was Nick’s favorite band and “Stairway to Heaven” was his favorite song. So it only made sense that we should put the blinders on to the fact, by many, it’s considered wrong to take the an attempt at covering “Stairway”. We felt it didn’t matter. This was something special. Doing this cover was more important than what our brand stands for.

How the recording came about is that we were asked to perform “Stairway” at Nick’s service. So once we did that, what felt like a very daunting task turned out to be very sweet and very beautiful. And we played it in front of several hundred people that were in the church service where Nick’s body was lying, so it was overwhelming to say the least. That’s what closed the ceremony and afterwards, so many people came up to us and said that was beautiful — that was touching. It was uplifting because it was music and it was connecting with people, as music does, in a special way that I consider magical.

So afterwards, with so many people complimenting us on doing such a tasteful piece of music, we decided that we could even take that further and record a version in his honor. And then number one, supporting Record Store Day, which we’ve always tried to been a part of for the past five or six years, we’ve put up something special Record Store Day and supported independent music stores and number 2, any and all money that was made off it would go toward a charity. So it was an absolute win-win situation. And that’s the reason that we decided to record the studio version of “Stairway”.

On what it means for Troy to help fight against cancer, especially given his own wife’s battle with breast cancer

It’s the right thing to do. Cancer is such an evil and stealth disease that touches nearly everyone’s lives, that I think it would be wrong to not spend time and money and energy to support any type of cancer research or cancer funding-type charity. and I encourage any and everyone to take part in any charity that involves a disease related to something that they’ve gone through within their family or themselves or a friend that is in their life. I don’t think there can be enough of that, because it’s the most horrible thing I’ve ever witnessed.

On his recent Dub Trio collaboration “Fought the Line”

I think Dub Trio is one of the most underrated bands out there, and they’re just incredible musicians and fantastic people. I love the band very much. A few years ago, they asked me if I’d be interested in collaborating or contributing vocals to a track and they sent the song over and I’m always a big fan of jumping at interesting and unique opportunities. So I was very happy to do it. And this was at the time when Mastodon was writing Emperor of Sand, which was blanketed with various cancer stories that were happening in our lives. I didn’t have the vision to step outside of that box that I was in, so I had just written a poem to cancer itself and then turned that into the lyrics for “Fought the Line” with Dub Trio. I sent it back to those guys and they were very proud to have me be a part of it, and I was happy that they asked me. So that was yet another example of how a beautiful relationship can happen within music and art.

I’m in Atlanta right now, and we’re having band practice and that’s what we’re doing today is we’re digging in to recondition ourselves on some of the songs that we haven’t played in 10 years. So it’s a good challenge. It’s nice to dig back and play songs that we’ve written and have just overlooked over the past 10 years of setlists. We’re not trying to live in the past, but that record, Crack the Skye, is what really put us on the map as a band that was a little different than the others. We had the determination and the courage to dive into the personal storylines to create the narrative of Crack the Skye, and musically, we felt that that it was coming from a place that was deeper than anywhere we’d come from before.

So, combined, it just turned out to be a very successful record for us. It was obvious that we were connecting with people. It was very relatable, what we were talking about, and that’s when our fan base continued to grow and it just become very obvious in our eyes that were on the path to something good and wonderful. That was my longwinded point that we’re not trying to just live in the past. We’re just trying to do a few weeks of shows, just touching on that album and the power and beauty that it possessed.

On the tour lineup of Mastodon, Coheed and Cambria, and Every Time I Die

We’ve done many shows Every Time I Die. They’re friends of ours, and they’re fun. For them to be first is quite fitting and perfect. For us to go out with Coheed, we’ve crossed paths with those guys many times and I think it’s going to make sense, especially with us performing Crack the Skye in its entirety. That’s about as proggy as we get. And I think that the bill is fitting for their crowd, our crowd and the crowd that we share together. So I think it’s the perfect band to play in front of to do this album in its entirety. And, so I hope people walk away happy. That’s the intention. And it should be a solid evening of music and of interesting notes — a lot of notes, and a lot of interesting sounds coming from the stage. So we certainly hope that people enjoy it and come take the ride with us.

Well that was the intention. We just completed the European tour in February and months ago, it felt like that would be a good stopping point of the Emperor of Sand touring cycle. But then this opportunity came up to co-headline with Coheed, so we decided this would make sense and it would be the 10th anniversary of Crack the Skye, so we decided to take the summer tour. So, instead of writing a new album, instead of diving head first into new new material right now, we’ve kind of just been enjoying a little home time and then rehearsing a lot of old material for this set that we’re doing this summer. So, we don’t really talk about it or mark the calendar, but just knowing how our band’s operated for the past 19 years, once we recover and enjoy some home time after the summer tour, we’ll probably, all four of us, I imagine, will be very excited to dive head first into new material. And we never put timelines on us. We never put those restrictions on ourselves. We just want everyone to be excited about it. So it needs to come naturally. But I would imagine that we’ll work [on a new album] in the fall of this year.

We’re always trying but each band and each band member has to live by the calendar, and we talk about it months in advance to just get together for five days in a row. We really have to align four calendars together and see where the windows of time will allow. First and foremost, we’re all really good friends who enjoy each other’s company and that’s the reason I have other projects. So the desire to write and record new music is always there, but I’ve kind of been in the world of Mastodon the past two years and I’m very grateful for that.

On Mastodon’s relationship with Game of Thrones, with the show now coming to an end

I think that knowing that Dan Weiss, the co-creator of the HBO series, is a huge Mastodon fan, it just just kind of separates that fantasy into a reality. The past two times we played in Belfast, he’s come out to our shows, because he’s out there filming nonstop. We just kind of pick his brain with how his operation works and he picks our brain of how the touring cycle works. To just have that human relationship and knowing that these people respect our band and we appreciate and respect their show, as do millions of other fans, it’s like one of those “hey, we’re all the same” moments. To me that’s the most special thing about opportunity and happenstance that these moments happen where you’re just enthralled with them and vice versa. It’s kind of like meeting your heroes, and shooting the shit with your idols. And it never ceases to amaze me.