Harrison Ford pays his respects to Peter Mayhew: “He invested his soul in the character” 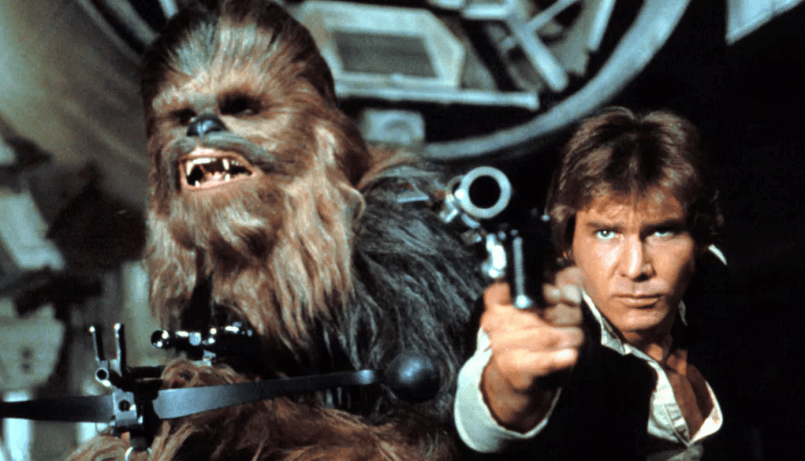 In the wake of Peter Mayhew’s passing, many of his co-stars and collaborators have paid their respects online. Among them, of course, is Mayhew’s longtime on-screen pal Harrison Ford, who played Han Solo alongside his Chewbacca in four films.

“Peter Mayhew was a kind and gentle man, possessed of great dignity and noble character,” Ford wrote in a statement. “These aspects of his own personality, plus his wit and grace, he brought to Chewbacca. We were partners in film and friends in life for over 30 years and I loved him. He invested his soul in the character and brought great pleasure to the Star Wars audience.

“Chewbacca was an important part of the success of the films we made together,” he continued. “He knew how important the fans of the franchise were to it’s continued success and he was devoted to them. I and millions of others will never forget Peter and what he gave us all. My thoughts are with his dear wife Angie and his children. Rest easy, my dear friend.”

Ford’s sentiments were echoed by director George Lucas, who wrote in his own statement, “Peter was a wonderful man. He was the closest any human being could be to a Wookiee: big heart, gentle nature … and I learned to always let him win. He was a good friend and I’m saddened by his passing.”

Mark Hamill also tweeted his respects, writing: “He was the gentlest of giants-A big man with an even bigger heart who never failed to make me smile & a loyal friend who I loved dearly-I’m grateful for the memories we shared & I’m a better man for just having known him. Thanks Pete #RIPPeterMayhew #Heartbroken @TheWookieeRoars.”

He also shared a number of behind-the-scenes photos, all of which you can view below. We’ve also gathered a few more tributes that have been posted online from his co-stars, particularly Billy Dee Williams, Rian Johnson, and CEO Bob Iger.

He was the gentlest of giants-A big man with an even bigger heart who never failed to make me smile & a loyal friend who I loved dearly-I'm grateful for the memories we shared & I'm a better man for just having known him. Thanks Pete #RIPPeterMayhew #Heartbroken @TheWookieeRoars pic.twitter.com/8xbq9HEWF2

Much more than Chewie to me…My heart hurts…I will miss you my dear friend…thanks for the great memories! #RIPPeterMayhew #StarWars pic.twitter.com/0DfCo59zpG

RIP Peter Mayhew. To create a beloved character with warmth and humor is a testament to any actor’s spirit. To do it under a half ton of yak hair takes a true legend. ❤️❤️

The @WaltDisneyCo mourns the loss of our beloved #chewbacca portrayer, #PeterMayhew. Peter was larger than life in so many ways…a gentle giant playing a gentle giant. Rest in peace.

R.I.P my friend #PeterMayhew I’m glad I got to see you in Chicago and give you a big hug one last time. Love to the Mayhew family and all who’ve been touched by him. #starwars #starwarsfam #chewie

Peter Mayhew created one of the greatest film characters of all time. Chewbacca was funny, courageous, and caring. He did it all without the benefit of speech, just that vocal growly cry that 1 in 100 fans can do real well when they're drunk. He was always really nice to me.#RIP