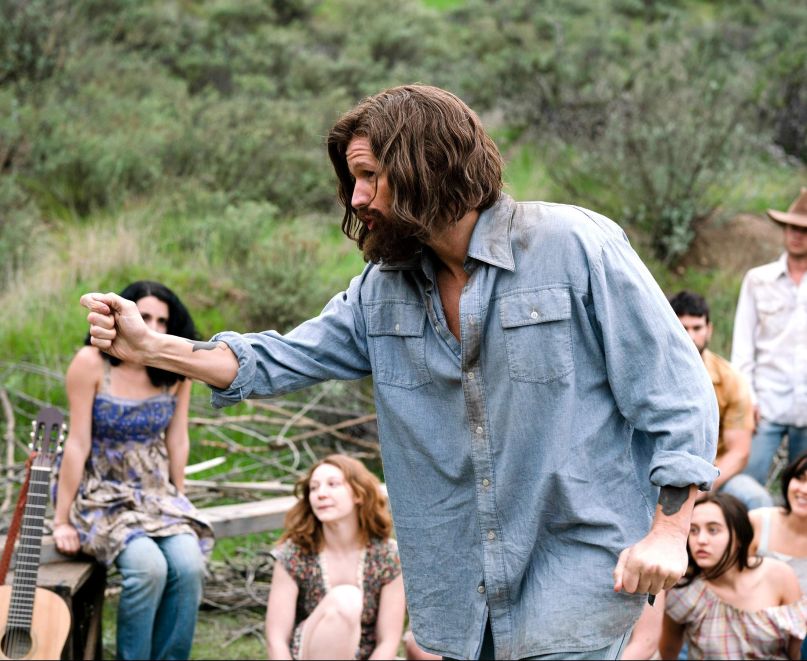 The Pitch: In The White Album, Joan Didion writes that “Many people I know in Los Angeles believe that the Sixties ended abruptly on August 9, 1969,” the night Sharon Tate and four others were brutally murdered by members of the Manson Family. Much attention has been paid since to the psychology of Charles Manson himself, a disgruntled aspiring musician who channeled his hatred and bitterness into a slavish free-love cult in the California hills.

But what of the women who participated in Manson’s commanded killings: Patricia Krenwinkel (Sosie Bacon), Susan Atkins (Marianne Rendón), and Leslie Van Houten (Hannah Murray)? After their conviction, they sit isolated in a separate wing of the prison, living in a feedback loop of adoration for their dear Charlie. To help them move beyond their conditioning, therapist Karlene Faith (Merritt Wever) begins a program to unpack the psychology behind their actions. Meanwhile, we see Leslie (whom Manson named Lulu) start her life at the Family, interacting with Charlie, and the women’s role in the murders that landed them in prison.

American Psychos: Between this and Extremely Wicked, Shockingly Evil and Vile, May 2019 is already a banner month for films unpacking the psychology of women who fall for charismatic, murderous men. Charlie Says distinguishes itself by coming courtesy of the creative team behind American Psycho, writer Guinevere Turner and director Mary Harron, a duo fascinated by the vagaries of the male ego and the socialization of the women in their orbit. It’s hard to think of a better theoretical match of filmmaker and material, honestly; if anyone could tell the Manson story fairly and intimately from the perspective of the Manson women, it should be Harron and Turner.

It’s then especially aggravating when Charlie Says can’t quite seem to settle on a unified perspective about Manson himself. He clearly has a powerful hold on all three women, even in prison; the film’s title refers to the preface they use for every challenge to Manson’s brainwashing. They think he’s a prophet, the man with all the answers, reinterpreting Beatles lyrics to foretell the coming race war and offering them the chance to evolve into elven angels. But when Harron flashes back to Lulu’s time with the Family, she paints an entirely different picture of the man. There he’s a shambling clown played with disappointing bluntness by Matt Smith, who leans into all of Manson’s tics, making him a weirdy-beardy stick insect whose cult following is a transparent ruse to boost his musical career.

Are these subjective flashbacks from Lulu’s perspective, or objective glimpses into the pathetic nature of the real man? They’re certainly framed like the former, but function much better as the latter. It’s hard to believe that Lulu’s mental version of Manson’s ‘audition’ for famed music producer Terry Melcher sounds the way Harron and Turner present it onscreen: Smith’s shambolic folk ballad is an off-key dirge, while he harangues three of his women to do some topless go-go dancing next to him, as if that’s what the presentation really needs. We’re in on the joke, certainly — Harron shows Manson smashing his guitar as a final punchline — but should we be?

“Women’s Studies? Far Out”: Bringing the tonal strangeness of the Manson sequences into further relief is the deprogramming story that frames it, which is where Charlie Says benefits most from its female gaze. Like with Harron’s previous project, the stellar Netflix series Alias Grace, Charlie Says is intimately concerned with the psychology of women restricted by patriarchal social structures, and the often murderous lengths to which these structures drive them. When they arrive, Charlie tells them they are beautiful “seekers” looking to escape the control of civil society; he knows that society teaches women to hate their bodies, and thus draws them in under a veil of acceptance. Of course, once the slightest inch of his control is threatened, he comes down hard on their “tiny female brains,” often with fists. After one beating, a fellow cult member tells Lulu that “getting hit by the man you love is no different than making love to him.” It’s a chilling glimpse into the way Manson instilled a deep sense of internal misogyny into each of his family members, even as it clashes with Smith’s inherent goofiness in the role.

But when the film blissfully returns to Faith’s attempts to deprogram the Manson women, that’s where Charlie Says reaches its most assured highs. As always, Wever is a magnetic screen presence, gracefully commanding a room of brainwashed women and engaging with their perspectives and needs in an honest, empowering way. Harron and Turner contrast Faith and Manson as conflicting parental figures for Leslie, Patricia, and Susan, Manson with the stick and Faith the carrot. It’s rare that a film’s framing device ends up being more compelling than the story it’s built around.

Please Don’t Let Me Be Misunderstood: There’s a reassuring humanism to Charlie Says‘ entire approach — a steadfast desire to understand the manipulation and brainwashing that led otherwise innocent women to kill. As a consequence of that, however, Harron and Turner spend precious little time on the actual Tate murders that gave these women, and Manson himself, such notoriety. In the film’s final act, the escalation of the Manson family from eccentric free-love cultists to mass copycat murderers arrives lightning-fast, and before long the protagonists are coated in blood at the Tate house.

At first, the marginalization of the murders themselves seems like an unfortunate bug, but it’s actually a feature of the film’s emphasis on depicting these women as human beings underneath all the programming. There’s a distance to the stiff framing and obscured POV shots of the murders themselves, almost as if it’s Manson’s hand guiding the knives, rather than their own. While it teeters close to arguing the womens’ blamelessness for the murders they committed, this bold approach also allows Harron and Turner to center their perspectives and emphasize the abuse that led them there.

The Verdict: Much like the slow march toward sanity depicted throughout the film, rooting for Charlie Says can often be a frustrating exercise in patience. There are two different perspectives on the Manson story at work here — the need to break cycles of misogyny that drive women to powerful but dangerous men, and a dark tragicomedy about Manson himself — each of which would be more interesting if they had been more cleanly reconciled. Murray and Wever are as attuned to their roles as Smith is awkward and miscast in his. But perhaps that’s an appropriate fit for Harron and Turner’s divisive-yet-gripping take on this story: at the end of the day, the Manson women are deeper, more fascinating, and more worthy of exploration than the insecure man that connected them.

Where’s It Playing?: Charlie Says straps on its guitar and takes hold of your soul in select theaters on May 10th.