Filthy, sweet, and hilarious, this is far more than your average teen party flick 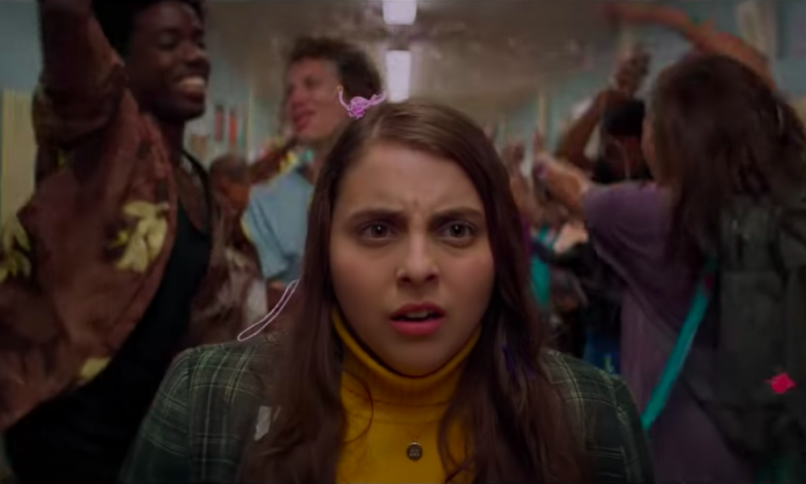 The following review was originally published as part of our coverage of the 2019 South By Southwest film festival.

The Pitch: Molly (Beanie Feldstein) and Amy (Kaitlyn Dever) are a pair of overachieving squares with very bright futures — Molly is off to Yale in the fall, while Amy is spending a year doing humanitarian work in Botswana. Their high-minded snobbery withers, however, once they discover that everyone else in their graduating class, despite having spent the last four years partying, are just as prepared.

An existential crisis strikes: Could they have balanced the work and the parties? On the night before their graduation, Molly and Amy cast off the Ken Burns documentary they planned on watching and embark on a life-changing night of party-hopping, one that ignites their respective libidos and forces them to confront a future where they don’t see each other every day.

SuperGirls: “Superbad about girls” is an easy way to categorize Booksmart, a read emboldened by the fact that Feldstein, who made a splash in Lady Bird, is the sister of Superbad star Jonah Hill. But while the tonal, thematic, and narrative dovetails are undeniable, Booksmart‘s female lens — Susanna Fogel, Emily Halpern, Sarah Haskins, and Katie Silberman are the credited writers — is enough to cement it as a singular entity, one that, as Blockers did last year, gives the girls the kind of blush-inducing onscreen raunch that’s historically been left to the boys.

Sex, drugs, and peril flood just about every turn, each of which pivots at a manic, sweaty pace that deftly mirrors the giddily nervous energy of its leads. Adding texture to the proceedings is Olivia Wilde‘s restless direction, which makes room for a few indulgent but genuinely amusing detours, such as a stop-motion sequence that transcends its narrative uselessness by cramming in about a hundred great jokes. Wilde’s camera moves at the pace of the story, becoming less static and infinitely bolder — an out-of-nowhere dance sequence will soften even the stoniest hearts — as the evening’s stakes grow ever higher. The result is a confident, visually (and sonically) sumptuous directorial debut from the actress, whose lens exudes a genuine love for the characters.

Friends Forever: Speaking of Molly and Amy, Feldstein and Dever (both of whom are on the verge of superstardom) deserve an immense amount of credit. Each deliver fantastically layered performances that show how squareness isn’t the same as blandness. Though ensconced in an intellectual bubble, the pair are as horny, goofy, and wickedly smart as they are insecure and vulnerable. To slot them, or any of the film’s vast ensemble, into the archetypes central to the genre is an exercise in fruitlessness. Truly, it’s Molly’s habit of placing her classmates into those categorized boxes that Wilde and the writers put under investigation. It’s that kind of compartmentalization, after all, that often serves only to prop a box up around yourself.

The Gang’s All Here: Evoking Can’t Hardly Wait in the hyper-modern weirdness of its ensemble, Booksmart pads out its supporting cast with teens that, no matter how big or small their role, brim with personality. Noah Galvin and Austin Crute stand out as a pair of sassy, ever-annoyed drama saps, as do Billie Lourd and Skyler Gisondo as the richest in a sea of rich kids. Lourd’s gonzo turn, the absurdity of which almost veers into the supernatural, draws the most laughs and gasps, but it’s Gisondo’s quotable, good-hearted dweeb that grows the film’s heart by yet another three sizes. Nerds don’t exist in the world of Booksmart, but the archetype takes on a new form in the guise of his confused would-be Gatsby.

The Verdict: It’s easy to get swept up in Booksmart‘s pace and pleasures, but take a breath and you might find yourself longing for a world that’s at least a touch more familiar.

While Molly and Amy are recognizable, lovable avatars, the pristine, upper-crust environment where they live — one where it seems every student has the cash and connections to attend an Ivy League school — often rings hollow. This is nothing new, of course; teen comedies have long filled their frames with twenty-something teenagers and parties that look more produced than realistic. Booksmart, though, is almost oppressively slick, and it suffers a bit for couching itself so firmly in its own bubble.

However, that’s not enough to distract from Booksmart‘s charms, or from the simple, heartfelt portrait of young friendship at its core. As with Superbad, the movie never forgets that all the boys, girls, and bad decisions that swarm its story are in service of the rich, ever-mutating bond of its leads. It’s a comforting message, and a vital one, for the generations of teens that will no doubt come of age as it plays and replays in the background.