She also shares her two cents on the final season, including Starbucks flub 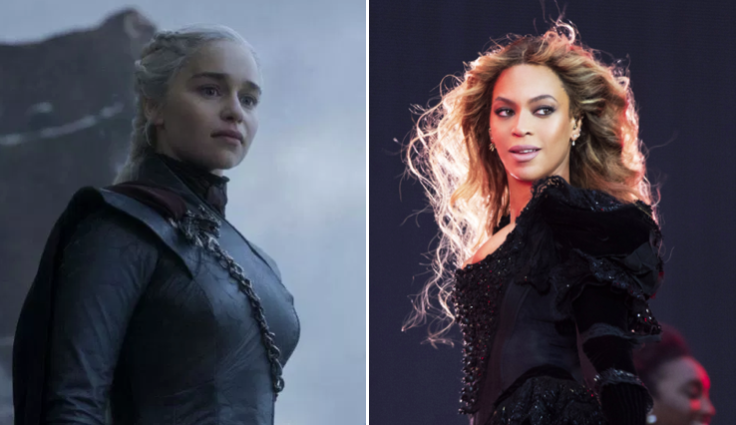 On Sunday night, HBO’s Game of Thrones finally wrapped after eight epic seasons. So far, the reaction to the finale has been vitriolic, to say the least, though there’s only one fan that truly concerns star Emilia Clarke, aka Daenerys Targaryen, and she’s a Queen herself.

In a post-finale interview with The New Yorker, Clarke explained how she was approached by Queen Bey at the singer’s own post-Oscars party this past February. “I see this vision, this angel, this incredible woman float towards me,” Clarke shared. “I can’t quite control myself. And Beyoncé says to me, ‘Oh, my goodness, it’s so wonderful to meet you. I think you’re brilliant.’ I just couldn’t handle it! I was on the verge of tears.”

However, in addition to worrying she might come off as a rabid fan, Clarke admitted that all she could think about was Dany’s inevitable character turn, and whether that might change Beyoncé’s mind: “…all I wanted to scream was ‘Please, please still like me even though my character turns into a mass-killing dictator! Please still think that I’m representing women in a really fabulous way.’”

She added, “I was just, like, Oh, my God, my absolute idol in life is saying that she likes me, and I know for a fact that by the end of this season she’s going to hate me.” As of publication, Beyoncé has yet to offer her two cents on the penultimate episode, where Dany truly turns, or last night’s finale, though given the online support for Dany, Clarke might have very little to fear.

(TV Review: Game of Thrones Melts “The Iron Throne” and Viewers’ Hopes In Its Series Finale)

Despite that anxiety, Clarke doesn’t disagree with the turn, which she was told two years ago. Although she “took a very long walk around London in a daze, not quite knowing how to digest the news,” Clarke thought the ending was just: “Even for a part that I’ve given so much to and I’ve felt so much for, and for a character that’s seen and lived through so much, I don’t know that there was any other way. But it was a shocker to read.”

She digressed on her reasoning, stating: “I feel like there was . . . The genocide was there. That was always going to happen. And I just think more dissection and those beautifully written scenes that the boys have between characters—that we are more than happy to contently sit there and watch ten minutes of two people talking, because it’s beautiful. I just wanted to see a bit more of that.”

(TV Review: Game of Thrones Proves that War Is Hell But Endings Are Even Harder in “The Bells”)

Of course, no conversation revolving around the series can be had without mentioning Starbucks now, and Clarke was quick to comment on that on-screen flub. “So, I’m just going to let you in on a little Game of Thrones trivia,” she confessed. “We don’t drink Starbucks. So anyone who’s clucking around with a Starbucks cup is someone who is not a cast member. There’s no mocha-wocha-frappuccino anywhere.”

So, who did the cup belong to? Clarke pointed to Craft services, but also teased a couple of possibilities. “It could’ve been anyone’s gin. Or it could have been some very fancy producer’s mochaccino,” she joked, adding, “You’ve got a lot of cast, and you’ve got two-hundred-odd extras in that room. But you know who I could actually quite happily blame? Did you notice some quite familiar-looking extras in that particular scene?”

As most fans will be quick to answer, she’s referring to the cameos made by showrunners David Benioff and D.B. Weiss, who she described as “two people who look slightly like a Metallica tribute band.” All joking aside, Clarke has no idea who left the coffee cup there, contending, “…there are many excuses for the coffee cup for you. Pick whichever one you’d like.”

We’re pretty sure the fans will have no problem blaming Benioff and Weiss. Nevertheless, read the complete interview in which she also digressed on how her past health ailments affected particularly difficult shoots, that controversial scene between Dany and Khal Drogo, and toxic fans.