While trying to shame Bill DeBlasio, Trump Jr. accidentally got into a spat with BTS Army 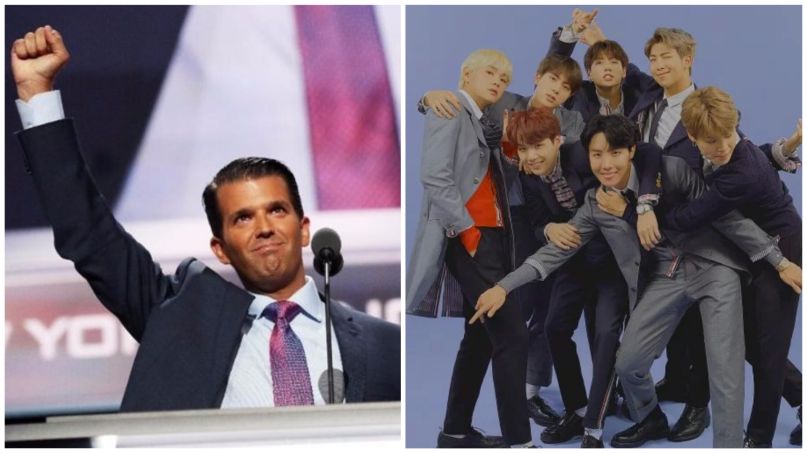 Hell hath no fury like a scorned BTS fan, and Donald Trump Jr. is learning that the hard way.

The eldest Trump spawn recently took a jab at New York City mayor Bill de Blasio, posting a video of discarded blankets and trash on the sidewalks outside Central Park. In the tweet, Donnie Jr. added, “Rather than do a PR stunt ‘run’ for President (we all know it’s going nowhere) maybe @NYCMayor should clean up his backyard first. This video from this morning should tell you all you need to know about his ‘leadership.’ What a clown show!!!”

Rather than do a PR stunt “run” for President (we all know it’s going nowhere) maybe @NYCMayor should clean up his backyard first. This video from this morning should tell you all you need to know about his “leadership.” What a clown show!!! pic.twitter.com/E9kTUQXfTR

However, it turns out the video actually shows sleeping bags, blankets, and other debris left over from the line into BTS’s performance for ABC’s Good Morning America Summer Concert Series. While the show was held on Wednesday morning, eager K-pop fans camped out for days in advance to secure entrance into the performance. The BTS hive were quick to defend the video of the discarded camping gear, explaining they weren’t allowed to bring the items into the venue, though returned within two hours of the show to clean up.

Out of context video — this is from the line of people waiting to see #BTS…it was cleaned up the same day. 5th Ave never looks like this. And any lifelong resident of New York City would know that. https://t.co/COVXUqRgfs

Btw thanks to the team and everyone else who helped clean up the place you know who you are, we finished in about an hour and a half even though we were so tired so let’s hope next time we can be a lil more respectful and ✌️🌱✨ pic.twitter.com/TJc5Ieq4Uo

Now, fans have inundated Donald Trump Jr.’s ill-fated post and mentions, criticizing him for taking the images out of context, spreading dreaded fake news, and just being the general clown that he is. Ironically, the post has had the direct opposite effect he hoped for. Rather than rallying against his father’s political opponent, he has somehow drawn the ire of one of the largest fanbases in the world.  Good one, buddy.