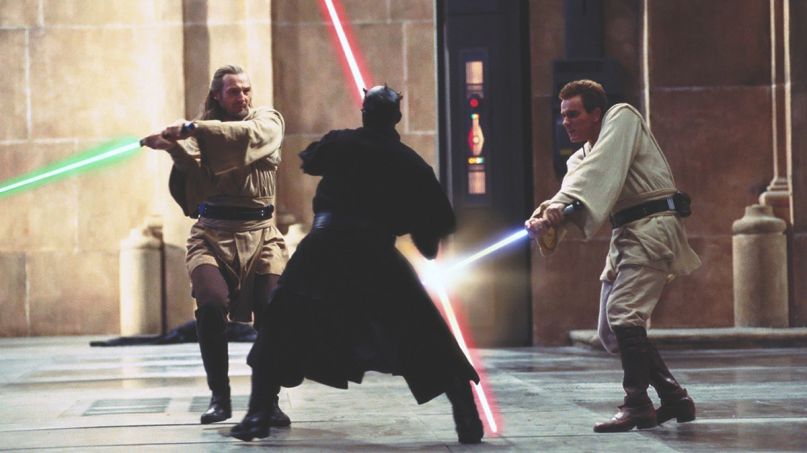 When J.J. Abrams was hired to shepherd Star Wars: The Force Awakens to the big screen, his duties amounted to a single, incredibly difficult task: Don’t screw it up. He didn’t necessarily have to make a great movie — and from a purely cinematic perspective, the odds that he would manage that were virtually nil. All he had to do was make a good Star Wars movie, one that reignited the feelings of childlike adventure that the original trilogy inspired. This wasn’t an act of creation, but of restoration. And for its faults — it’s still difficult to work out how the Starkiller Base actually functions — it’s hard to deny that The Force Awakens was, in fact, a Star Wars film.

Star Wars Episode I: The Phantom Menace, on the other hand, was the precise opposite. In fact, it’s the reason — along with its two sequels, Attack of the Clones and Revenge of the Sith — that a blockbuster synthesist like Abrams was needed to resuscitate the franchise in the first place. On this, the 20th anniversary of the The Phantom Menace’s release, there are aspects of the film worthy of praise, but there’s also so, so much to bury. Despite being the personal brainchild of creator George Lucas, The Phantom Menace took nearly every element of Star Wars that made it a pop cultural touchstone and chucked it out the window. Lucas is on the record as disagreeing with the direction that Disney and Abrams took with The Force Awakens — that he thought they would have better been served taking the franchise in new directions, rather than revisiting the beats of the original trilogy — but The Phantom Menace stands to this day as a somewhat baffling monument to what can happen when new directions end up leading a beloved franchise down the tubes.

It faced the same basic problem as every prequel: The audience already knows the ending. When Jedi master Qui-Gon Jinn (a somnambulant Liam Neeson) encounters the gifted young Anakin Skywalker (Jake Lloyd) on the desert planet of Tatooine, even casual fans of the franchise know that young “Ani” will one day grow up to be the galaxy’s favorite heavy-breathing final boss Darth Vader. Even when the good guys win the day — defeating the evil Trade Federation and freeing the bucolic planet of Naboo — the victories are just another stone on the garden path to Emperor Palpatine’s rule. Attack of the Clones and Revenge of the Sith are intermittently able to use that inevitability to their advantage, leveraging the audience’s expectations against them and whipping up a sense of encroaching dread, but The Phantom Menace doesn’t have that luxury. The events of this film mark the beginning of the end for the Jedi, but the endgame is still too far beyond the horizon to glimpse.

But the biggest problems with The Phantom Menace aren’t related to prequel-itis alone. In trying to create something new for the franchise, Lucas mostly succeeds in jettisoning everything that made the movies great in the first place. Before he was to make Star Wars, Lucas wanted to adapt Flash Gordon serials to the big screen. And when he couldn’t secure the rights, he decided to create his own version. That’s why Star Wars: A New Hope is an adventure film, an ideal blend of space opera, samurai flicks, Westerns, radio serials, and Joseph Campbell literary theory. It’s a movie for kids that allows them to imagine themselves in the shoes of daring, dashing adults like Luke Skywalker, Han Solo, and Princess Leia.

With The Phantom Menace, Lucas made several key miscalculations. For one, it was a movie that mistook movies for kids with movies about kids. As such, Anakin Skywalker feels as organic to the rest of the film as the Trade Federation’s scorpion-like Droidica robots, inventions which practically scream “toyetic.” George Lucas has never been known as an actor’s director, but when his main cast members were Harrison Ford, Carrie Fisher, and Mark Hamill, this wasn’t a problem. When building his entire film around a young and mostly inexperienced performer like Lloyd, it became a major one. Given the film’s broader deficiencies of character development, and Lucas’ own in the writing department, not even fine actors like Neeson and Ewan McGregor are able to pick up the slack.

Another consequence of the film’s family-friendly approach is that the political wrangling central to the film gets far too little room to breathe. The Phantom Menace was meant to chronicle the decline of the democratic Old Republic into a tangle of sclerotic parliamentary maneuvers and runaway bureaucrats, a failure of democracy that paves the way for Ian McDiarmid’s Senator Palpatine to eventually seize power and declare himself emperor. It’s a noble aim, but one entirely at odds with the fact that this film is, again, intended for children. The result is a movie that relies greatly on political intrigue, but has absolutely no appetite for spending actual time with that intrigue.

The technological moment in which the film was made likewise offers scant help. With The Phantom Menace, Lucas had free rein to bring his vision of the franchise to the screen, aided in no small part by advances in CGI that let him build entire cities and characters out of pixels. The result is a movie that looks airbrushed to within an inch of its life, trading in the weathered worlds, vehicles, and characters of the original trilogy for brand-new floor models that sit lifelessly on the screen. The film looks like a million bucks — over a hundred million, actually — but that isn’t enough to buy it a soul. The work that Lucas and his team at Industrial Light & Magic did in these films is a crucial forerunner to the the CGI of today. So while he truly can’t be blamed for how far CGI has come since 1999, the degree to which The Phantom Menace relied on early digital effects was ultimately his choice. Needless to say, Blu-ray is not this film’s friend.

With all of that said, the two sequences in this film that have stood the test of time rely on more than just impressive CGI — and they contain almost no dialogue. Anakin’s pod race on Tatooine is genuinely thrilling, managing to capture some of the life-and-death energy that infused the original film’s Death Star trench run. And the climactic three-way lightsaber duel between Qui-Gon, Obi-Wan and the Sith Lord Darth Maul (Ray Park) is well-choreographed and realistically staged, foregoing the CGI-aided aerials that mark the lightsaber battles of later installments. It also has the good luck to be accompanied by another part of the film that holds up: John Williams’ “Duel of the Fates,” a wonderful piece of film scoring that also shamelessly rips off “O Fortuna.”

For the younger half of the millennial generation and Gen Z, opinions on The Phantom Menace generally seem more favorable, which makes sense. Scientists have a name for this phenomenon: The Space Jam Corollary. If you liked a movie when you were young, the theory goes, you’ll probably like it when you’re older, even if it’s bad. But with the prequels having been firmly supplanted in the cultural consciousness by the more recent films, it’s worth considering the ways in which The Phantom Menace and its sister films were unique, even occasionally admirable. For better and for worse, it’s unlikely we’ll see anything quite like them ever again.

The reason that The Phantom Menace failed on so many fronts is the same reason that a film like it could never be made today: These were George Lucas’ films, and he made them to his own specifications. One of the most valuable franchises and pieces of intellectual property in the known universe was dependent on the whims of a solitary creator. While Lucas had allowed for expansion via the “Expanded Universe” novels from writers like Timothy Zahn and Kevin J. Anderson, any Star Wars movies to be made were going to be made by him, or not at all.

Lucas had also taken a 22-year break from directing by the time he stepped up to take on The Phantom Menace. The rust shows, as does the hubris. And yet it’s the hubris of a single man, instead of a group of executives whose primary concern is their fiduciary responsibility to shareholders. It’s not as though Lucas was a starving, disease-ridden poet scribbling away in his lonely garret during that time, but he also saw movies as something more than lines on a balance sheet. Case in point: Once he finished the story in Revenge of the Sith, he was done.

In 1999, there was nothing in Hollywood quite like Star Wars, and Lucas bringing the franchise back with an entirely new set of films was without precedent at that time. (That The Phantom Menace went on to become the year’s highest-grossing film was of little surprise.) The original trilogy was something of a miracle, but The Phantom Menace showed how even deeply mediocre films could become massive hits, both at the multiplex and the toy store, if audiences had a previous connection with the material. But this was the moment when studios started catching on. By 2001, the top-grossing films would be The Lord of the Rings: The Fellowship of the Ring and Harry Potter and the Sorcerer’s Stone. In 2002, the four top-grossing films included more Lord of the Rings and Harry Potter, in addition to the first Sam Raimi Spider-Man movie and — yes — Attack of the Clones.

When Lucas finally sold Lucasfilm to Disney in 2012, Star Wars officially ceased to be a singular outfit, and instead became the latest weapon in Mickey Mouse’s arsenal. A new trilogy begat spin-off films begat new television shows — both animated and live-action — and now two new sets of trilogies, one from Game of Thrones showrunners David Benioff and David Weiss, the other from The Last Jedi writer/director Rian Johnson. Lucas’ second trilogy spawned a world in which trilogies now come in trilogies of their own. It’s all more than one person could have managed, but it also ensures that a singular vision like Lucas’ is unlikely to come around again.

It’s not entirely too bold to say that without Star Wars, there would be no Marvel Cinematic Universe or Fantastic Beasts and Where to Find Them or Jurassic World or Logan. But while most would attribute that influence to the original films’ artistry, it’s The Phantom Menace whose legacy they should be hailing, at least from the business side. Artistically, The Phantom Menace still doesn’t have much to offer; Lucas’ vision is far too milquetoast and his execution far too muddled for that to be the case. But when it comes to the business of making movies, it bestrides the world like a colossus. Movies like The Phantom Menace are why J.J. Abrams might have been brought in to save the Star Wars franchise, but The Phantom Menace is why also there was a franchise for him to save in the first place.