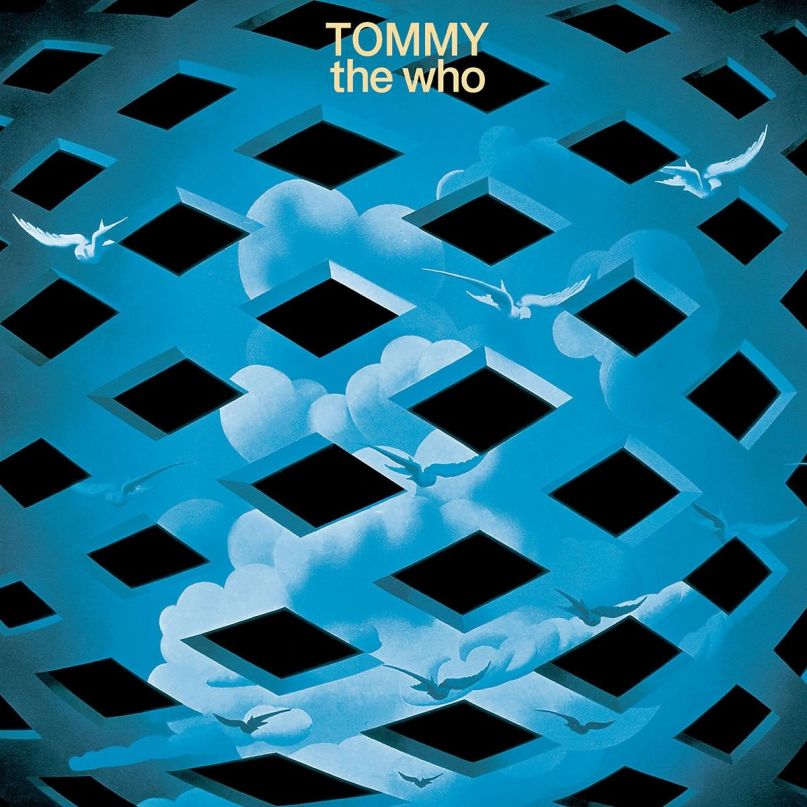 “Listen to Tommy with a candle burning, and you’ll see your entire future.” — Almost Famous

I don’t know how my sister Hilary got into The Who’s Tommy. All I remember is that as teenagers, we played the cassette endlessly. We never lit candles, but when I first started collecting vinyl, Tommy was the first album I bought. It had to be special, after all, this introductory foray.

(Buy: Tickets to Upcoming Who Shows)

Inspired by the teachings of Indian spiritualist Meher Baba, who focused on love and compassion, guitarist Pete Townhsend, desperate to do something beyond the standard three-minute pop song, came up with the concept of doing an album that would work as a recording, but was designed to be performed live. Right from the opening “Overture”, you know you are in for something far more expansive than a soundtrack and far more immersive than a rock album. Even in the studio recordings, there is a real sense that you are simultaneously present to something raw and untamed — Townshend’s vocals on the front half of the album sell this more than Roger Daltrey’s more refined intimacy on the back end — but also something well-conceived and thoughtful. Though hailed as a masterpiece early on, the album was later criticized for the thin nature of the narrative.

Bullshit, I say. Tommy is and was and shall ever be a pure and immortal classic.

(Read: The Who’s Setlists by the Numbers)

Tommy has an incredible economy when it comes to lyrics, able to convey so much in so little. Over deceptively simple guitar work, you get lines that set everything awful in motion – “Captain Walker didn’t come home/ His unborn child will never know him/ Believe him missing with a number of men/ Don’t expect to see him again,” four lines as sparse and telling as a wartime telegram. A few lines and a new melody later, we learn that the unborn child is a boy, the titular Tommy.

And then it gets wild.

With heartbreaking harmonies, “1921” sets up Tommy’s Greek-tragedy prognosis as he witnesses Tommy’s father, Captain Walker, return and murder the lover taken by Tommy’s mother. It’s underrated as a love song; “Somehow when you smile, I could brave bad weather” is wedding vow-level romantic.

There’s a lot of heavy lifting for Roger Daltrey as a vocalist here, singing mainly as The Mother, but also The Hawker and, later, Adult Tommy. Townshend and Daltrey duet on “Go to the Mirror!”, Daltrey alternately lamenting and hopeful as the heartsick Mother while Townsend, as Tommy, pleads the immortal words: “See me, feel me, touch me, heal me.” But her frustration grows across “Tommy Can You Hear Me?” until Townshend is just a fading repetition of his name, and then Keith Moon’s drums and John Entwistle’s rock-heavy bass slam us into “Smash the Mirror”, each laying out the summering drama in under two minutes.

But the rest of the band pitches in too. John Entwistle lends his thin, high vocals to “Cousin Kevin” and “Fiddle About” (which he also wrote), two of the most terrifying pop songs ever written. Entwistle’s dead delivery on “Cousin Kevin” runs in counter to the pervy mania of “Fiddle About” (a role Keith Moon took on with an unmatched abandon), but both put a horrifying pallor of trauma over the second and third acts. I didn’t pay much attention to this when I was listening to it as a child, but recent listening has made my mind race as I imagine every torture this poor child went through, unable to do anything but hope someone intervened, which, of course, they never did.

The immortal “Pinball Wizard” is, of course, the song that everyone knows, a power-pop song of the highest order. But it’s not the only song structured as such; “Sally Simpson” lays out a story narrative of one of Tommy’s biggest fans against high-wire guitars that spell both delight and danger for the titular heroine. My dad always pointed out this song for its use of the word “rostrum,” a word he doesn’t believe has ever been used in another pop song. It really does have something for everyone!

“Welcome” is the only weak song; the gentle, mystic guitars give way to increasingly frantic chords and a harmonica that lay the foundation for Tommy’s cult, but it serves more as a bridge function than as a rock song, violating the stand-alone principle that the majority of the songs set forward. It ends with a gently whispered “welcome” in direct contrast to the sinister repetition of the word that follows the truly insane return of Uncle Ernie on “Tommy’s Holiday Camp”. The final song, “We’re Not Gonna Take It”, is everything the fourth act has built to, an absolutely perfect piece of musical theater playoff. The fourth act holds together better than any of the others, wire tight.  And, of course, it all comes back around to those same eight words: “See me, feel me, touch me, heal me.”

Because at its core, the album is themed around our inability to communicate, what we are all deaf, mute, and blind to. We are all blocked to plenty, to our loved ones, to kindness, to love. Too often, we fail to speak as often as we fail to hear; we fail to see, and we are hurt when we are not seen.

There really isn’t anything quite like Tommy. The Who tried again with Quadrophenia in 1973, which has it’s own merits, but the closest anyone has come since would likely be John Cameron Mitchell’s Hedwig and the Angry Inch, in terms of raw musical power, themes of identity and loss, of hubris and acceptance.

It’s also easy to forget about Tommy. There’s really only one major hit, and a lot of the songs are short and tied to a narrative. It’s not an album you can listen to in bits and pieces, and as our listening habits get increasingly fractured, we forget that albums were once meant to be played in full and with rapt attention paid to every note. I fell victim to this as well. If I listened to Tommy a handful of times in my 20s, I’d be surprised.

But one afternoon this spring, as I was organizing my vinyl, I found the copy I bought more than a decade ago with the promise that one day I would have a system to play it on. So I did. And from the first glorious note of the overture to the final fading strains of Daltrey’s voice, I remembered every line, every precise chord, now richer and deeper on a vinyl pressing older than I am. Because that’s what it means to be immortal. Tommy gets inside you in a way that so many other albums can’t. The imagery of a blind boy racking up points at the pinball table, of a fallen savior and his false followers, of a woman driven to madness by a need for her son’s show of love. Whether we’ve seen it on stage or on film or not at all, these are all images we can conjure in our heads as the music swells.

You don’t need a candle burning to enjoy Tommy. But it never hurts to take a peek into your future.