More than 20 years in the making, the legendary metal act's fourth home video is on the way 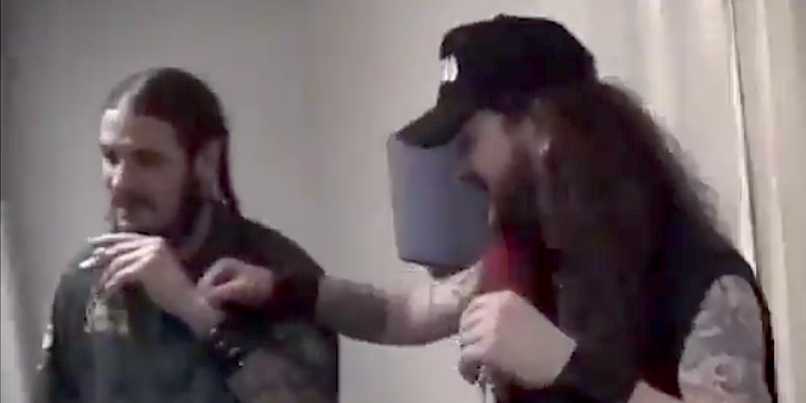 It’s been more than 20 years since the last Pantera home video was released, but a new teaser released on social media yesterday (April 21st) announced that the fourth in a series of home videos will arrive “at some point in the future.”

A tweet on the band’s official account shows a video clip featuring the band goofing around backstage and trashing a hotel room, along with fans in line to see a show. It’s accompanied by the words, “Preview clip of Pantera Home Video 4. Not sure when it will be released but definitely at some point in the future” (watch below).

During the band’s most successful years, Pantera released three home videos — 1991’s Cowboys From Hell: The Videos, 1993’s Vulgar Video, and 1997’s 3 Watch It Go. Each mixed together the promotional videos the band made at the time with live performance footage and material filmed on tour and in the studio. All three were eventually compiled together for the DVD release 3 Vulgar Videos From Hell.

Beyond that one minute clip included with the tweet, there’s no telling what else this future video will include. But according to Rita Haney, the longtime partner of late Pantera guitarist Dimebag Darrell, there is a lot of material to choose from.

As she told the podcast Talk Toomey in 2017, “You have to think, after Far Beyond Driven, there was still, like, four huge two-year tours…So there is more than enough for more than one volume.”

Bonus 420! Preview clip of Pantera Home Video 4. Not sure when it will be released but definitely at some point in the future. #pantera #420 #panterahomevideo4 pic.twitter.com/IEWTHIByol

The new home video would be yet another step in keep Pantera’s legacy alive for their longtime fans and modern audiences. In recent months that has included the “Tones From Hell” collection for the Amplitude iOS app that, according to the promo copy, “precisely models the exact gear used by Dime to record Pantera’s Cowboys From Hell album, on a device you can carry with you anywhere.” In addition, the band recently released a special 4/20 themed t-shirt, and has reissued much of their discography on 180 gram vinyl.

[See Also: 27 Years Ago, Pantera Take Metal to a New Level with Vulgar Display of Power]

Pantera disbanded in 2003, and, sadly, drummer Vinnie Paul died in 2018 from a heart condition, leaving Philip Anselmo and Rex Brown as the only surviving members of the band’s classic lineup.