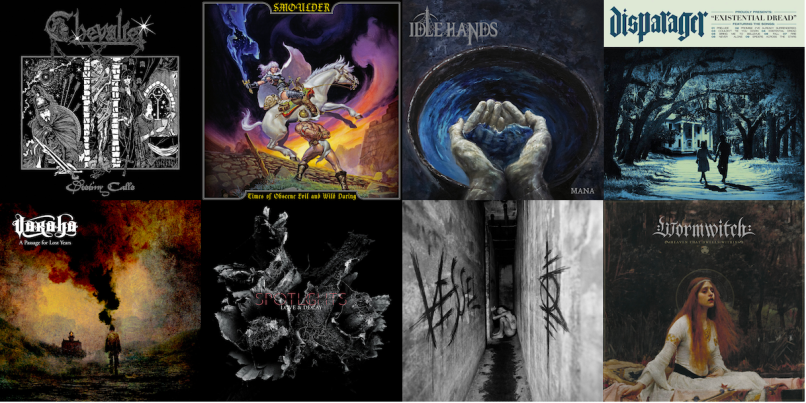 “Mining Metal” is a new monthly column from Heavy Consequence fixating on noteworthy new music emerging from the non-mainstream metal scene, focusing on releases from small and independent labels — or even releases from unsigned acts.

Since Black Sabbath released their self-titled debut album in 1970, metal has grown to encapsulate a wide variety of sounds that, in some cases, haven’t become part of the genre’s mainstream commercial arm. This column isn’t about praising one style of metal over another. It’s about bringing those hidden gems to the surface for wider consideration.

We anticipate it will be a strange and stimulating journey, one that will absolutely reward patience and open-mindedness. It might get dark, it might get weird — and it will definitely get loud. This is Mining Metal.

It’s easy to forget sometimes just how satisfying a nice lo-fi slab of speed metal can be. Chevalier’s debut LP, Destiny Calls (purchase here), brings to mind those first magical Blind Guardian records before they became the massive juggernauts we know them as today. That same magic is present here, a nasty hybrid of thrash metal and traditional heavy metal. Chevalier’s feral approach slightly disobeys the metronome, as they deliver their songs with both a sense of old school Mercyful Fate-esque theatricality and the heft of early Manowar or Helloween. In a better world, Chevalier would be able to be called power metal and that would be that hewing as close as they do to that early ’80s proto-power mold as they do, but alas, the term has other connotations these days that do not particularly apply to this group. Chevalier offer a test on Destiny Calls: Do you love heavy metal? Do you love it more than you love life? If so: you’re gonna get a kick out of this one. Prepare to chuck chairs through windows thrashing like a maniac and clutching invisible oranges in your living room.  — Langdon Hickman

The briefest possible description for Disparager’s self-released debut album, Existential Dread (purchase here), would be melodic metallic hardcore with post-rock elements, which is a bit of a mouthful but paints the contours of the record as completely as brief genre descriptions can. In terms of bands comparable to the Deftones, Disparager seem a great deal closer than Spotlights [see below], especially in terms of mirroring the core influences of that legendary group, if not precisely mirroring the precise execution of them. Disparager are fans of those wide voiced six-note guitar chords that the more satisfying hardcore bands use, the ones that offer that slightly jazzy melodic slash to cut through the post-hardcore and howled vocals. There’s a fair bit of screamo and alternative rock on the album too, making it a sampler platter of post-hardcore sonic styles. The group pulls them off, feeling at times in the same league as Oathbreaker and Deafheaven for metallic post-hardcore emotional heavy lifting. There are moments where the songs seem to meander, but it’s not hard to imagine this band producing a heavy hitter in the years to come, and the songs here are no slouch while we wait.  — Langdon Hickman

Idle Hands – Mana (Exclusive Premiere of “Dragon, Why Do You Cry”)

In case Chevalier above wasn’t enough of an indication, let’s be forthright: the Mining Metal team likes traditional heavy metal. Guitar solos, melodic singing, verse-chorus-verse structure, the whole kit and caboodle. Fortunately for us, the style is ascendant in popularity after more than a decade relegated to the ultra-niche areas of the internet. Portland, Oregon, act Idle Hands play traditional heavy metal to a certain extent, but they strongly infuse it with a gothic rock flavor on their full-length debut, Mana (purchase here). Singer and guitarist Gabriel Franco sounds more like Robert Smith than he does Bruce Dickinson, even though one can hear The Cure and Iron Maiden both in his band’s sound, as is evidenced by the song “Dragon, Why Do You Cry”, premiering below. Mana will be released on May 10 via Eisenwald Records. — Joseph Schafer

Let’s say there are two types of bands inspired by Black Sabbath: the kind that love Ozzy Osbourne’s drugged out “Sweet Leaf”, and the kind that like Ronny James Dio’s epic “Sign of the Southern Cross.” OK, there’s way more than two types of bands that mine that creative vein, but the point is, Toronto’s Smoulder are the latter. On their debut album Times of Obscene Evil and Daring (purchase here), the band draws lyrically and visually from the seminal fantasy of Michael Moorcock and others but still offers much to less geek-inclined listeners. The band exhibits a formidable command of melody, and their songs never drag on too long — a common pitfall in his type of music. Bands like Smoulder live and die by their vocalists, and singer Sarah Ann’s pipes prove as formidable and heroic as the triumphant champion on the album’s cover. — Joseph Schafer

Seeing the recent Deafheaven / Baroness / Zeal & Ardor tour hammered home a point to me recently. There is a great deal of music being made right now that is not precisely heavy metal music but is nonetheless heavy and, at times, metal; what matters for it in terms of internal characteristics is its inventiveness and adventurousness, which then is combined at times with metal-as-we-know-it to make whatever new object the band in question is crafting. This same idiom holds true for Spotlights, a band that is at once too dreamy and light and rock-oriented to feel even like post-metal while being at times too heavy and crushing to comfortably be called a rock band. Love & Decay (purchase here) pushes their heavy, dreamy shoegaze approach once more, landing heavier than similar line riders Nothing, but retaining that same level of euphoria. It’s not uncommon to see this group in general and this record in specific compared to Deftones, but that feels misleading; both bands deal with the resolutely heavy and the atmospheric and dream-laced, certainly, but they have distinctive phenomenological affects or, in more normal-people terms, the feeling inside the songs is different even if the parts are the same.  — Langdon Hickman

On their debut album, Seattle’s Theories delivered and inventive and blistering collection of truncated barrages in the vein of Nasum. Their delivery remains fast and lethal on their sophomore LP, Vessel (purchase here) but the addition of a second guitarist has made their songs longer — think eight songs as opposed to eighteen — and altogether darker. The churning album highlight “Lamprey”, for example, sounds like it’s been left simmering in toxic waste for weeks. The songs never get too lugubrious thanks to drummer Joe Axler, formerly of Samothrace, Skarp and Book of Black Earth, who plays with blistering speed and precision only found in the most extreme metal circles. — Joseph Schafer

Varaha – A Passage for Lost Years

Metal bands specializing in the slow and morose are dime a dozen. Too often these acts focus so much thick guitar tone that they forget to write passages that are memorable or beautiful. On their debut album, A Passage for Lost Years (purchase here), Chicago’s Varaha really emphasize the beautiful part, at times drifting into shoegaze territory or pastoral progressive rock — even the four orchestral interludes prove compelling, rather than throwaway interstitial material. There’s so much to digest that A Passage for Lost Years rewards repeat listening in a way streaming-era records rarely do. — Joseph Schafer

Wormwitch – Heaven That Dwells Within

I will break my standard decorum and speak in the first-person momentarily. I don’t typically like melodic death metal, an affect I’ve learned over time is more a statement of my taste than the quality of the music. Certainly, there are a few groups and records that I adore (At the Gates and Carcass being the obvious and universal ones) but, by and large, that particular bug hasn’t really bitten me. So it was with great delight that I heard Wormwitch’s new album, Heaven That Dwells Within (purchase here), take a nastier approach, interlacing quite a bit of black metal and crust punk to give the songs a bit of that meaner, gnarlier edge that I typically crave within (non-prog/tech) death metal. At times, the band thrusts with the kind of fervor you would expect from Goatwhore, who have a likewise blackened, nasty but very rock ‘n’ roll approach to death metal. The songs don’t do a great deal to differentiate themselves from each other, but it’s also easy to get the sense that the group isn’t particularly concerned with that; the album is devoid of epic statements or grandiloquent overarching concepts, driving home the idea that what matters to Wormwitch is crooked and driving heavy metal. On that mark, gothic melodic/harmonic flourishes included calling to mind the more joyfully heavy moments of Cradle of Filth, Wormwitch deliver a solid and satisfying record. — Langdon Hickman