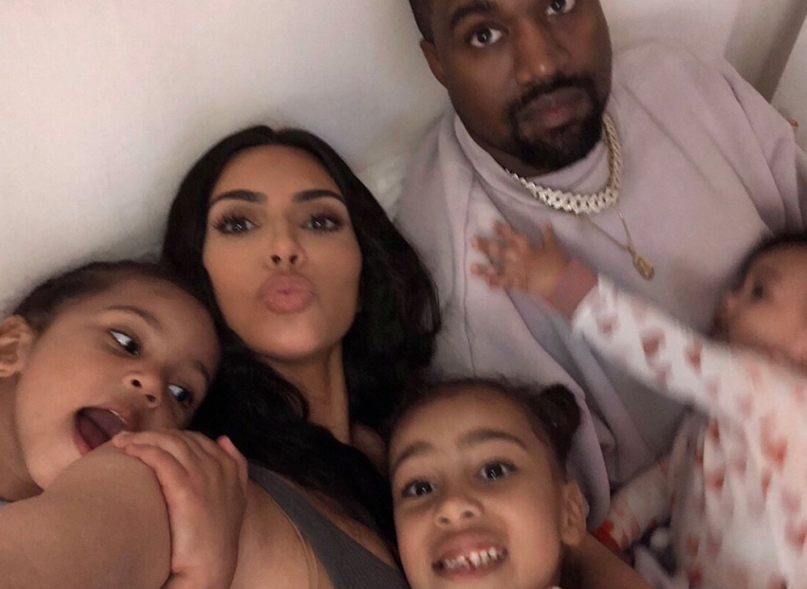 Kanye West, Kim Kardashian, and their kids, photo via Instagram

April Fool’s Day has been mostly unsuccessful this year, with pranks ranging from the weird to the downright dumb. We saw Tool release a “new song” that turned out to be 30 minutes of just cricket noises. Meanwhile, Justin Bieber tried to fool people into thinking that he and his wife Hailey Baldwin were expecting their first child (maybe he should take a hiatus on jokes, too?).

The Kanye West and Kim Kardashian West household didn’t seem to fare that much better on April 1st, thanks to a strangely morbid prank orchestrated by their kids.

In an interview with Elle today, Kim recounted how children North and Saint tried to make her look dead by spreading ketchup all over her body. North then taught Saint how to “fake-cry” and yell “Mommy’s dead!” in order to freak out dad Kanye. It worked to a certain extent, but mainly left the ye rapper displeased:

Kanye ran upstairs and he was like, “Kids, this is not funny. This is not a good prank.” I completely understand and I agree. But it did make me a little impressed that they planned something together, and they were getting along and having fun as a team.

Kids will be kids, but it’s not hard to understand Kanye’s reaction. If you’ll recall, Kim had a pretty harrowing, near-fatal experience in 2016, when she was robbed at gunpoint at a hotel in Paris. Upon hearing the news, Kanye abruptly ended his set at New York’s Meadow Music Festival to fly out to France.

She [North] roped him [Saint] into an April Fool’s prank yesterday that was ridiculous. She took ketchup into my bathroom, and she begged me to let her spread it on me, and on the bathroom, as if it was like a bad scary movie. Then she asked me to lie down. I thought she was just playing, maybe that she was going to say I was hurt. No. She taught Saint how to fake-cry—she showed him how to do it!—and then she told him to scream “Mommy’s dead!” Kanye ran upstairs and he was like, “Kids, this is not funny. This is not a good prank.” I completely understand and I agree. But it did make me a little impressed that they planned something together, and they were getting along and having fun as a team.

Kanye is expected to bring his Sunday Service to Coachella. The widely anticipated event, which sees him performing gospel renditions of his catalog with special guests, goes down weekend two of the festival, aptly on Easter Sunday. Tickets are still available here. To get hyped, purchase Kanye’s releases on vinyl here.