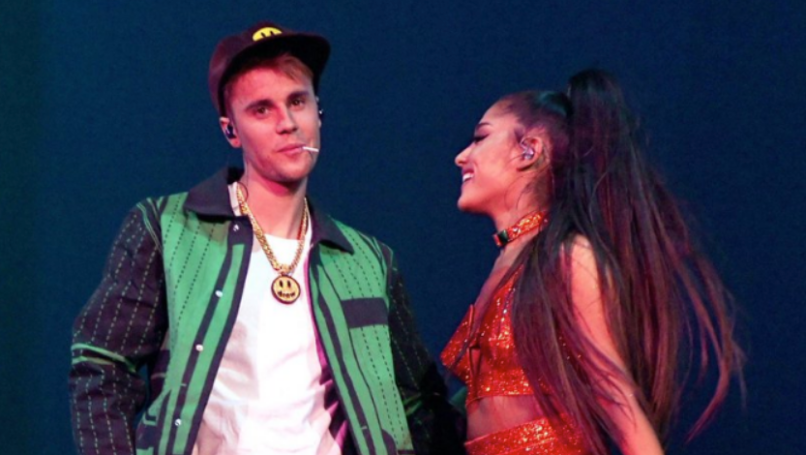 It was just last month that Justin Bieber seemed to insinuate that he would be taking a lengthy break from music in order to focus on “repairing some of the deep rooted issues that I have.” However, on Sunday the 25-year-old pop star made a surprise appearance at Coachella, where he joined Ariana Grande on stage for “Sorry”. What’s more, Bieber told the crowd that his new album was “coming soon.”

Bieber’s appearance came towards the end of Grande’s weekend two headlining set, and by all accounts it was not planned. “I haven’t been on stage in two years — I came out here, I had no idea I was going to be on stage tonight,” Bieber explained to the audience. Grande seemed to confirm as much, adding, “True story!”

That may explain why Bieber was so woefully ill-prepared for the performance, which wasn’t much of a performance at all. His lip-synced along to a crisp, studio version of “Sorry”, and he was noticeably offbeat throughout. As you can see via the video clips below, there were several instances in which Beiber dropped his microphone before completing his vocals.

Nevertheless, Bieber seemed pleased with his appearance, telling the crowd: “This is my first time on stage in two years. I had to get my groove back, I had to get my swag back.”

Ariana Grande brought out Justin Bieber and then he announced a new album on the way pic.twitter.com/xn8KyUO2Jv

AFTER 2 YEARS JUSTIN IS PERFORMING WITH ARIANA AND HE JUST ANNOUNCED A NEW ALBUM IS COMING SOON THE TEARS ARE REAL YALL I'M FCKN SHAKING RIGHT NOW pic.twitter.com/KadA02LaLS