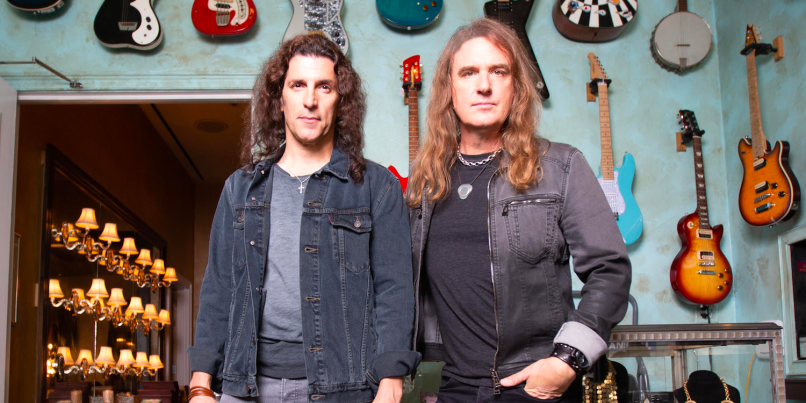 Frank Bello and David Ellefson have made their mark in two of the Big 4 thrash bands — Anthrax and Megadeth, respectively — but with Altitudes & Attitude, the metal veterans explore their rock side, playing songs that are melodic yet still aggressive.

Having released an EP back in 2014, it was a long road for the duo to unleash their debut full-length album, Get It Out, which arrived in January of this year. While the music had been completed for a while, commitments to their main bands didn’t allow a window to release the LP until this year.

The band kicks off a brief run of shows in the Midwest tonight (April 2nd) in Madison, Wisconsin, and we recently caught up with both Bello and Ellefson to discuss the new album, including the latest single, “Part of Me”, and what to expect at their upcoming shows (dates below).

Read our interview with Bello and Ellefson below, and pick up the debut Altitudes & Attitude album, Get It Out, at this location.

Frank Bello: Saying it’s been a “long time coming” is kind — just trying to weave in and out of there studio and get together and write together and just record, going back and forth to [producer] Jay Rustin’s place, his studio in L.A. Let’s face it, we’ve both been busy. We actually wanted to release it last year. But in retrospect, I’m kinda glad we didn’t, because a song like “Late” came in later on. So, I’m kinda happy the way it worked out. It just so happened … there wasn’t an open window to release it. But, it’s all meant to be like this. The songs are as fresh as ever. Just playing all these songs after doing the studio thing is a different animal. And they come to life even more.

DE: We started working on this back when we put that first EP out in 2014, so I guess we started with this in 2013, when we started laying down the initial song ideas. We had so much fun doing it. It was a really creative outlet for us, that we just kept working on it for these last four years, and really, the album had been wrapped up in early 2018. Frank got really busy with Anthrax playing on the Slayer farewell tour, and before Megadeth got busy on a [new album], we found this window to put the record out. The good news is that the songs have remained timeless. It didn’t feel like we had this album that was dated or sounded aging as we were making it.

On the musical direction and influences of Altitudes & Attitude

FB: I appreciate that the feedback that we’re getting is so positive. People are open to it — and that’s really all I can ask for. It’s not a metal record. People know David and I from our bands, being thrash metal and all that. We’re honest just saying, “This is a rock record.” We grew up on rock ’n’ roll. That’s the bottom line. So, our influences, from the late ‘70s, you gotta think KISS, Boston, Zeppelin, Cheap Trick — people hear a lot of Cheap Trick in Altitudes & Attitude. Other people hear different influences, which I appreciate. You can’t write something that’s not in you. Those were my influences, and they went a long way for me when I grew up. With all the hardships I had growing up — my dad took off — all that stuff that family’s go through, music was a very important thing to me.

DE: It’s got some heavier, harder-edged stuff on it, probably the [songs] that I started. What I liked with what Frank was bringing in were these really great three-minute singer-songwriter kind-of songs. They have everything from this acoustic Storytellers kind of vibe, all the way to Cheap Trick. And you can hear our classic rock influences from KISS, Cheap Trick, ’70s rock stuff, but then, of course, it also sounds very modern. We refer to it as “modern classic.”

Look, I don’t assume that I’m any kind of great singer. I just want to fit the songs. It’s a learning process. It’s just a big compliment for me to hear that people like the sound of my voice. It’s like another instrument, like guitar or bass. It’s just getting the song that you have inside of you out — the best way I knew how to do it. I just felt like it just comes pouring out of me, straight from inside of me to the microphone.

I study with a great vocal teacher in New York, who teaches me how to breathe and all that good stuff — just to keep the energy going to really use whatever voice I have. Again, it’s a learning process, but I’m grateful that people are digging it.

On the title track, “Get It Out”

FB: I write a lot of stuff in my living room with the TV on mute, and it’s either an acoustic or an electric guitar. I have a small amp right next to my lounge chair, and when my wife and son go to sleep, that’s what I do. It’s so ridiculous but it really works for me. That riff [on “Get It Out”] just kept sticking. I was just screwing around one day, and it just kept building. That song almost has a punk-rock kind of vibe.

And then lyrically, honestly, this Altitudes & Attitude project is something I wanted to do for a long time something different than people know me for, so it reflects on both David and I, having something you’ve held in for so long and getting it out of you — in a good way. And it really opens up the record nicely. I think it makes a statement for the rest of the record.

DE: Frank brought that riff in, and we quickly developed it into a tune. I love that frantic rock energy. Frank and I have been playing thrash metal in two of the best thrash metal bands for over 35 years, and it’s fun to have a moment that might be illegal in your main band, but it’s perfectly legal in a new setting. We found out years ago with Megadeth that we can’t branch out too far. When it says “Megadeth” on it, it needs to have a certain sound and a certain style, and we found that to be a good thing. But as writers, we’re always constantly exploring and coming up with new things, and it’s nice with something like Altitudes & Attitude, we have a home where we can actually help those ideas fully materialize.

On the song “Late” featuring the legendary Ace Frehley on guitar

FB: That came in later on … on an acoustic guitar, sitting in the same living room. One piece led into another piece that led into another piece. I had the whole song ready musically — and I couldn’t believe that I was on tour for so long, that my son grew a half an inch. I’m like, my god, I’ve missed so much. And it’s just about taking advantage of what you have now. You better enjoy life now, because before you know it, it’s gonna be too late — because you can’t get those moments back. It’s not just about your kid growing up, it’s everything in life. It’s part of the lyrics: “What you see in life / Gone before it’s time.” Never say, “I should have” — go for it now.

DE: Now we can officially, say, “Ace Frehley on guitar!” — like KISS Alive. Frank brought that in on guitar, and it was a nice dirty guitar. When Frank sits and plays guitar, it’s very comprehendible, and that makes a nice platform for me to play bass to, because it allows me to play more of a melody on the bass. My theory as a bass player is that when the guitars are complex, keep the bass simple, but when the guitars are simple, the bass can get busy.

FB: Dave Ellefson came up with a great musical piece for “Part of Me”, and he had a lot of that music written. I just added some guitar parts in later. The lyrics are about being in a place where you want to express yourself, whatever that may in your life. Don’t be held down by anything. I have this part of me that … I certainly have an inner anger, a part of me that I don’t want to let out, but if you keep pushing me, it’s gonna come out. I think everybody’s got that in them.

DE: That was a song that I brought in — I think it was originally a guitar idea that I had, but we had an 8-string bass in the studio, and we plugged it into a Kemper [amp], and just the tone of that thing, I just started writing parts left and right. So I started writing bits and parts for “Part of Me”. Frank helped me finish up the lyric idea, and it became that song.

On what to expect from the Altitudes & Attitude live shows

FB: There won’t be any songs from our main bands [Anthrax or Megadeth] but we will throw some covers in, ‘cause you can’t forget where you came from. So, we are gonna play some tributes to some of the bands we like, and a lot of people will have fun with that. If you know David and I, what we grew up, we put some fun stuff together. I love throwing those songs in. We can go left field and bring something out of the blue. I remember, for no reason at all at a show in Chicago, I started playing U2’s “Bad”, and we did a good piece of that song, and the crowd loved it. It’s all about energy. I want people to forget their problems when they’re at our show.