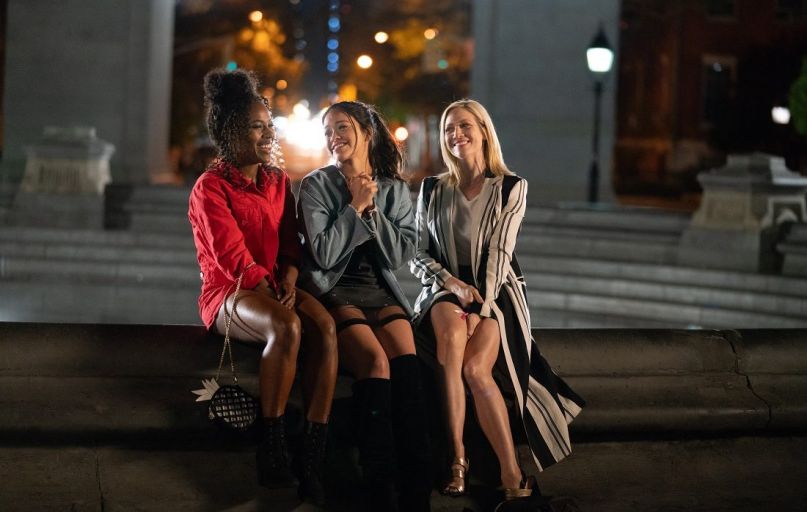 The Pitch: Netflix’s endearing new film Someone Great isn’t exactly a romantic comedy, although that’s how writer/director Jennifer Kaytin Robinson has described it. (This is Robinson’s feature debut, after previously creating MTV’s beloved but short-lived series Sweet/Vicious.) If anything, Someone Great is a kind of reverse romantic comedy in that it centers on a breakup, not a meet cute. Ahead of an impending move to San Francisco for her dream job as a Rolling Stone music journalist, Jenny (Gina Rodriguez, who also produced the film) is dumped by her boyfriend of nine years Nate (Lakeith Stanfield). Gently spiraling, Jenny seeks solace in “one last epic day” in New York City with her longtime best friends Erin (DeWanda Wise) and Blair (Brittany Snow). What follows is an adventure in the style of the Apatow buddy comedy, as the trio seeks out booze, drugs, and hard-to-find tickets to New York’s Neon Classic music festival. It’s one last chance to relive their youthful glory days, before reluctantly moving out of their twenties and into the “real adulthood” of their 30s.

Adulting: Some might scoff at the idea that three people who’ve legally been adults for over a decade are just now embracing adulthood. But Someone Great does well at digging into late-twentysomething anxieties without infantilizing its leads. All three have successful careers and relatively put-together lives. They’re just a little bit trepidatious about stepping out of one phase of life and into the next. For commitment-phobic Erin, that means taking her relationship with her girlfriend to the next level. For perfection-minded Blair, that means accepting that her comfortable dynamic with her long-term boyfriend might be a little too comfortable.

It’s Jenny’s film, however, and her present-day shenanigans are intercut with flashbacks to key moments in her relationship with Nate. The earliest of these sometimes strain a bit too hard to conjure up cuteness, but the later scenes anchor the film with welcome dramatic weight and a characteristically fantastic performance from Rodriguez. Pulling from a devastating breakup in her own twenties, Robinson captures the raw pain of two people who’ve spent their entire adult lives together slowly realizing that as they’ve been growing up, they’ve also been growing apart. Jenny’s determination to attend Neon Classic is partially out of a desire to get some sort of closure with Nate, who’s also supposed to be there. Robinson uses the flashbacks to bring us along on Jenny’s internal journey, as she tries to figure out what she actually wants her happy ending to look like.

The Hitch: Unfortunately, that carefully crafted relationship arc only serves to make the looser present-day stuff feel especially undercooked. Rodriguez, Wise, and Snow are incredibly magnetic actors with a great deal of mutual chemistry, but Someone Great relies too heavily on their charisma to sell jokes that are often more fun than funny. The dialogue — much of which feels improvised, although it’s hard to say for sure — hangs in an unsatisfying middle ground between believable naturalism and tightly scripted humor. That’s also true of the film’s narrative structure, which relies on a series of quirky New York City vignettes that never coalesce into something greater than the sum of their parts. Rosario Dawson is bizarrely wasted in a brief appearance as Nate’s passive-aggressive sister. RuPaul fares better as elegant drug dealer (and possible clairvoyant) named Hype, who owns a fish tank full of baby sharks and several well-trained Chihuahuas — eccentric details that also feel like setups in need of punchlines. While it clocks in at a brisk 92 minutes, Someone Great often feels like it’s filling time with its kooky day players while ignoring richer thematic material elsewhere.

Squad Goals: One pitfall of the emergent genre of movies and TV shows using rom-com tropes to tell stories about female friendship (think the Pitch Perfect franchise or Freeform’s The Bold Type, which shares a lot of DNA with Someone Great) is that they’re sometimes a little too hesitant to move past simplistic “Yass bitch!” uplift into something more nuanced. It’s an understandable impulse, given the historic Hollywood trend of pitting female characters against each other or not putting them in scenes together at all. But in this case, it means that the complexity of Jenny, Erin, and Blair’s 10+ year friendship feels curiously underexplored in a film ostensibly centered around it. Instead we’re offered a “getting ready” montage, followed by an impromptu bodega karaoke session, followed by a “strutting into the club” sequence — all within the span of five minutes.

The Verdict: To make a great romantic comedy, you need a few key components. Stylish direction. Winning lead actors. Likable, lived-in characters. And some kind of unique angle on the well-trod genre at hand. Someone Great offers all of that and more, but it also proves that one of the most important and least appreciated aspects of a successful rom-com is a great script. Despite a few moments in which Someone Great edges towards that kind of sophistication, it’s mostly content to remain a loose, laid-back hangout comedy. That also situates it as a perfect case study in how making a rom-com feel effortless without losing narrative momentum is a lot harder than it looks.

If that seems like a harsh criticism, it’s only because Someone Great wants to be — and deserves to be — examined as a serious piece of filmmaking. Robinson brings real artistry to her feature debut, she and cinematographer Autumn Eakin favoring long takes that bring the audience along on characters’ physical and emotional journeys. The film’s most compelling shot takes place from Jenny’s point of view, as she looks longingly out a car window while a triptych of moments in her relationship with Nate unfold across a single city block. It calls to mind the “Ain’t No Sunshine” sequence from Notting Hill, and captures Robinson’s ability to work within a genre while elevating and expanding it at the same time. Someone Great is a solid debut for a promising young filmmaker, and a welcome addition to the ever-growing Netflix rom-com canon. Hopefully, it’s also the first step on the road to even bigger and better things for both.