Film Review: Hellboy Is a Shotgun Blast of Schlock and Monster Madness 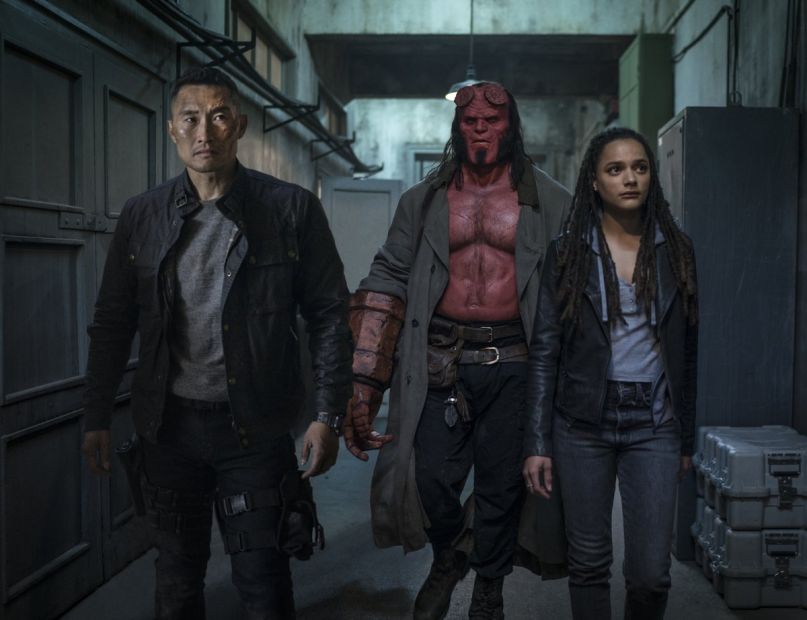 The Pitch: From the seeds of hell and the loins of Arthurian legend comes Perdition Lad. Sorry. Beelzebuddy. Okay, one more try: Hellboy. He’s horned and scorned, looking to dole out paranormal justice.

Lifted from the pages of Mike Mignola’s cult comics (and ostensibly a reboot of Guillermo Del Toro’s lauded but commercially middling films), Hellboy returns to the screen under the vision and viscera of The Descent’s Neil Marshall. This time, Hellboy himself is the product of squashed-face prosthesis glued atop the face of Stranger Things’ David Harbour. Think … Martin Riggs meets Barney Gumble, by way of Dante Alighieri?

Hellboy’s an agent of the B.P.R.D., the Bureau for Paranormal Research and Defense. They’re a band of G-men looking for ghoulies and other things going bump in the night, and Hellboy’s their all-star, despite being a prophesized harbinger of the end of days. Armed with a dad’s wit, a big right hand, and some even bigger guns, the Boy is Earth’s only hope of stopping Nimue (Milla Jovovich), a centuries-old witch queen. Something about plagues and bringing about the end of mankind. Standard B-movie stuff, delivered more garishly and comically than usual. And did we mention there are demons, goblins, giants, secret societies, other secret societies, witches, mediums (media?), a cheetah man, and a vampire luchador in addition to the Hell boy?

To Hell and Back Again: Here’s what we know. Mike Mignola, the creator of the Hellboy comics, was down with this adaptation. And comparatively speaking, this new take is far more Peter Jackson-esque and schlocky than Guillermo Del Toro’s imaginative but measured attempts. So it is sanctioned. And it is different. Whether or not it’s any good, well. Let’s dig in.

First and foremost, give the new Hellboy some credit. It has the stones to be gross, to be goofy. Hell, it’s even a little obnoxious. It’s grindhouse with room for gore and more. More blood, more guts, and a lot more hoary jokes (“It would never work! I’m a Capricorn and you’re fucking nuts!”). More flashbacks, big musical cues (Muse and Motley Crue, among others, propel the action), long takes, more locales in and out of our known dimension. A house on chicken legs. A side mission involving King Arthur’s sword. Thomas Haden Church as a G.I. killer of Nazis in black leather (in flashback, of course). And pixies. Wait, shape-shifters. No, an unholy union of both.

It’s a lot, but at least Hellboy is fleet, and keeps busy enough to never allow a real chance to scoff or question. Look on in bafflement at skin-ripping demons in London. Shudder at a baby-eating, spider-crawling, one-eyed grandma monster. Chuckle at the Hellboy’s drunken stint in Tijuana. And weirdly enough, all of it becomes fun after a while through the core chase narrative and asides for detective work. It’s the detective-and-rogues-gallery thing. It’s The Big Sleep with demon ladies, time warps, and a devil-horned Marlowe at the helm. Or better yet, given the attitude on display, it’s akin to an ‘80s beat cop flick with a ton of phantasmagorical lore on top.

But man alive, is there a ton of viscous, icky, and downright weird, uh, stuff, just to cover in one paragraph. Hellboy is extremely A) plot-heavy, B) gore-loaded, and C) no, seriously, this sucker is gross. And that’s the thing that will polarize audiences. How do you feel about 3D eyeball pops toward the camera? Or people’s souls being thwacked out of their bodies? Inserts of spraying blood and spear stabbings? But the brazen might turn into a katzenjammer for some before the end.

The reboot is less defined and far more ferocious than Del Toro’s 2004 take, because there’s a whole lot of blood-drenched spaghetti on the wall, and Marshall and crew never give themselves much of a chance to see what sticks. So viewer be warned: Your mileage may vary on the road to hell.

Harbouring Feelings: The Twitter memes kinda nailed it on this one. The make-up job on David Harbour makes him look like a pumpkin left out through April. His face is squashed, the eyes don’t really pop, and the false teeth give his speech a slurry delivery. Not to discredit the make-up team, but when the star character elicits head-tilts in confusion over exactly what you’re looking at, it’s not a great sign. And there’s tons of fun and rubbery stuff elsewhere in here, like a giant Georgia O’Keefe eye with floating hands that spits fire, or Gruagach (Stephen Graham), a man-warthog bully reminiscent of Bebop from the Ninja Turtles.

However, and this is a big however: Harbour has personality. He’s quite likable as the titular Boy. Call it old-fashioned praise, but with the right casting, Harbour could be a movie star in the everyman vein. He’s got confidence, but not intelligence. Also, the zingers help. He can deliver dumb punch-up lines like “the only thing worse than getting stabbed in the back is getting stabbed in the back” better than most big-screen papas. His candor, frumpiness, and big-boy gait still manage to leave an impression through the pounds of latex.

The Verdict: Hellboy’s a werewolf bar mitzvah. It’s in the vein of Cannon or New World Pictures, just creepin’ for a good time. And for those still looking for dignity, for the graceful ironies and clean form of Del Toro, heed this warning. Neil Marshall’s Hellboy is a monster mash, loud and proud. Just bring a mop.

And on a technical note, see it at a theater with bright projection. It is a dark and dimly-lit movie with 3D-friendly tendencies, an interesting trait given that it’s not being released in 3D.