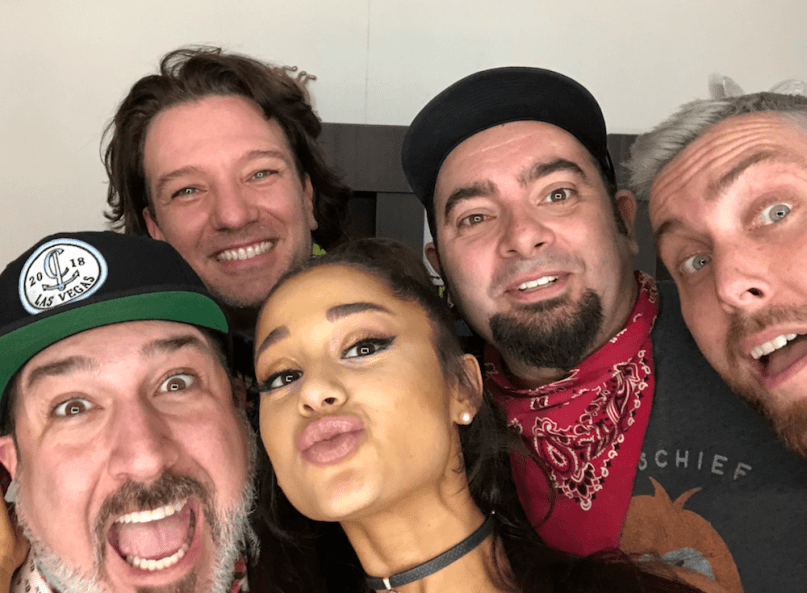 Ari brought JC Chasez, Joey Fatone, Lance Bass, and Chris Kirkpatrick back together for an *NSYNC (!) reunion. The singer, who sampled the boyband on her thank u, next  single “break up with your girlfriend, i’m bored”, had been teasing the appearance in the days leading up to the festival. On Instagram, she posted a clip of an *NSYNC pay-per-view concert from 1999 that actually cuts to a young Ari being held by her mother in the crowd. She followed it with another video showing her dancing to *NSYNC’s smash “Tearing Up My Heart” with the caption, “the best medicine 🖤 90s baby 🎧📹.”

Bringing out the ’90s heartthrobs was a choice potentially based on more than just her personal fandom, though. The group’s most popular member, Justin Timberlake, was forced to pull out of the Coachella headlining spot Grande eventually took after he rescheduled tour dates to deal with bruised vocal chords. Giving fans a chance to see the other members of *NSYNC was certainly a more than worthy recompense.

With the crowd roaring, Ari and the boy band rolled through “break up with your girlfriend, i’m bored”, in addition to *NSYNC’s smash single “Tearin’ Up My Heart”.

@ArianaGrande and @NSYNC live at #COACHELLA #ARICHELLA
this choreo is everything! pic.twitter.com/KFYLyOAJo2

Continuing with the guest-filled set, Ari later brought out frequent collaborator Nicki Minaj. The rapper’s appearance was almost expected; after all, the pair have teamed up for no fewer than five tracks, including smashes like “Side to Side” from Dangerous Woman and “Bed” from the rapper’s Queen. For the Sunday night performance, Minaj joined Grande for “Side to Side”, as well as “Bang Bang”, off Ari’s My Everything from 2014.

Unfortunately, this is also when the pop star was hit with multiple technical issues. At least twice Ari was seen yelling out “We can’t hear anything!” during their joint performance.

For more ’90s nostalgia, Ariana also had Diddy and Mase come up on stage to join her for a collaborative performance of the 1997 Notorious BIG single “Mo’ Money Mo Problems”. It served as a tribute not only to Biggie, but also to 2Pac and collaborator and ex-boyfriend Mac Miller.

#ARICHELLA: @ArianaGrande brings out @Diddy and Mase at #Coachella to perform ‘Mo Money Mo Problems’ as a tribute to Biggie, 2 Pac, and Mac Miller ❤️ pic.twitter.com/EIqnT878hx

At another point, Ari’s set included a recording of her cover of Frank Ocean’s “Close to You”. That same recording of the Blonde track has been played on her tour in the past.

Act 1
Raindrops (An Angel Cried)
God Is a Woman
Bad Idea
Break Up With Your Girlfriend, I’m Bored (with *NSYNC)
Tearin’ Up My Heart (*NSYNC cover) (with *NSYNC)

Act 4
The Light Is Coming
Into You

Encore:
Thank U, Next