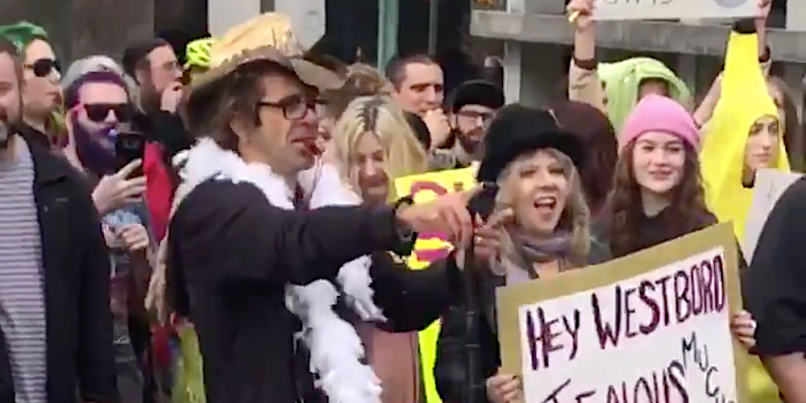 On Friday, Lamb of God frontman Randy Blythe announced that he was organizing a “counter-party” to combat the Westboro Baptist Church, who were hitting the the Virginia State Capitol building to protest the recent election of openly transgender delegate Danica Roem.

Well, it all went down this morning (March 11th), with Blythe bringing 200 kazoos to drown out the hate group, who, judging by video footage, were greatly outnumbered by Blythe and company.

Blythe danced around in a cowboy hat and boa as his merry band of counter-partiers pounded away on buckets, blew whistles, and rocked out on the aforementioned kazoos, all as the small contingent of Westboro Baptist Church dingbats looked on from across the street.

Danica Roem was recently elected into the Virginia House of Delegates as a member of the 13th district, becoming the first openly transgender person to serve in any U.S. state legislature.. Prior to being a politician, Roem was a member of the melodic death metal band Cab Ride Home.

The Westboro Baptist Church has protested LGBTQ causes, military funerals, Jews, Muslims, and more over the years. Four years ago, Foo Fighters trolled the organization by blasting Rick Astley’s “Never Gonna Give You Up” during one of the hate group’s protests.

Check out the various social media posts and news reports showing Blythe and his fellow Roem supporters in action this morning at the Virginia State Capitol building:

I somehow ended up up Randy Blythe’s protest against the Westboro Baptist Church ???? pic.twitter.com/CNbhwBAs2P

@hEnereyG hopefully this is a good start to your day. Randy Blythe from lamb of god organized a counter party to the Westboro Baptist Church today in Va. this is the result. pic.twitter.com/kN5MAcdkHG