TV Review: Arrested Development Finishes Off Season 5 With a Whimper

Netflix's revival grinds to a close, feeling more dated and wearier than ever 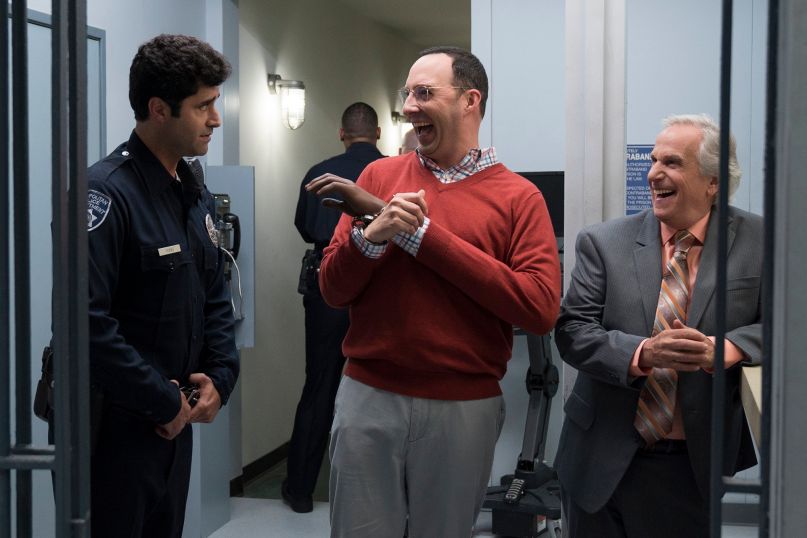 The Pitch: Following up on the events from the first half of the fifth season, the Bluth family finds itself in survival mode. Michael (Jason Bateman) is trying to wrestle back control of the Bluth company and regain his relationship with George Michael (Michael Cera), who himself is trying to get away from the fake tech company he created, Fakeblock; Buster (Tony Hale) escapes from prison with father Oscar (Jeffrey Tambor), going on the lam for the former’s suspected murder of Lucille Austero; George (Tambor) and Lucille (Jessica Walter) continue to work on their wall-building scam at the Southern border; Lindsay (Portia de Rossi) is busy with her Congressional campaign; Maeby (Alia Shawkat) is still disguising herself as an old woman to stay rent-free in a retirement community; and Gob (Will Arnett) is trying to get his magic career back after a trick (sorry, illusion) went wrong, rendering him gay in the public eye and leaving lover Tony Wonder (Ben Stiller) presumed dead.

I’ve Made a Huge Mistake: Can you believe it’s been a year since Netflix aired the first half of the fifth season? Showrunner Mitchell Hurwitz’s gamble to qualify Arrested Development’s fifth season for two separate Emmy seasons was as calculated as it was misguided; if the first half didn’t work, the second half surely wouldn’t. The same problems persist from the eight episodes we saw in 2018: the show and its characters have largely run out of steam, and many of their character conflicts feel like the millionth dip into the well of their respective neuroses. Michael is still a self-righteous manipulator, Gob an insecure sleaze, Buster a childlike buffoon, Tobias a repressed closet case. All of this has happened before, and all of this happens again. The cast is as sharp as ever — even the creakiest joke setups can be saved and delivered well by Arnett, Hale or Walter — but the show now just feels like it’s going through the motions.

The long wait between halves is equally baffling considering the labyrinthine, convoluted plot setups for which Arrested Development is known — if you haven’t rewatched the first eight episodes in a while, good luck remembering subplots such as Lucille’s romance with middle-aged beach bum Dusty (Dermot Mulroney) or the missing persons case surrounding Lucille 2’s death and peripheral characters like Lottie Dottie Da (Frances Conroy). Sure, Ron Howard is still around to explain them to you, but you’ll be forgiven for getting lost when episodes begin with significant time jumps and plot points being settled off-screen.

That Was a Freebie: Independent of the season jump, the Netflix revival of Arrested Development feels calcified in the mid-2000s sensibilities of its original run, gamely moving forward with its unique blend of long-form joke setups and absurdist wordplay. Granted, there are moments when these turns of phrase absolutely shine (Dusty, when asked if he served in Vietnam, replies “No, I surfed in Vietnam”), but it just feels like too much time has passed for even most fans to care. In 2019, expecting jokes about Trump University and the border wall to land with anything other than a concussive thud is hubris; the same goes for incredibly dated groaners about the gay mafia being run by a toe-tapping Argyle Austero (Tommy Tune) and subplots about ‘saving face’ with Chinese investors.

And yes, it bears repeating — it’s incredibly disquieting to see Tambor still in the mix after the fiasco surrounding his sexual harassment allegations and the PR shitshow that preceded the season’s first half. (Perhaps this is part of the reason why the second half is coming out to comparatively little fanfare.) He still has tremendous chops as both George Sr. and Oscar, but it’s eerie to see the lingering poltergeist of one of his most famous characters pop back onto Netflix screens nearly a year after the allegations came to light.

The Final Countdown: While we don’t know for sure that this is the final act for the Bluth family, season 5’s finale makes a strong case for closing the book on the Bluths for good. The final few episodes begin with flashbacks to a young Bluth family, where we see the origins of everything from Gob’s love of magic to Buster’s deepest demons. For the most part, each Bluth is maneuvered into a place of some kind of closure for their character, with a few moments of much-needed self-awareness along the way as to their collectively unscrupulous nature. Murder trials, mergers, and one last big illusion for Gob punctuate each character’s story, wrapping them up in messy-but-necessary ways.

The Verdict: The Bluths have never been perfect people, and Arrested Development has never been a perfect show. But the very premise of the show lends itself to a certain shelf life; we can only watch the same people make the same mistakes over and over again for so long, no matter how many new sight gags and puns are tacked on. However mediocre the Netflix revival of the show has been, it allowed some of the funniest people on television two more rounds at bat with their favorite characters, and maybe that’s enough for now. While season 5 returned to some of the ensemble joys missing from season 4, it’s still not enough to save the show from feeling deeply stale. As the California sun sets on the Bluth family’s story, it might well be time to hop on the stair car and drive off for grander climes, and even more sudden-er valleys.

Where’s It Playing? The fifth season of Arrested Development will burn off the rest of its episodes (and its remaining goodwill) on Netflix come Friday, March 15th.