Trent Reznor inducts The Cure into the Rock & Roll Hall of Fame: Watch 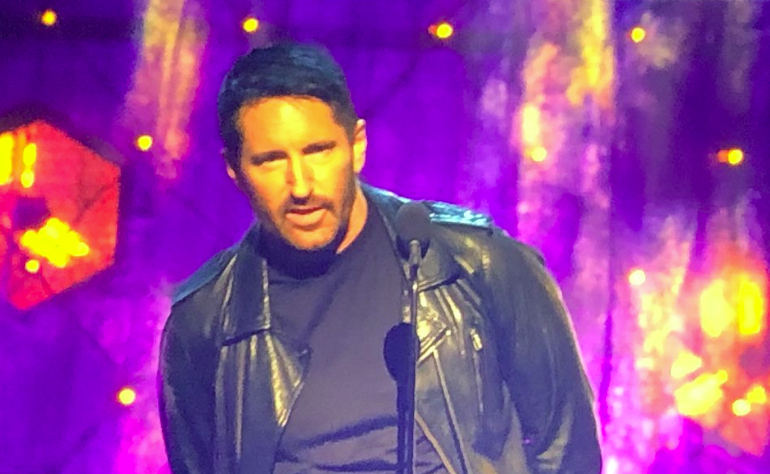 The 2019 class of the Rock & Roll Hall of Fame were inducted on Friday during a ceremony at Brooklyn’s Barclays Center. Among the seven prestigious inductees were new wave pioneers The Cure.

Despite his past feelings about the Hall of Fame, Nine Inch Nails’ Trent Reznor was tapped to formally induct the iconic English outfit. Reznor has been a fan of The Cure since he was 18, as he told The Quietus in an interview last year.

“The Cure were one of those bands that really struck a chord and Head On The Door is the album that made them really important to me,” said Reznor. “I got into that and then worked my way backwards. That album got me through a lot of long dark times. I felt that this Robert Smith guy really understood who I was and I loved The Cure from that point on.” 2018 saw Smith personally book Nine Inch Nails to play his Meltdown Festival.

In his induction speech, Reznor continued to shower praise on The Cure. “I struggled my whole life with feeling like I don’t fit in or belong anywhere — kind of like right now — and hearing this, suddenly I felt connected and no longer quite so alone in the world. Immediately this band struck a deep chord with me… A lot of darkness I felt in my head was coming back at me through the speakers… all of it anchored by one of the most exquisite instruments — Robert Smith’s voice.”

“The Cure have been in and out of fashion so many times over the past four decades, they’ve ended up transcending fashion itself,” Reznor said at another point.

“I’ve been, let’s say, ambivalent about certain award ceremonies… they’ll acknowledge X but they won’t even recognize The Cure. Then I got a call I wasn’t expecting and I’ve never been so happy to eat my words.”

The Cure’s Smith kept his comments brief, saying,  “It’s a very nice surprise to be inducted into the Rock and Roll Hall of Fame.” He then led his band through a five-song performance, which you can watch here.

According to frontman Robert Smith, The Cure have already begun working on their first album in 10 years. The band has also set its 30th anniversary “Disintergration” shows and is marked to headline major festivals like Glastonbury and Fuji Rock. Purchase tickets to their upcoming dates here.

Meanwhile, The Cure’s vast catalog of vinyl releases can be found here.

A transcription of Reznor’s full speech inducting The Cure:

Good evening. I’m Trent Reznor. Tonight we are here to give praise and respect to one of the most instantaneously recognizable and sonically unique rock bands of the 20th century. Tonight, the Cure enter the Rock & Roll Hall of Fame.

I grew up in a small town—small town USA, Mercer, Pennsylvania to be precise, where there was nothing to look at but cornfields. It was a primitive time, long before the miracle of the internet arrived to devalue our wonderful art form. Even pre-MTV, with nothing to listen to on the radio and nothing to do but dream and escape.

When I left home, it was time for the big city—in my case the big city of Cleveland. And everything changed. It was the mid-’80s, and just being able to tune into college radio made my head explode with limitless possibilities. This was my baptism into the world of alternative and underground music—the sounds that informed what Nine Inch Nails would eventually become.

One of the most important aspects of being swept away by this tidal wave of music was getting to hear the Cure for the first time. Immediately, this band struck a deep chord in me. The first album I heard was Head on the Door, and I hadn’t heard anything like it before. And a lot of darkness I felt in my head was coming back at me through the speakers and it blew my mind. It was like this music was written just for me. Now I’ve struggled my whole life feeling like I don’t fit or belong anywhere, kind of like right now. Hearing this, I suddenly felt connected and no longer quite so alone in the world. That’s one of the things I find so unique and special about the power of music.

It wasn’t just the sound or the words or the presentation—all of it was anchored by the most exquisite of instruments—Robert Smith’s voice. That voice, capable of such a range of emotion from an expression for rage, sorrow, and despair to beauty, frailty, and joy. It might sound naive but until I heard The Head on the Door, I just didn’t realize it was possible to write about such difficult and profound ideas, but do it in the context of successful songs that might even get played on the radio, challenging norms from the inside.

Anyway, I listened to that record nonstop until I wore the grooves off the vinyl and then I worked my way backwards. It was a rich and important back catalog waiting for me.

The group that would become The Cure formed in 1976 in the suburban English backwater of Crawley, a small town that all the members also dreamt of escaping from. They were four imaginary boys: Robert Smith, Lol Tolhurst, Michael Dempsey, and Pearl Thompson, who were energized both by the explosion of punk that was happening miles up the road in London and by the heavy psychedelic rock from America which they’d grown up loving.

After a few lineup changes and the creation of some timeless post-punk and new wave, the band entered 1980 as one of the groups who would come to define the music, the attitude, the look of the decade to come. Singer, guitarist, and songwriter Robert Smith, bassist Simon Gallup, and drummer Lol Tolhurst presided over a trio of classic albums—Seventeen Seconds, Faith, and Pornography—that would help to become what would be known as gothic or alternative rock.