Though searingly funny at times, the British satirist's latest struggles to match reality with comedy 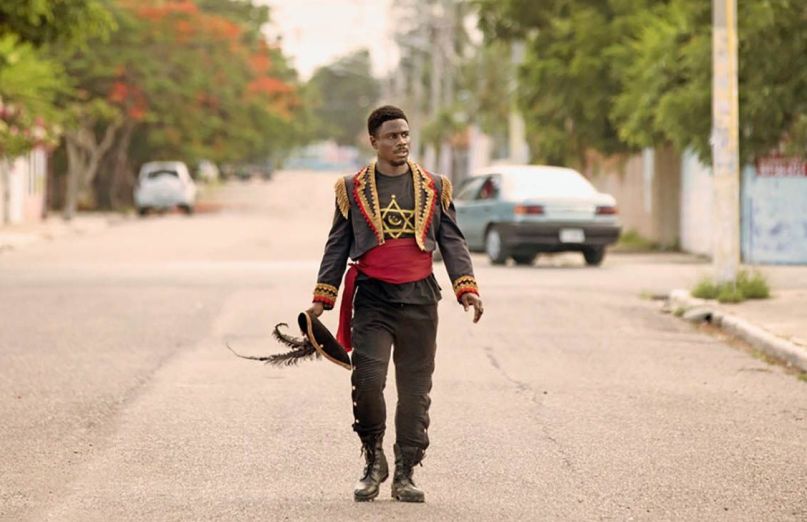 The Pitch: Moses (Marchánt Davis) is a would-be spiritual leader, overseeing a handful of bumbling followers who, as the Star of Six, practice sustainable farming, preach non-violence, and pray to Haitian revolutionary leader François-Dominique Toussaint Louverture. They’re not without their issues, however, as Moses is clearly delusional, naming a duck as his conduit to God and interpreting all coincidences as divine messages. Despite consisting of less than 10 people, his group has nevertheless caught the attention of the South Beach FBI, who are so desperate for a win that their desire to frame the Star of Six as a terrorist group inadvertently results in the group’s radicalization.

Really, Though, This Is A Comedy: But then, if you’ve seen Chris Morris‘ previous feature Four Lions or his work on Brass Eye, you already knew that. The British satirist, a frequent director on Armando Iannucci’s Veep, wields a searing, acerbic wit, and the absurdity of his storytelling is enhanced enormously by the white-hot delivery of his profane dialogue. There are traces of Four Lions’ DNA here, but that film’s dopey wannabe jihadists at least wanted to be terrorists.

Moses and his crew are reckless, sure, but they’re far more eccentric than dangerous. By highlighting the FBI’s role in their demonization, Morris adds texture to his absurd vision of the War on Terror, drawing upon his work with Iannucci to portray the government as filled with in-over-their-heads ladder-climbers way more concerned with how their arrests look on paper than how they might resonate in real life.

So, Yeah, It’s Also Kind of a Tragedy: There’s a fierce playfulness at work in Morris’ film, but it also ripples with a subtle cruelty, one that, despite the film’s humor, can’t help but feel laden with a low-key nihilism. Maybe that’s the point — this minuscule rabble doesn’t stand a chance against the weight and scope of the government — but there’s something deflating about the impending doom that slowly clouds Moses and his crew, especially once The Day Shall Come reaches, well, the day in question. The film’s simmering anger is invigorating, but carries doses of exasperation with it as well.

Spitting Fire: The Day Shall Come remains a riveting watch, though, if only for Morris’ deft, lightning-fast pace and the cast’s mastery of his language. Anna Kendrick, who here plays the only government agent with a dose of empathy, makes up for her general lack of character by flaunting every barb of Morris’ dialogue.

Playing her cold-as-ice boss is journeyman character actor Denis O’Hare, who emerges alongside Davis as the film’s MVP. O’Hare, an unassuming presence, emerges as the worst kind of bureaucrat, the kind of guy who’s becomes so desensitized to the impact of his work that he views the people he strains to apprehend as pawns on a chessboard, pieces he can position in whatever way best suits his strategy. The goal is winning, not justice.

Meanwhile, Davis exudes multitudes as Moses, layers that feel of a piece within his performance even if they don’t always congeal in the script. The young actor manages to exude a caring, sensitive nature that never conflicts with his delusions of grandeur; in his mind, he can simultaneously function as god, husband, friend, and father.

The Verdict: Morris’ brand of satire has always felt vital. Four Lions was a revelation in the way it mined satire and, ultimately, catharsis from the fallout of some of the world’s worst terrorist attacks. The Day Shall Come isn’t as brutally effective, but it’s refreshing to see a magnifying glass placed over bureaucratic processes that, by virtue of their looping circuitousness, allow actual criminals to run free in their pursuit of a Big Bad that grows more elusive by the day.

The problem is that the film’s humanity is often eclipsed by its big-picture message and satirical edge. That Morris is able to cull such rich, layered comedy from the topic speaks to the singularity of his vision, but one can nevertheless find themselves adrift in this particular batch of buffoons. After all, this kind of reality is only funny for so long.