SXSW Film Review: Logan Marshall-Green and Ethan Hawke Turn the Light On for Ex-Cons With Adopt a Highway 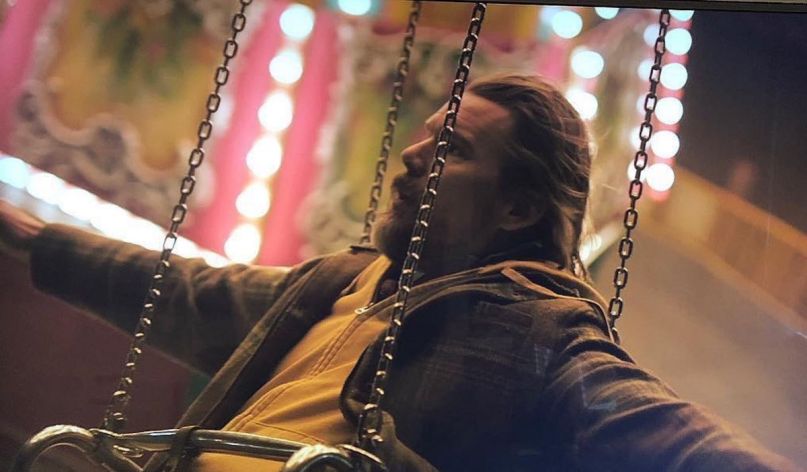 The Pitch: A California ex-convict (Ethan Hawke) is released to an entirely new world after being incarcerated for more than two decades. He doesn’t have a cell phone. He’s not hip to the Internet. He has very few resources. But he does have a job, working late nights at a local burger shop, where he shuffles to and from in lonely limbo using public transit. That all changes, however, when one night he stumbles upon a baby in a dumpster.

A Major Upgrade: Talk about a 180! After unconsciously kicking ass in last year’s South by Southwest genre hit Upgrade, Logan Marshall-Green returns to the festival with his feature-length debut as a filmmaker. Surprisingly, the razor-sharp 88-minute film shares less with any of his contemporaries and more with the festival’s hometown hero, Richard Linklater. Patient, meditative, and sanguine, Adopt a Highway is a rugged slice of Americana.

Yet also a forgotten one. As the film states at the very end of its credits, Highway is “for everyone who’s made a mistake,” specifically the ex-convicts who are continually marginalized and left behind by society, no different than the crying toddler in this film. Rather than stand up and decry these injustices, Marshall-Green paints a moving and effective portrait that speaks volumes in all its deafening moments of silence.

Rather wisely, Marshall-Green simply follows Hawke as he curiously interacts with the world around him, observing its range of quirks, novelties, and many walks of life. Often, it’s depressing. At times, it’s funny. Mostly, though, it’s achingly melancholic. After all, this is a movie about the abandoned, and Marshall-Green doesn’t pull his punches, giving you an ultra-sobering look at an America we often try to ignore.

Despite all this, Highway is never anything less than beautiful. Even amidst the film’s most harrowing moments, like when Hawke first discovers the colicing child, it’s hard not to marvel at the torrential thrusts of wind that roar over him like nature’s choir. This is meticulous filmmaking from Marshall-Green, who ably mines the toughest diamonds in the roughest roughs, which is a staggering feat to accomplish when coming right out of the gate.

But there’s a point to these dalliances of light, in that they tie into the film’s overall theme of hope. Marshall-Green wants to believe in second chances for people in Hawke’s onscreen shoes, and those glimpses are a reminder of those notions. But he earns that hope by never losing sight of the pending consequences that always surround us. It’s a tug-of-a-war, alright, but one that Marshall-Green nails with stunning ease.

Hawke’s Eye View: By now, a movie like Highway is old hat for a guy like Hawke. As the top student of the School of Linklater, Hawke can do this type of performance in his sleep, and we’d still stand up and applaud and say, “Oh yeah. That’s our Hawke.” But he doesn’t. There’s a distinct kind of effort in his turn here that’s brutally affecting, coming from a place that’s not too dissimilar from his career-best work in First Reformed.

The film rests on Hawke’s shoulders — Marshall-Green wrote it with the star in mind — and the veteran actor uses the weight of that responsibility to his advantage. This is a crippled character, a man broken by a system that chews and spits souls out without any regard, and you see the effects of that destructive disassociation in every one of his actions: the second guesses, the stunted responses, the turned-down eyes.

It’s a very physical performance for Hawke — transformative even, as he’s hardly recognizable — and he carries it all out with a great deal of humility. In fact, he’s almost unnerving to watch, if only because you really have no idea what he’ll do next, which is undoubtedly by design. We’re seeing him the way everyone else in that world sees him, and there’s a sinking feeling that comes with that realization, one that turns any of our anxieties into guilt.

Also Featuring Jason Isbell: Arguably, the only real co-star of the entire picture is Jason Isbell’s wandering six-string score. At the suggestion of Hawke, the Southern rocker carved out a chunk of music for Highway, and his work adds so much depth and dialogue to the scenery. Marshall-Green uses the score like a yo-yo, swinging it in and out of scenes for maximum effect, and by the end, it’s hard letting it roll back up.

Mr. Blum Builds His Blumhouse: As Dave Chapelle and Wu-Tang advised so many years ago, “diversify your bonds.” Clearly, Jason Blum is following suit. Highway marks a major left turn for the studio, even when you consider Whiplash among its catalogue, and it’s a great look for them.

There’s a reason for this, though: As Blum told everyone at the premiere, Blumhouse’s film output traditionally breaks down to 80% horror and 20% other. This one, however, came out of pure love. Why is any of this important? It’s not, exactly, but it’s good to applaud those breaking the norm.

The Verdict: Adopt a Highway does a number of things right. It keeps Marshall-Green in the director’s chair. It’s another win for Hawke. It shakes things up over at Blumhouse. But more importantly, it effectively tells a story that’s too often left to weathered letters, wilted postcards, and tossed-away pamphlets.

This is an American story that’s gone untold for too long, and at a swift 88 minutes, Marshall-Green lets everyone off easy. What’s more, he never comes off as treacly, pedantic, or self-righteous in his gestures. He simply leaves it all out on the table. How you feel as you walk away is on you.