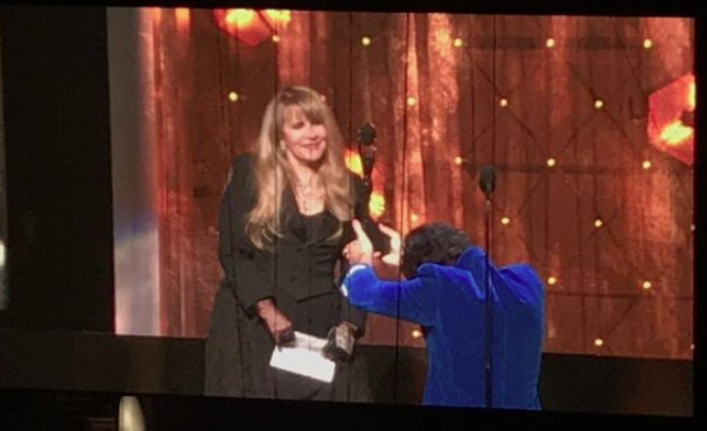 The 2019 class of the Rock & Roll Hall of Fame were inducted on Friday during a ceremony at Brooklyn’s Barclays Center. Among the seven inductees was Stevie Nicks, who makes history as being the first female artist to be inducted twice. After receiving the honors in 1998 with Fleetwood Mac, this year she enters the Hall of Fame as a solo act.

On hand to induct Nicks was Harry Styles. The pop star and former One Directioner is a longtime fan of Nicks and his own music often channels the rock era of the ’70s. Styles and Nicks previously performed together live, and have since established close bonds — Nicks even once described Styles as “the son I never had.”

In his induction speech, Styles was quick to point out that Nick was the first woman to be inducted twice. “She is forever current. She is forever Stevie,” he remarked. “On Halloween, 1 in 7 people dress as Stevie Nicks. She is both an adjective and a verb. To quote my father, ‘That was so Stevie nicks.’ And to quote my mother, ‘I Stevie Nicks-ed that shit so hard.'” You can read Style’s full speech below.

During her own speach, Nicks said, “I hope… what I am doing is opening up the door for other women to go like, ‘Hey, man, I can do it too.'”

Prior to her induction speech, Nicks played a brief set that included “Stand Back”, “Leather and Lace” with Eagles’ Don Henley, “Stop Draggin’ My Heart Around” with Styles, and “Edge of Seventeen”. Watch clips of the performance here.

VIDEO || Harrys speech about Stevie Nicks at the #RockHall2019 ! (2) pic.twitter.com/cyQsysxbI2

This year’s Rock & Roll Hall of Fame class also includes Radiohead, The Cure, Janet Jackson, Roxy Music, Def Leppard, and The Zombies. Find full coverage of the ceremony here. Video of the full event will be broadcast on HBO on Saturday, April 27th.

Nicks’ catalog of vinyl releases is extensive (but worth owning!), and can be found here.

Stevie Nicks is the first female artist to be inducted into the Rock and Roll Hall of Fame a second time. First, with Fleetwood Mac, and now for her unforgettable solo work. With Stevie, you’re not celebrating music from long ago through the mists of time. She was standing on stage headlining a place doing her best work just three nights ago. She is forever current. She is forever Stevie.

She’s so wise and serene. She sees all the romance and the drama in the world and she celebrates it. She will stand on stage introducing a song, telling you how she wrote them — honestly — like you’re the only other person in the world. You’re more than a fan. You are a friend. And the words say in so many ways: I understand you and you are not alone. And that is true Stevie.

She walked a path created by Janis Joplin, Joni Mitchell — visionary women who had to throw a couple of elbows to create their own space. Her early band Fritz opened for Jimi Hendrix and they held their own. She was far ahead of her time, creating her own sound; it was bright, it was fresh, it was magical. Next, she formed a duo with Fritz’ bassist Lindsay Buckingham. Then on New Years’ Eve 1974, Mick Fleetwood invited Lindsay Buckingham and herself to join Fleetwood Mac and everyone’s lives became brilliant and a lot crazier.

Stevie Nicks stepped onto the world stage with unforgettable ease. I remember it well!

She began creating stories that flowed from her heart to her pen, which ended up in our souls, with characters we’d always remember. Classic songs like “Silver Springs”, “Rhiannon”, “Gypsy” and “Sara”. In the 1980s she released Bella Donna — as powerful as the supergroup she was still in. With “Stop Draggin’ My Heart Around”, she and Tom Petty took things to another level. Then she did it again with albums like The Wild Heart and Rock A Little. She went out on her own. It’s probable that at some point she found herself in a barbershop quartet. Stevie can do it all, and that is true Stevie.

You can’t take your eyes off of her, as we’ve seen tonight. She is the magical gypsy godmother who occupies the in-between. It’s a space that can and will only ever be hers. She’s a lot like a rock ‘n’ roll Nina Simone — finding the notes that only she can. And by being so unapologetically herself, she gives others permission to do the same. That is true Stevie.

If you’re lucky enough to know her, she’s always there for you. She knows what you need, advice, a little wisdom, a blouse, a shawl — she’s got you covered. Her songs make you ache, feel on top of the world, make you want to dance, and usually all three at the same time. She’s responsible for more running mascara — including my own — than all the bad dates in history combined. That is true Stevie.

There are few people that hold the stage like her. I was lucky enough to play with her at the Troubadour a few years ago, and all I could do was watch. The show is no longer yours, it’s hers, and you take a knee as she takes it from you, and that is true Stevie.

She has many solo hits: “If Anyone Falls”, “Edge of Seventeen”, “Talk to Me”. But there are so many gems within the albums, songs like “Belle Fleur” and “Garbo”. “Annabel Lee” and “Ooh My Love”. However you feel, or want to feel, there’s a Stevie Nicks song that will meet you there. Each song is a dance, an emotional ballet, a letter to a lover or a friend. And every single year, she gathers more momentum.

Somewhere around 2005, 2006, this woman became God. I think we can all agree on that. On Halloween, one in seven people dresses as Stevie Nicks. She is both an adjective, and a verb — to quote my father, “That was very Stevie Nicks!” or to quote my mother, “I Stevie Nicks’ed that shit so hard.” Mick Fleetwood calls her the “fearless leader.” She is “Mama Lion” to her friends. She is the family member that you can always count on. I hope she knows what she means to us, what she means to yet another generation of artists who look to her for inspiration and trailblazing courage. That is true Stevie.

She is more than a role model — she’s a beacon to all of us. Whenever you hear her voice, life gets a little bit better. When she sings, the world is hers, and it is yours. She is everything you’ve ever wanted in a lady, in a lover, in a friend.

Stephanie Nicks, I love you. We all do. And that is true, Stevie. Ladies and gentlemen, It has been an honor to be here with you all tonight, please join me in welcoming to the Rock and Roll Hall of Fame, Stevie Nicks.