Song of the Week: Solange Sits at the Head of the Table on “Almeda”

by Parker Reed and Brad Dountz 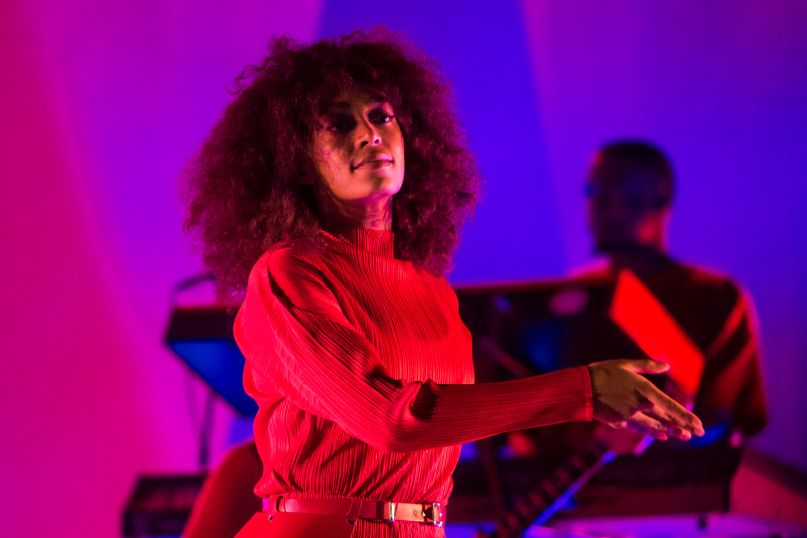 It must be hard being Beyoncé’s little sister. Solange will always be in Queen Bey’s shadow, even when she tries to branch out, but it’s that drive for individualism that leads to exceptionalism on “Almeda”. Solange boasts a long list of African-American attributes to the point where it’s impossible not see a clear portrait of what she is talking about. In order to get the right kind of canvas to express herself on, she heads back to her hometown of Houston and draws inspiration for the song’s structure from the city’s rich musical culture.

Playboi Carti acts like a perfect vessel and foil to Solange as he boasts of the luxuries he now experiences due to his fame and success. “When I come around, they don’t talk down/ Diamonds they shine in the dark now,” he relates about how others see him, suggesting that respect can be the best kind of reward. Pharrell’s production stays light without losing its essential edge, his thumbprint on the past still visible after all these years. Solange may never quite reach the same stratosphere as her sister, but that just allows her to rule the unique world she has created on her own.

The five years between Turn Blue and their latest single has done The Black Keys well. “Lo/Hi” is not the band’s most inspired material, nor does it have to be. Both the production and Dan Auerbach’s vocals are smoother than ever, something that actually benefits the track’s rump-shaking attitude. As a preview of what’s hopefully to come, “Lo/Hi” is promising as hell. —Parker Reed

Mac DeMarco realizes he can’t go back to his old life in this cozy, little number that teases his new album out in May. The stable guitar strumming feels so homegrown and the minute production wrangles all the pieces into a deeply satisfying package. —Brad Dountz

These new Vampire Weekend tracks are proving to be more off-kilter than one might suspect after jumping to Columbia Records. The synchronized guitar/bass/vocal lines are uber charismatic, even by Ezra Koenig’s standards. A touch of jam-band mentality is doing the band wonders in terms of keeping fresh, but still staying true to the group’s signature vibe. —Parker Reed

The pedal steel on “Room Temperature” is enough to make you swoon. If that doesn’t do it for you, then the roomy vocals from Faye Webster repeating, “I should get out more” should push you over the edge. By the time the track wraps, Webster will have you praying for that sweet sunshine. —Parker Reed

Billie Eilish – “Wish You Were Gay”

It’s not every day you get such delicate, acoustic balladry on such a robust song, especially from a 17-year-old. Billie Eilish sings just above a whisper before she wails about the heartbreak of not being with the one you love. The title suggests a candidness that drives the song well after its 3:42 runtime. —Brad Dountz

Stephen Malkmus – “Come Get Me”

A chugging piece of slacker rock, Stephen Malkmus’ latest release seems to have a hollow body. Thematically, a large skeleton that holds nothing inside, “Come Get Me” lends a sense of isolation to an otherwise clangy cut. —Parker Reed

Local Natives truly thrive when they buy into their substantial choral structures, and it’s a blast hearing them belt out haunting up-tempos. The lyrics “I don’t wanna die before I learn to live” show the band is still hoping that a better ending is waiting for them in the near future. —Brad Dountz

When Pharrell produces and Kendrick Lamar lends his legendary flow, it’s a foregone conclusion you have a true banger on your hands. The rolling chillness and chemistry between Lamar and Epps resembles two kings enjoying each other’s company and all their spoils. —Brad Dountz

With jagged production that seems to purposefully bump into everything around it, Freddie Gibbs’ collaboration with Madlib has a unique vibe that’s aggressive, but could still be played comfortably in a bedroom. —Parker Reed