Song of the Week: Anderson .Paak Breaks Out With a Smooth Protest On “King James” 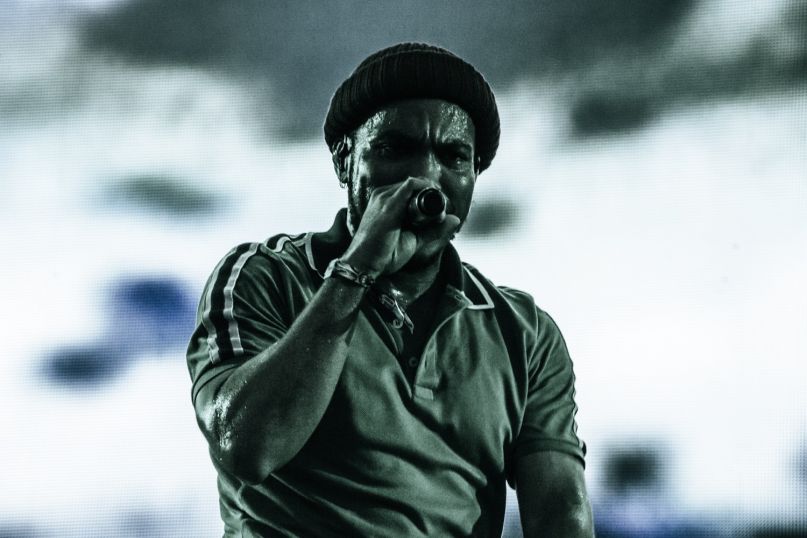 Coming hot off the heels of 2018’s Oxnard, Anderson .Paak isn’t hesitating when it comes to releasing new material. “King James”, the first single from .Paak’s upcoming fourth album, Ventura, features the same kind of smooth, soul-inspired hip-hop that we’ve gotten to know so well from the young multi-instrumentalist.

The lyrical content is a direct dedication to four-time NBA MVP LeBron James and all the contributions he has made to communities across the country, despite the many walls that have been put in his way. The wall here is both metaphorical and physical as .Paak eludes to other hot-button issues, such as President Trump’s border wall and the protests of NFL quarterback Colin Kaepernick.

“There’s nothing new or sharp about the cutting edge,” .Paak cracks. “If they build a wall, let’s jump the fence, I’m over this.”

For as on-the-nose many of his lyrics are, the music backing them remain as bouncy and groovy as ever. A smooth offering from a saxophone and a fun sample of a referee’s whistle distinguish the track from .Paak’s other similar offerings. If .Paak remains as confident as he is at this moment, it’s clear that he believes he could one day enter the same tier of industry admiration that “King James” himself receives.

Morrissey’s enthusiasm for this Jobriath tune gives it a nice bit of spice you didn’t know it needed. Ed Droste of Grizzly Bear isn’t shy next to Morrissey in their solid partnership and it comes off as powerful. This jam can surely to keep you leveled. -Brad Dountz

“Yellowbrick” is a song that takes its time, shifting gears every minute or so, but allowing itself to expertly linger each time within the carefully constructed and chromatic world Ric Wilson has created for his listeners within its three-minute span. -Laura Dzubay

A lovely slice of indie-rock with some amazing horn and synth arrangements, Broken Social Scene’s latest offering of 2019 lands to stellar results. As epic as it is smooth, it’s safe to say we shouldn’t expect anything less than excellent from one of the genre’s more consistent groups. -Parker Reed

A strong beat about love is pretty standard in pop, but Grimes has a superpower to transform a simple song into a fullblown emotional fueled confessional. Supersweet vocals and glittery soundscape only barely masks the eeriness Grimes naturally projects. -Brad Dountz

Poet and musician Jamila Woods spins gold on this glossy new hip hop track inspired by the legacy of Eartha Kitt, leveraging self-esteem against negotiations of interpersonal relationships with pressing questions like, “Who gonna share / My love for me / With me?” -Laura Dzubay

Take a listen to Lust for Youth and go back in time to a 80s dance club. Foreboding synths and instrusive guitars call back to Echo & the Bunnymen and Depeche Mode, so it gives you enough leeway to either be take it all in or get out on the floor and bust a move. -Brad Dountz

As if Lizzo couldn’t already get more iconic, she then goes and recruits Missy Elliott to join her on a trap banger about body acceptance and how she needs heavy-hitting beats to keep up with her “twerk-skills”. It’s in your face, it’s confident as hell, it’s Lizzo. -Parker Reed

For as lovely as every piece of “Sisyphus” is, there remains a sinister, unseen underbelly that attracts a listener like a moth to an electric bug-zapper. The track’s whimsical whistles and bouncy basslines pair surprisingly well with lyrics about a mythological Greek tale of scheming and betrayal. -Parker Reed

The simplistic beauty of Damien Jurado’s romantic poem is the kind of thing that haunts your eardrums. Jurado’s delicate guitar chords become more dense in the most subtlest ways. “Let me be the first to tell you/ I would give up my life” shows his desperation, but also his bravery. You can’t ask much more from someone than that. -Brad Dountz