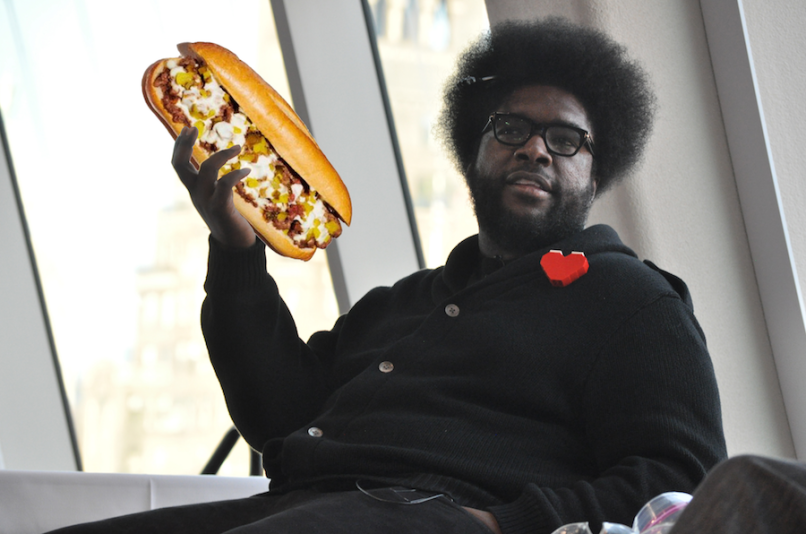 He’s curated a symphonic Prince tribute. He’s interviewed a beloved former First Lady. He’s the musical director of the most recognizable and accomplished band in late night. For his next trick, Questlove is making vegetarian cheesesteaks.

Yes, Quest has launched a new food company that specializes in Impossible cheesesteaks. The Roots drummer has been an investor in Impossible Food Inc., the plant-based sustainable food company, since 2017, a year after the launch of the popular Impossible Burger. Now, he’s using the product to put a vegetarian spin on the classic Philadelphia sandwich.

Questlove’s Cheesesteaks — yes, that’s what they’re called — will launch this summer at Citizens Bank Park, the home ballpark of The Phillies baseball team. Beginning on opening day, March 28th, and during all 81 home games for the team, fans can pick up the meat-less, cheesy wonders behind Sections 108 and 120. Non-Philly-based non-baseball fans can also get their hands on Quest’s creation as 40 LiveNation venues around North America will also serve up the cheesesteaks at their concession stands.

In a statement, Questlove said,

“We first tested this product at our annual Roots Picnic music festival in Philly in 2018. Without any forewarning we offered the Cheesesteak in our VIP area which was mainly populated with friends and family and no one believed me when I told them the ‘meat; was not beef, but plant-based. My team and I saw an opportunity to roll out the product on a much larger level. To have the Phillies and LiveNation as our initial partners is great as it speaks to my love for my hometown of Philadelphia combined withmy love of music. However, the goal for this product is to create a global network of restaurants, venues, and retail locations where Questlove’s Cheesesteak can be purchased.”

Dipping into the food industry isn’t actually a huge leap for The Roots member. He regularly hosts “Food Salons,” dinner parties that bring together acclaimed chefs, diverse creatives, and thought leaders. And in 2016, he released somethingtofoodabout: Exploring Creativity with America’s most Innovative Chefs, a book that ended up nominated for the James Beard® Foundation Book Award for Nonfiction and won an AIGA 50 Books | 50 Covers award.