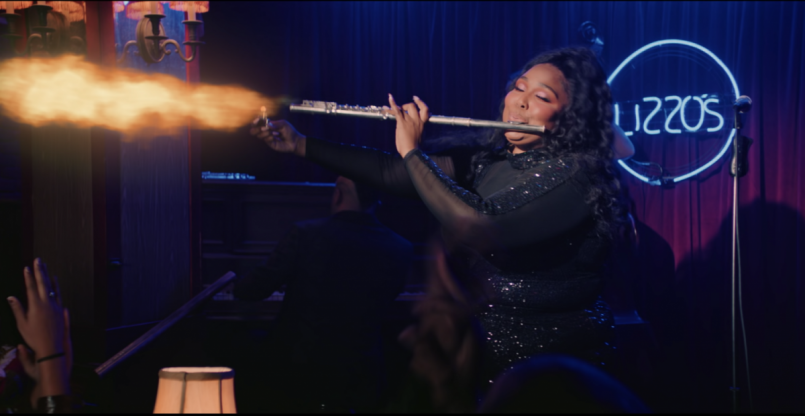 Lizzo's "The Legend of Lizzo"

Last fall, Lizzo issued the #FluteAndShoot challenge on social media, which Will Ferrell — taking on the role of Ron Burgundy — promptly accepted. Now, the rising musician and accomplished flautist has clapped back at the actor and comedian, Anchorman style.

It all began back when the rapper/singer highlighted her flute skills in a live video of her ripping a solo and then doing BlocBoy JB’s “Shoot” dance. After the clip went viral, Rob Burgundy responded in kind with his own woodwind performance, which Lizzo posted to Instagram.

Catch up on those clips first:

HAVE U EVER SEEN A BITCH PLAY FLUTE THEN HIT THE SHOOT? pic.twitter.com/aVy3E6kIVF

In the latest addition to the saga, the “Good as Hell” singer has posted a clip titled “The Legend of LIZZO”, which finds the flautist performing alongside Este Haim and actor Rightor Doyle. In the video, Lizzo offers a shot-by-shot remake of the famed Anchorman jazz flute scene, complete in all its table-walking, bathroom-invading, flame-throwing glory. However, in the rapper’s version, she solos over “Juice”, the lead single off her forthcoming album, Cuz I Love You.

Lizzo is set to drop her latest record on April 19th via Atlantic Records, marking her third full-length release. To support Cuz I Love You, the performer will embark on a North American tour that spans April through June. Check out her itinerary below, and get tickets here.